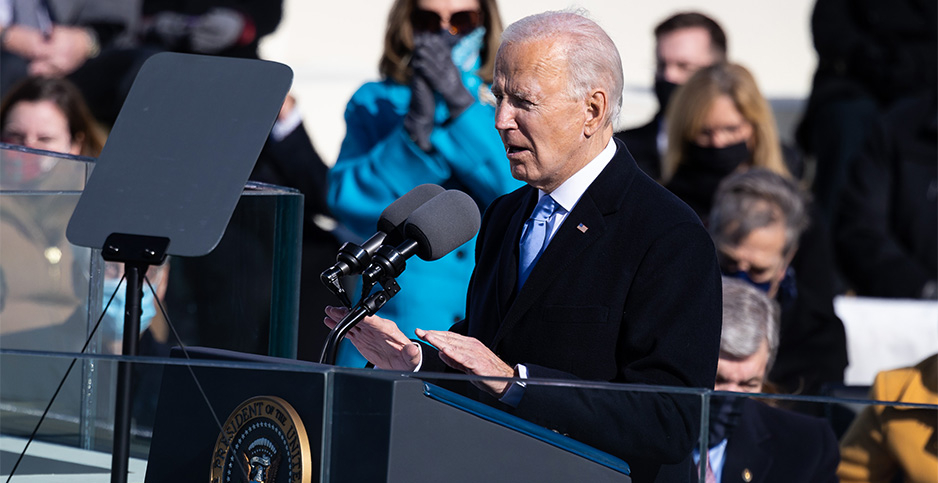 After the hottest year in the hottest decade, Joe Biden took office as 46th president of the United States yesterday in the blasts of a cold wind.

Biden cast his inauguration as a hopeful chapter for an imperfect time — a message that carried into the event’s smallest details.

The thick Bible used in yesterday’s ceremony has been in the Biden family since 1893, three years before scientists first quantified the global impact of the greenhouse effect. Biden was first sworn into the Senate in 1973, with the same Bible, when atmospheric carbon levels were 23% lower.

Now, as the coming decade will determine whether humans are able to cut emissions in half or, scientists say, face potentially catastrophic warming, Biden placed his hand on the Bible again and promised to unite America against climate change and other challenges.

"It’s time for boldness, for there is so much to do. And this is certain, I promise you: We will be judged, you and I, by how we resolve these cascading crises of our era," Biden said.

"Will we rise to the occasion is the question. Will we master this rare and difficult hour? Will we meet our obligations and pass along a new and better world to our children? I believe we must," he said. "I’m sure you do as well. I believe we will. And when we do, we’ll write the next great chapter in the history of the United States of America."

Much of Biden’s speech was aimed at healing divisions and fostering unity, a rhetorical trademark that defined his 2020 candidacy and a potential imperative for passing climate policy through a narrowly divided Congress.

Republicans, for their part, focused less on the speech than Biden’s flurry of first day executive actions — potentially demonstrating the limits of Biden’s ability to smooth over the ideological forces dividing Washington.

"We must end this uncivil war that pits red against blue, rural versus urban, conservative versus liberal," Biden said.

"We can join forces, stop the shouting and lower the temperature," he said. "For without unity, there is no peace — only bitterness and fury. No progress — only exhausting outrage."

Embedded in his calls for unity were the outlines of what the president might see as the limits to reconciliation.

Biden denounced "lies told for power and for profit."

That phrase evoked his September speech during the peak of California’s record wildfires, when he derided President Trump’s style of "unconscionable" climate denial that favored "Big Oil." It was also a way to acknowledge the rioters who stormed the Capitol this month in an effort to overturn his election win.

"Recent weeks and months have taught us a painful lesson. There is truth and there are lies, lies told for power and for profit. And each of us has a duty and responsibility, as citizens, as Americans and especially as leaders — leaders who have pledged to honor our Constitution and protect our nation — to defend the truth and defeat the lies," Biden said yesterday.

"The cry for survival comes from the planet itself, a cry that can’t be any more desperate or any more clear," Biden said.

Saying that climate deniers cannot avoid wildfires and droughts, Obama in 2013 stressed that "we cannot cede to other nations the technology that will power new jobs."

He nodded to the economic precarity that’s gripping workers from the oil patch to restaurant kitchens.

"Look — I understand that many of my fellow Americans view the future with fear and trepidation," Biden said.

"I understand they worry about their jobs. I understand, like my dad, they lay in bed at night, staring at the ceiling, wondering: Can I keep my health care? Can I pay my mortgage? Thinking about their families, about what comes next. I promise you, I get it."

The president referenced the Civil War, the Great Depression and other moments of peril to argue that unity is worth pursuing.

"I know speaking of unity can sound to some like a foolish fantasy these days. I know the forces that divide us are deep and they are real, but I also know they are not new. Our history has been a constant struggle between the American ideal that we’re all created equal and the harsh, ugly reality that racism, nativism, fear, demonization have long torn us apart. The battle is perennial and victory is never assured," he said.

"In each of these moments, enough of us have come together to carry all of us forward," Biden said. "And we can do that now."

Among Republicans, Biden’s calls for unity receded beneath the tsunami of his day one actions, including rejoining the Paris Agreement and rescinding federal approval for the Keystone XL pipeline.

"If you listen closely, you can hear the communist government in China popping champagne," Rep. Dan Crenshaw (R-Texas) said in a statement.

"Biden plans to kill jobs and raise your energy prices, and for what? Not the environment. Canceling this pipeline does nothing for the environment. It is for his radical base. He’s appeasing them on day one," he added.

Environmentalists praised Biden’s moves, but many were waiting for him to do more, such as blocking or rolling back Minnesota’s Line 3 pipeline and the Dakota Access pipeline.

While Biden’s early moves are important, "they are also very symbolic for the movement. They’re a way of saying, ‘We’re listening, we hear what you want, and we’ll move in that direction,’" said Leah Stokes, a professor of energy policy at the University of California, Santa Barbara.

Indeed, Biden’s talk of unity might have found its greatest purchase on the left. After a bitter primary, climate activists have found themselves wielding more influence over the Biden administration than their counterparts in other movements.

"We hope these actions signal what the American people need an administration leading the transition to a clean energy economy," David Turnbull, strategic communications director at Oil Change International, said in a statement.

Along with the officials he’s hired to oversee the climate portfolio, Stokes said, "the Biden administration is signaling with everything they’re doing so far that they are up for the challenge."

The durability of progressive unity is an open question. The Sunrise Movement has planned a day of action today in order to pressure Biden and Democratic leaders to use their full power for transformational change.

"Know this — there is no unity without delivering real action on the crises that impact all Americans. And there is no healing without accountability for the harms that have been done, not just in the last four years, but over the last four hundred," Mattias Lehman
, Sunrise’s social media coordinator, said in an email to supporters.