Timing may limit use of bird law in Calif. oil spill case 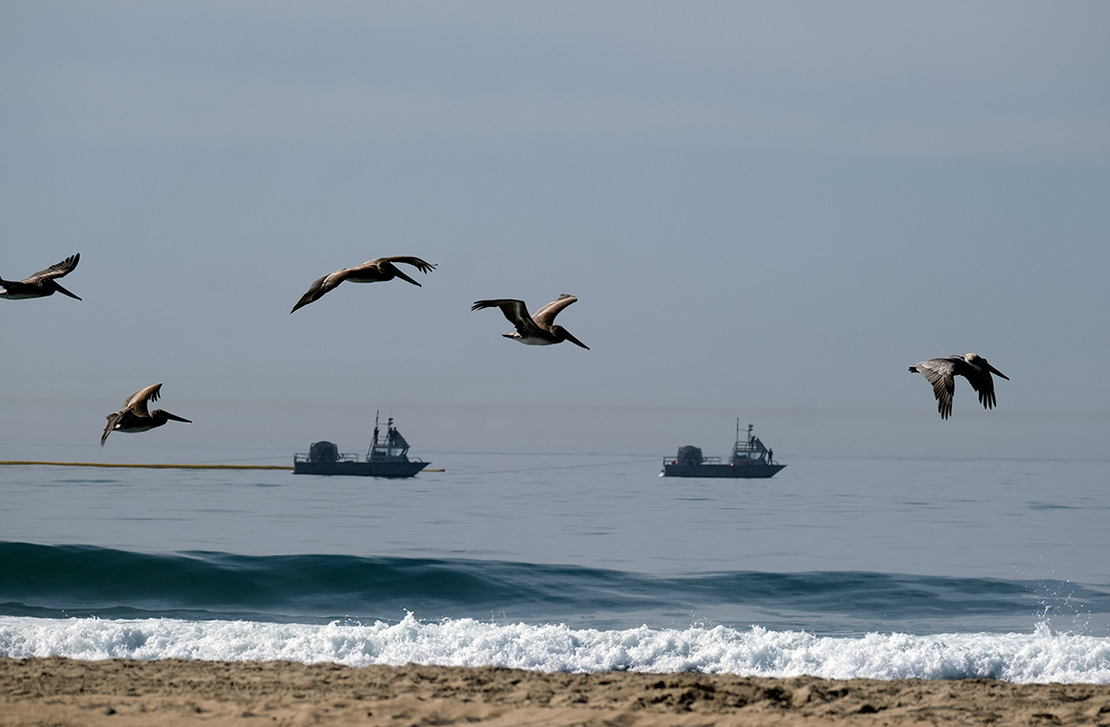 Pelicans are pictured flying over the beach Sunday after an oil spill off Huntington Beach, Calif. In the background, vessels with the Marine Spill Response Corp., an oil spill removal organization, are seen deploying floating barriers to contain the oil. Ringo H.W. Chiu/AP Photo

The timing might complicate any effort to directly apply the federal migratory bird law to the parties responsible for the California spill that occurred while prior rules imposed during the Trump administration were still in effect.

But starting Dec. 3, the Fish and Wildlife Service will return to implementing the law as prohibiting incidental take of more than 1,000 protected species. That means companies could again be held liable for activities that accidentally kill migratory birds (Greenwire, Sept. 29).

“Migratory bird conservation is an integral part of the Fish and Wildlife Service’s mission,” agency spokesperson Vanessa Kauffman said yesterday, calling it “a critical step in ensuring a continued progressive path towards commonsense standards that protect birds and their habitats."

As of yesterday, the Oiled Wildlife Care Network reported that 19 live oiled birds and five dead oiled birds had been detected following the leak, which occurred roughly 5 miles off the Orange County coast.

The injured birds include migratory species such as the snowy plover, five of which have so far been discovered covered in oil since the pipeline rupture was discovered last weekend.

The cause of the spill remains under investigation.

Jason Rylander, senior counsel with Defenders of Wildlife, told E&E News that it’s “an open question” whether the Migratory Bird Treaty Act could be enforced in the California oil spill case.

“But it emphasizes how, as with past oil spills, the MBTA has an important role to play,” Rylander added. “Funds from penalties … could be used to help restore wetlands and other impacted areas, [and] the threat of penalties is an important disincentive to industrial negligence.”

Potentially, other federal laws that protect natural resources, including the Endangered Species Act, Bald and Golden Eagle Protection Act and Oil Pollution Act, as well as a number of state laws, may apply in the California case.

“However, for oil spills such as the BP Deepwater Horizon Gulf oil spill and the Exxon Valdez oil spill in Alaska, significant penalties were levied in addition to those calculated under natural resource damage assessments based on incidental-take liability under the MBTA,” the Fish and Wildlife Service noted earlier this year.

The agency has also pointed out that it “will apply enforcement discretion” with the law.

A FWS director’s order further explained that the agency “prioritizes the following types of conduct for enforcement: Incidental take that is the result of an otherwise illegal activity, or incidental take that results from activities by a public- or private-sector entity that are otherwise legal, is foreseeable, and occurs where known general or activity-specific beneficial practices were not implemented."

The 1918 Migratory Bird Treaty Act prohibits the unauthorized taking of what is now a list of 1,093 species of migratory birds.

Courts have interpreted the ambiguous text in different ways.

In 1998, for instance, the Moon Lake Electric Association in Colorado was charged with taking 12 golden eagles and other birds that landed on power poles providing electricity to an oil field. In refusing to dismiss the charges, the trial judge determined that "the MBTA does not seem overly concerned with how captivity, injury, or death occurs."

By contrast, the Trump administration’s Fish and Wildlife Service published a final rule that limited the 1918 bird protection law to apply only to intentional acts. The Biden administration has revoked that rule and rescinded the prior solicitor’s 2017 opinion restricting the law’s reach.

Erik Schneider, policy manager of the National Audubon Society, said, "While the decisions about the application of the MBTA will ultimately be determined by the federal authorities, it is yet another reminder of why efforts by the Biden administration and in Congress to restore and strengthen the law are so important."