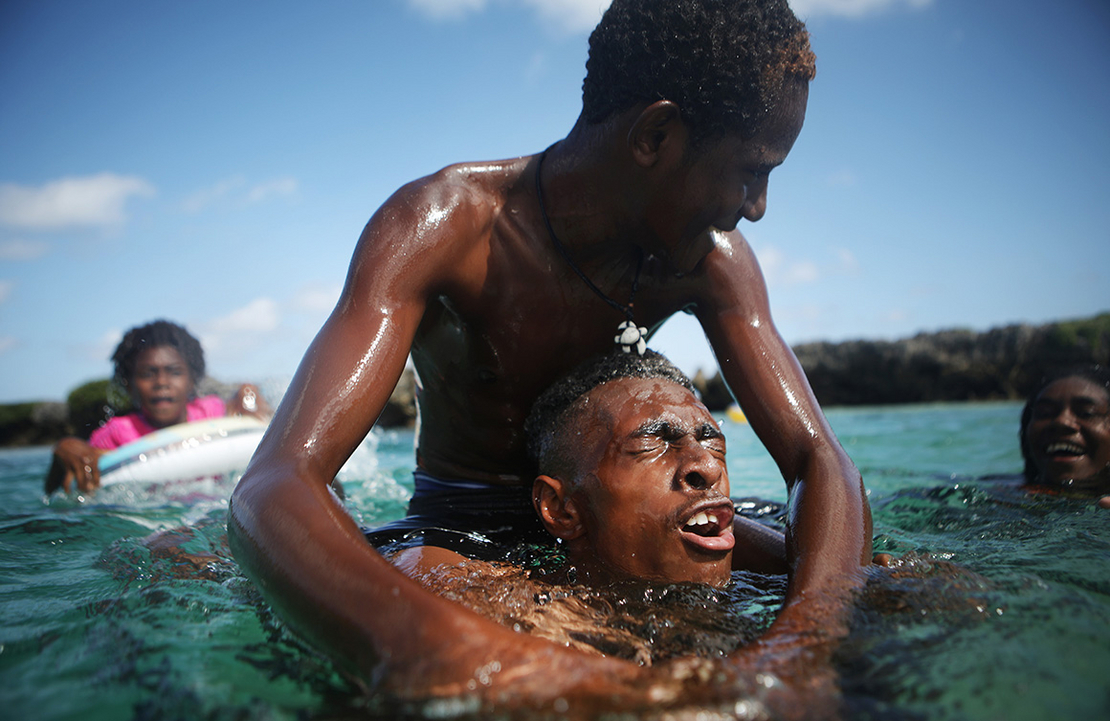 People swimming at Eton Beach in Efate, Vanuatu. Satellite data shows that the sea level has risen about 6 millimeters (0.24 inch) per year around Vanuatu since 1993, a rate nearly twice the global average. Mario Tama/Getty Images

The Pacific island nation of Vanuatu has submitted ambitious climate targets to the United Nations that break new ground on how the disaster-prone country intends to deal with global warming.

Among the highlights are Vanuatu’s plans to generate nearly 100 percent of its electricity from renewable energy by 2030. But two areas that really stand out are Vanuatu’s holistic approach to adaptation and the road map it lays out for addressing the irreparable harms of climate change — a calamity Vanuatu did almost nothing to cause.

“Through no fault of its own considering its negligible contribution to global greenhouse gas emissions (0.0016%), Vanuatu is already experiencing devastating effects of climate change,” the plan states.

Officials there estimate that a cyclone that swept across Vanuatu in 2020 led to more than $600 million in damages — around 60 percent of its gross domestic product — with billions of dollars lost over the past decade due to the slow-onset effects of climate change, such as erosion caused by rising seas and warming waters that kill off coral reefs.

Those damages are fueled by a changing climate that largely was caused by greenhouse gas emissions from economic giants such as the United States — and more recently growing economies like China and India. Vanuatu’s tabulation of those financial impacts speaks to a broader international issue: how to compensate countries suffering from the irreparable impacts of climate change, a situation known in U.N.-speak as “loss and damage.”

Vanuatu is one of many climate-vulnerable countries currently pushing for a loss and damage finance facility separate from the pool of money that rich nations have pledged to provide developing nations for clean energy development and adaptation. The money then could be used to support mechanisms such as climate insurance for housing, infrastructure, crops and other assets, or to address the needs of people displaced by climate disasters — all things Vanuatu has included in its loss and damage targets.

“Where U.N. mechanisms are unable to provide adequate relief from loss and damage resulting from the negligent actions of fossil fuel-related companies and the states that subsidise them, Vanuatu will seek redress elsewhere,” the plan states. Vanuatu submitted it to the U.N. earlier this month.

Preety Bhandari, a senior adviser in the Global Climate Program at the World Resources Institute, described the way the plan has been presented as “groundbreaking” and said its approach is proactive in terms of what needs to be done now and in the future.

“It is very action-oriented, very targeted, and it is taking a very all-encompassing approach to the extent it has looked at the links with the existing sectoral policies, existing national sustainable development programs and, more importantly, the link it is making to the [U.N.] Sustainable Development Goals,” she said.

Vanuatu is one of just a dozen or so countries that have revised their targets, despite agreement among nearly all of the world’s nations to come to climate talks this year with enhanced commitments to tackle the causes and impacts of global warming.

The revision of what Vanuatu plans to do to fight climate change — what’s known as its nationally determined contribution, or NDC — could spark greater action from polluting countries with more resources, say observers.

Vanuatu considers itself carbon negative, meaning it absorbs more carbon dioxide through its forests and surrounding ocean than it produces. But that hasn’t stopped it from addressing fossil fuel-based energy and other sources of carbon pollution.

Its emphasis on everything from electric buses to energy efficiency to dealing with the irreparable harms caused by rising temperatures also makes it a standout that analysts say could serve as a model for other climate-vulnerable countries to follow.

“For a small country, they’ve really shown such tremendous leadership on this issue,” said Bhandari.

Many country-based targets traditionally have focused on reducing the greenhouse gas emissions responsible for warming the planet.

And it goes beyond infrastructure to consider impacts on people and nature, with significant emphasis placed on equity, gender, social inclusion, and cultural and traditional values. On adaptation alone, it looks at everything from agriculture and tourism to the role of youth and policymaking.

The plan labels biodiversity “vital for our survival” and states that understanding the impacts and effects of climate change on its surrounding ocean “will influence how we use and value our coasts and seas both now and in the future.”

Achieving its targets will depend on funding and support from developed nations, with the large majority of the estimated $1.2 billion price tag conditioned on outside financing, action, support and technology development. Around 60 percent of that amount will go toward adaptation, with $178 million set aside for loss and damage compensation.

Bhandari said the detailed way Vanuatu’s plan breaks down the costs is significant and could make a difference in how climate finance flows are calculated in the future.

“Politics will always be part of it, but the more clarity there is in the demands and the asks, the relatively easier it would be to come to some negotiated outcomes on financing the needs of developing countries, particularly the vulnerable ones,” she added.

Take gender. In Vanuatu, as in many places, women have key roles in sectors that make them vulnerable to climate change impacts, such as agriculture, forestry, water management and health. But that also enhances the role they can play in making those areas more resilient. The new plan sets aside more than $22 million for things such as women-led initiatives to support adaptation.

Many of the world’s most climate-vulnerable countries have fought to draw attention to how rising temperatures are threatening their very existence. But they have also led the way in showing that despite contributing little to the problem, they want to be a part of the solution, Bhandari said.

And Vanuatu long has been at the forefront.

Located more than 2,200 miles east of Australia, the South Pacific nation is composed of roughly 80 islands and is one of the world’s most vulnerable places to rising seas and extreme weather.

Vanuatu has been advocating for some type of fund or insurance mechanism to help compensate for the losses and damages vulnerable countries were incurring from climate-related disasters since the 1990s, Bhandari said.

It’s also been at the vanguard of efforts to seek legal redress for climate damages. Vanuatu currently is calling on the International Court of Justice to issue an advisory opinion on the legal obligations countries have to protect people from climate harm. And loss and damage finance is certain to take prominence later this year at international climate negotiations in Egypt.

Those types of actions then serve to push the world’s largest-emitting nations — and often its wealthiest — to do more, Bhandari said.

“If we can get more of these examples out and create more of a positive environment, rather than a blame game, I think that that would go a long way in creating something which is more amenable to a collaborative [approach],” she added.