Tires are big emitters. EVs could worsen their pollution 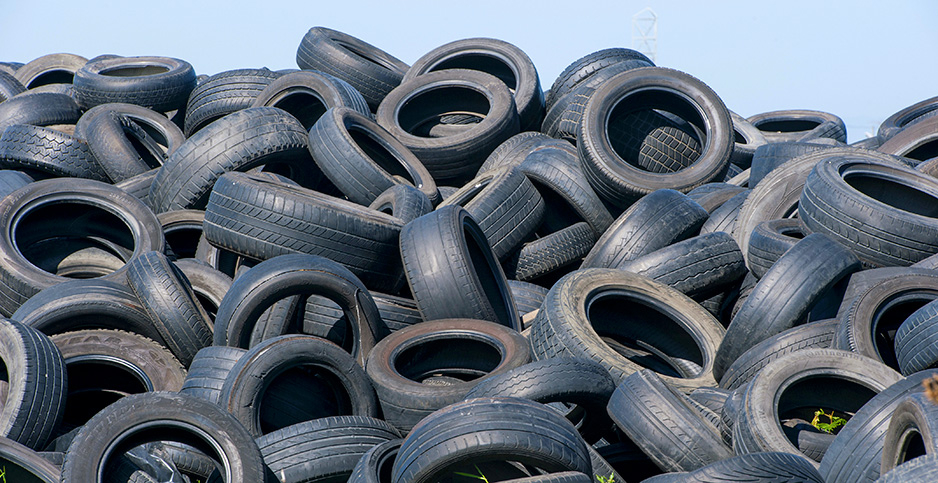 The sun beats down on a pile of used tires in Cape Town, South Africa. Rodger Shagam/agefotostock/Newscom

The tire industry has a sustainability problem and electric vehicles could make it worse, experts say.

The production of tires is an emissions- and resource-intensive process. In 2017, U.S. tire facilities reported releasing more than 3.5 million metric tons of heat-trapping carbon dioxide, according to data compiled by an industry trade group. That’s a carbon footprint roughly equivalent to Congo, a nation of nearly 87 million people.

But the problems associated with tires don’t end once they leave the factory.

Independent researchers have found tires are the second-largest source of microplastic pollution, behind only synthetic textiles. While some upstart groups are working on new approaches to reduce the emerging contaminant, the sustainability efforts in the tire industry primarily have focused on improving tire recycling.

At the same time, consumers and governments are increasingly embracing electric vehicles because of their low emissions. But because EVs are heavier than internal combustion vehicles and accelerate more quickly, they are harder on tires and produce more microplastics.

"They don’t have a solution yet," Emilia Jankowska, a senior fellow at the environmental nonprofit Project Drawdown, said of the quest for a sustainable tire. "Those companies are not really talking about that, because they just focus on reducing [carbon dioxide] emissions, which is a big deal. But they are not also showing the whole story."

Jankowska, who is an expert on ocean plastics, was specifically referring to an announcement last week from two French companies.

Tiremaker Michelin and green chemistry startup Carbios touted their joint effort to produce and test recycled plastic tire fibers, calling the achievement "a major step toward developing 100% sustainable tires." If Michelin was to use those fibers in all the tires it produces, the tiremaker could recycle nearly the equivalent of 3 billion plastic bottles per year, they said.

Neither of those innovations, however, appear to reduce the tires’ release of microplastics, which are defined as pieces of plastic less than 5 millimeters long. When those tiny bits of plastic blow off roadways, they can be inhaled by people or wildlife. If they are washed away by rain, they can end up in rivers, lakes or oceans where they’re consumed by fish.

Little is known at this point about the potential human health impacts of microplastics. But research published earlier this year in the journal Science linked small concentrations of a chemical from tire microplastics to the die-off of some coho salmon in the Pacific Northwest.

Carbios directed questions about microplastics to Michelin, which didn’t respond to requests for comment.

The U.S. Tire Manufacturers Association, a group that advocates on behalf of Michelin, Bridgestone and other tiremakers, said its "members are committed to sustainable practices in every aspect of their businesses and embrace a shared responsibility of helping achieve a more sustainable society" but acknowledged microplastics are a challenge for the industry.

"There is no one size fits all approach to mitigating" microplastics from tires, Kim Kleine, the association’s spokesperson, wrote in an email. "A multifaceted approach is needed."

She suggested rebuilding America’s roads with "rubber-modified asphalt" and green infrastructure such as bioswales — a much more daunting task than reformulating tires. Those changes could reduce the wear on tires and could catch the microplastics that rub off before they could flow into waterways.

"It’s convenient for them," Ad Ragas, a professor of environmental science at the Netherland’s Radboud University, said of the industry’s infrastructure overhaul proposal. "They’ve always said, ‘We don’t see a good alternative for the development of the tire, we see the solution in product mitigating.’"

Ragas was part of a team of researchers that in 2017 estimated tires were responsible for at least 5% of the plastics in the ocean and 3% of the particulate matter in the atmosphere. Their paper was published in the International Journal of Environmental Research and Public Health.

Other researchers and entrepreneurs are working on ways to either catch microplastics before they reach the road or overhaul the tiremaking business model.

The Tyre Collective, a company launched by four master’s degree students at Imperial College London and the Royal College of Art, is looking to commercialize an award-winning device that fits around the back of a tire and sucks up the particles it gives off.

Another London outfit, Enso, is creating tires specifically for heavier EVs, which the company would own and lease to customers. The durable designs will "tread lightly on our planet by keeping the rubber on the road and out of our air and oceans," its website claims.

Ragas suggested that, if autonomous vehicles become widely available, they might reduce the emissions and microplastics associated with driving.

"The self-driving vehicles, you can make them in such a way that they use their brakes less and that they do not accelerate very fast because that wears the tire out," he said.

Yet the best way to make tires more sustainable may be the simplest one, according to Jankowska, the Project Drawdown oceans expert: "Just drive less kilometers."

"I know it’s very hard to change people’s behavior," Jankowska added. But that would be "the most powerful solution."