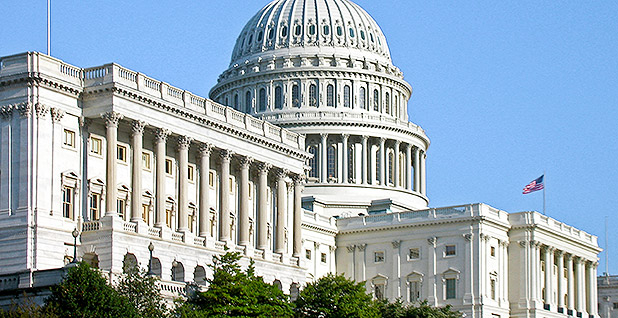 Congress has a long to-do list after recess, including spending bills. UpstateNYer/Wikipedia

As the clock ticks toward November, Congress’ legislative ambition once again finds itself on a crash course with election-year realities.

While the work continues on a number of unfinished big-ticket agenda items, the approach of the Nov. 6 midterm elections means lawmakers will spend more time away from the Capitol — and just as much time protecting themselves from the political perils of legislating when in town.

"If you believe the conventional wisdom around here, it’s done," Senate Energy and Natural Resources Chairwoman Lisa Murkowski (R-Alaska) said of the legislative outlook for the rest of the year, shaking her head.

"Think about that: to say that we’re really done legislating when you still have eight months left in your year, to just put everything on hold because of elections."

While the postelection lame-duck session is when the fates of multiple bills are likely to be resolved, the anticipated punt on key issues rankles lawmakers like Sen. Tom Carper of Delaware, the top Democrat on the Environment and Public Works Committee.

"There ought to be plenty of stuff that we can agree on," Carper told E&E News last week. "We shouldn’t just show up for work and get a paycheck. We ought to work and get things done. And that’s what I’m focused on."

The endgame remains unclear, but much of the next few months will be spent laying the legislative groundwork for that final push. Here are a few agenda items to watch:

Aided by a two-year budget deal, top House and Senate appropriators huddled this week to outline a strategy toward completing as much of the annual spending process as possible before the elections.

"Right now, we’re trying to look at maybe four or five bills that we could pass and not set off fireworks and see how we do," Shelby said.

Republicans are hoping to enlist Democratic support for a plan to allow the spending bills to get to the floor for debate.

"I’m hopeful that our colleagues on the other side will work with us to get them to the floor, offer amendments, debate them and vote on them," Sen. John Hoeven (R-N.D.), who chairs the Agriculture, Rural Development, Food and Drug Administration, and Related Agencies Appropriations Subcommittee, said last week.

Despite stated support by members of both parties for a return to regular order for appropriations, Shelby acknowledged the hurdles that lie ahead.

"A lot of us are going to have to show some discipline to not offer amendments just to cripple the bill," he said.

House Speaker Paul Ryan (R-Wis.) told reporters yesterday he wants to work with the Senate on fiscal 2019 appropriations, saying he and Senate Majority Leader Mitch McConnell (R-Ky.) "have talked about this quite a bit lately."

Ryan said there was a meeting planned with House members on the topic. "What we want to do is try and get appropriations bills in law before the fiscal year deadline," the speaker said.

Ryan said he wants to see a "functioning" appropriations process where the two chambers pass bills, go to conference and the appropriators "reconcile those bills" and enact them into law.

He added he was "excited about a new sense of commitment to this process" and that he believed "a lot" of the fiscal 2019 appropriations bills would be bipartisan.

Even if comity prevails, Congress is widely expected to simply extend current spending levels past the election through a continuing resolution, punting tough decisions into a lame-duck session when it’s clear which parties will control the levers of power in the 115th Congress.

House appropriators advanced the military construction and veterans spending bill yesterday. Many more are due after recess.

For all of President Trump’s promises of a $1.5 trillion infrastructure push, there are few concrete signs of tangible progress.

The president last month acknowledged that the push would likely have to wait until after the elections, and Senate Environment and Public Works Chairman John Barrasso (R-Wyo.) was noncommittal about timing last week.

Carper, who for months has signaled frustration over the slow pace of the push, said last week he’s not giving up on the effort.

"I think for a year and a half everybody has agreed that we ought to do a major infrastructure bill, including a real focus on transportation," he told E&E News. "And the idea that somehow we’re not going to have time to do that or be able to agree on anything is just mind-boggling."

Murkowski, who has eyed the infrastructure push as a vehicle to carry the bipartisan energy package, S. 1460, which she assembled with ranking member Maria Cantwell (D-Wash.), said last week that she was keeping her legislative options open.

"We think it’s perfectly suited" for the infrastructure bill, Murkowski told reporters after a hearing. "Whether or not that is going to materialize is anybody’s question right now. I don’t want to bank on that. I keep saying we have multiple tracks to pursue this."

However, members of both parties are more optimistic about the upcoming Water Resources Development Act bill, a popular measure that authorizes water projects affecting nearly every member’s district.

"I think that’s absolutely critical, given all the needs, certainly in Michigan and all across the country," said Michigan Democratic Sen. Debbie Stabenow.

Barrasso said EPW Republicans are working with Democrats on the bill, which he hopes to advance in the coming weeks.

Another must-pass measure is the farm bill, which touches large swaths of rural America as well as urban areas.

Stabenow, the top Democrat on the Senate Agriculture, Nutrition and Forestry Committee, said she and Chairman Pat Roberts (R-Kan.) are "committed to getting this done" but acknowledged tough roads ahead, given a host of controversial policies in the House bill.

"It’s always complicated," Stabenow said, noting that she has worked on multiple farm bills on both sides of the Capitol since being elected to the House in 1996. "I’ve never seen this."

Among the issues that must be sorted out with the House are disputed provisions over forest management and conservation programs (E&E Daily, April 18).

Hoeven, a member of the committee, called the farm bill a top priority for the year but acknowledged "it always gets tougher as we get closer to the election season."

There’s also the likelihood that lawmakers will look to attach unrelated measures to the farm bill if it in fact gets moving.

Murkowski said last week that at least some provisions of her bipartisan energy bill could find a home there. "It’s an option, maybe not for everything," she said.

Another key issue that may or may not see some resolution before the end of the year is the fate of a number of energy tax breaks for biofuels, alternative vehicles and energy efficiency, among others.

A hard-fought deal earlier this year extended most of the credits retroactively for 2017, rankling supporters from both parties, including many Senate Republicans on the Finance Committee, who were pushing for the breaks to be included for 2018 as well (E&E Daily, Feb. 9).

Sen. John Thune (R-S.D.), a member of the Finance panel who wanted a longer extension, said this week that the issue could flare up again in the upcoming debate over reauthorizing the Federal Aviation Administration — an outcome he would prefer to avoid to prevent that bill from becoming bogged down.

"But I’m hoping that we can do an extenders package as a separate exercise later in the year, and maybe that hitches a ride on whatever the year-end vehicle is," he told E&E News.

Another wild card issue that could come to a head before the end of the year is the Trump administration’s push to negotiate a new North American Free Trade Agreement.

The high-stakes effort is being closely watched in part because it would allow implementing legislation to pass the Senate by a simple majority — a procedural advantage that conservatives are hoping to use to enact sweeping regulatory reform bills (E&E Daily, April 17).