To study the Arctic, scientists leave a CO2 footprint 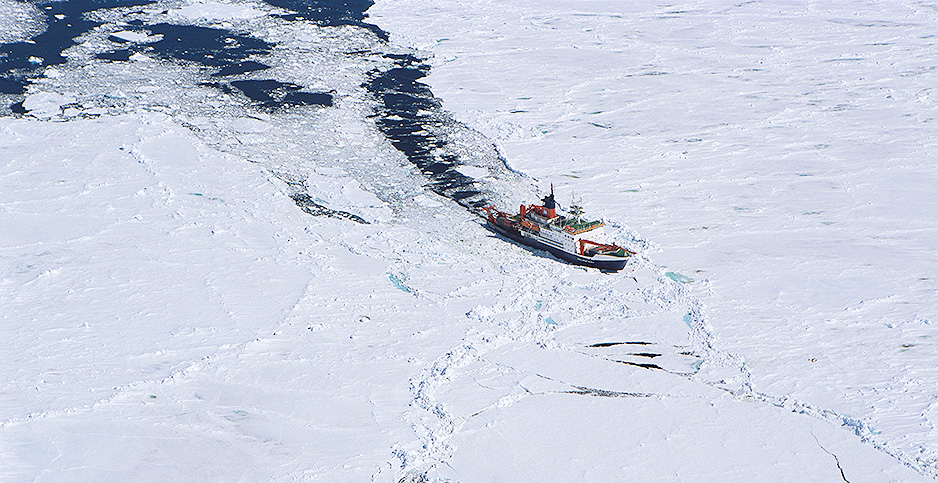 The icebreaker Polarstern moving through sea ice in 2014. The vessel is releasing emissions now as it carries climate researchers into the Arctic. Ingo Arndt/ Minden Pictures/Newscom

ON BOARD THE AKADEMIK FEDOROV — Flights between London and Tromsø, Norway, typically take only a few hours total. Instead, doctoral student Robbie Mallett opted for an arduous, eight-day journey by train, bus and boat.

First, the train from London to Brussels. Next, another train from Brussels to Amsterdam. Then, five hours of restless sleep in a hostel dormitory shared by seven surly strangers. "I thought I was gonna never make it out of there," Mallett said.

A bus to Hamburg, Germany, should have come next, but it never showed up, and Mallett was forced to take two separate trains instead. Then, an overnight bus ride from Hamburg to Oslo, Norway, followed by a breathtaking train journey over the mountains from Oslo to Bergen.

Finally, a scenic four-day boat ride from Bergen up the Norwegian coast to Tromsø.

For some, the adventure might have been reason enough for the multilayered trip. But Mallett, who was on his way to join an Arctic science expedition, had a more pressing concern on his mind: minimizing his carbon emissions.

Air travel accounts for less than 5% of global carbon emissions, according to most estimates. But it’s typically far more carbon-intensive than a journey of the same distance by land or by sea. And global flights are expected to significantly increase over the next few decades, raising concerns that their contributions to climate change may be on the rise.

"There’s a lot of people looking at me as the only climate scientist they know," said Mallett, a student at the Center for Polar Observation and Modeling at University College London. "So I have to walk the walk."

Mallett is careful about his carbon footprint as a matter of habit. Most of his family lives in New Zealand, and the London-based student hasn’t visited them in years out of concern about climate change.

But his recent journey to Norway may have had greater significance than usual.

The MOSAiC Expedition that Mallett joined in Norway is a 13-month voyage across the Arctic Ocean aimed at unraveling the mysteries of the Arctic climate system and its impact on the rest of the world (Climatewire, Sept. 18). It’s one of the biggest climate science expeditions in history.

Mallett isn’t the only one thinking about his carbon impact. MOSAiC involves contributions from hundreds of scientists all over the world. Many will travel from across the globe to participate, a significant number of them — including this reporter — by air.

It’s not just individual travel, either. At the center of MOSAiC is the German icebreaker Polarstern, a 400-foot-long, diesel-burning vessel that will carry the scientists and their equipment across the central Arctic for more than a year. The ship’s carbon emissions, its waste and its physical impact on the ocean and the ice are all issues that both the mission’s organizers and its participants must confront.

It’s the conundrum that occurs when environmental research must, inevitably, have some impact on the environment.

"I think that all scientists that are on the ship will really seriously try to limit their environmental footprint, both for the sake of the science, but just because it’s our philosophy," said Rolf Gradinger, an Arctic biology expert at the Arctic University of Norway and co-lead of MOSAiC’s ecosystem team.

MOSAiC’s complete environmental footprint would be difficult to estimate.

The mission requires travel from hundreds of participants; the shipping of countless scientific instruments and other equipment; the operation of those instruments in the Arctic; support from four other large ships, carrying supplies to and from the Polarstern; various aircraft operations, for both research and logistical purposes; and the day-to-day movement and operations of the Polarstern.

These activities produce both climate-warming carbon emissions and other types of pollution, and they also have a physical impact on the natural environment and the organisms that live there. Still, the mission’s organizers have taken some steps to limit its impact.

Polarstern, for its part, is already designed to minimize its environmental impact as it travels across the ocean, according to the ship’s captain, Stefan Schwarze.

The ship burns a low-sulfur diesel, designed to reduce air pollution, he said. Any waste that can be burned is incinerated on board, and the remains are carried back to shore.

Gray and black water, which includes sewage, is also treated on board and then released into the sea. The treated water is "as if you put fresh water into the ocean," according to Schwarze — although he noted it’s not drinkable.

For a climate-focused expedition, though, carbon emissions may be the more pressing issue.

MOSAiC will burn significantly less fuel than a typical Polarstern voyage of the same length, said Markus Rex of the Alfred Wegener Institute, head of the expedition. The mission relies on a unique design: As winter sets in, the Polarstern will allow the sea ice to freeze around it, locking it in place for the yearlong voyage. The natural drift of the ice will then carry the ship across the central Arctic. That means it won’t need to use its engines for propulsion, only for heating and power.

"There is no more environmentally friendly way to do research in the Arctic than to passively drift with the ice," Rex said. "Overall, we will reduce our CO2 emissions from Polarstern by about two-thirds during the expedition compared to any other operation of Polarstern."

Even so, the vessel is expected to burn about 6,000 metric tons of fuel over the course of its journey. Rex added that it’s "very likely" the expedition will apply carbon offsets to the Polarstern’s emissions.

There are also opportunities to use Polarstern’s environmental impact for further study, according to Matt Shupe, a research scientist with NOAA and the Cooperative Institute for Research in Environmental Sciences at the University of Colorado, Boulder, and co-leader of the expedition.

The expedition’s emissions will include black carbon, or soot, a form of pollution that can worsen the effects of climate change in the Arctic. When black carbon particles fall on snow or ice, they darken the surface and cause it to absorb more heat. Recent research has suggested that black carbon pollution, blown into the Arctic from other parts of the world, may already be speeding up the melting process in some areas.

Since these emissions are an inevitable consequence of the mission, some MOSAiC researchers will investigate their effects on the surrounding ice and snow — a way to "use our pollution to learn something about the changing Arctic," Shupe said.

The MOSAiC expedition exemplifies a dilemma increasingly faced by climate scientists. The work they conduct is critical for a better understanding of climate change, but carrying it out often requires hefty contributions of greenhouse gas emissions and other environmental consequences.

It’s an issue that scientists in various other fields have been confronting for ages, said global ethics expert Wouter Peeters, a lecturer at the University of Birmingham in the United Kingdom.

"I know that in biology, it is part of the methodology basically to minimize the impact on the animals over there," he said. "Anthropology, for example, also has this issue."

For climate scientists, he said, the goal should be the same.

They may also purchase carbon offsets for the emissions their work requires, he added. There’s some ongoing debate about the effectiveness of carbon offsets — but Peeters said that if emissions are unavoidable, using offsets is better than doing nothing at all.

And Mallett, the train-traveling doctoral student, suggested researchers should calculate carbon budgets for each project, in addition to financial budgets, as a matter of course.

"It wouldn’t necessarily make people do anything differently, but it would make them think different and realize the impact," he said.

Generally, though, many scientists are already thinking about these issues as they plan their projects, said Gradinger, the MOSAiC ecosystem co-leader. And among researchers studying the Arctic — the fastest-warming region of the planet — the problem is especially relevant.