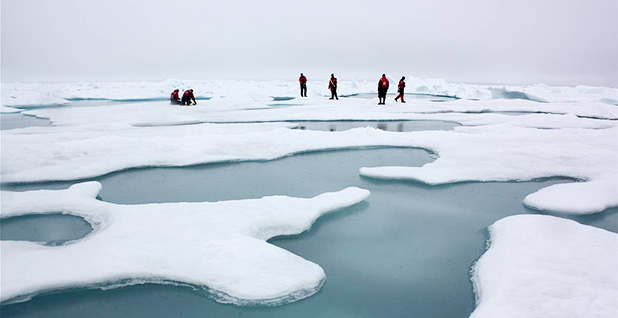 NASA scientists on a 2010 mission to the Arctic. Photo courtesy of NASA.

The Arctic is experiencing a profound shift into a new state as it loses ice and breaks high temperature records, a clear sign that some of the worst effects of climate change are already happening.

And as the region warms and ice melts, a new survey shows that sea levels may rise an additional foot on top of previous efforts if nothing is done to curb the amount of carbon dioxide put into the atmosphere.

The changes to the Arctic now being measured by scientists are so significant they will have implications across the globe, according to a report from the Arctic Monitoring and Assessment Programme. That could include worsening monsoons in Asia, extreme temperature records and the inundation of coastal cities.

Scientists have tracked a shocking series of changes to the region already, including alarming findings stumbled upon by accident. They’ve seen green ice, which warming oceans caused by thinning ice to such an extent that microorganisms could thrive at an unprecedented rate underneath. They recently found that river ice now disappears a month earlier than it used to just 15 years ago. They even found it shut off a river in just four days as a melting glacier cut off its water source.

The Arctic was always seen as a canary in the coal mine, the area that was going to change first because it is near the freezing point and so sensitive that a few degrees of warming can dramatically reshape the region, said Walt Meier, a research scientist at NASA’s Goddard Space Flight Center. It is sending a signal to the rest of the globe about a future because the pace of its transformation has been so rapid, he said. Sea ice is thinner, seasonal ice cycles are different, and even the ecology and food chain is experiencing disruption.

In the last year, scientists have sounded increasingly dire predictions about the Arctic. The National Oceanic and Atmospheric Administration announced yesterday in its 11th annual "Arctic Report Card," which noted record-low sea ice levels, that 2016 was the warmest year on record in the region. One researcher involved in the report said it showed the Arctic was "shouting change."

Some recovery is still possible

The latest update to the Snow, Water, Ice and Permafrost in the Arctic survey, or SWIPA, was released late yesterday, a follow-up to a report from 2011, and compiles the collective knowledge gained from many types of studies in recent years. It was produced by more than 90 scientists and peer-reviewed by 28 researchers.

The Arctic is changing so fast the report is practically out of date by the time it is released, Meier said.

Scientists who study the region are alarmed by some of the data already recorded. Temperatures are rising twice as fast in the Arctic, according to the report. The region saw its warmest period in recorded history between 2011 to 2015. The periods of extreme cold in the Arctic are decreasing while the warm extremes increase.

The report finds that the transformation in the Arctic is hitting some regions much harder than others. In particular, the Pacific Coast, which includes Alaska, is undergoing some of the extreme changes, said Ross Brown, a cryosphere scientist at Environment and Climate Change Canada, which is run by the Canadian government. In Alaska and other parts of the Arctic where the temperatures are slightly higher, a more profound disruption is occurring as precipitation increasingly falls in the form of rain instead of snow as the ground warms.

Still, Brown said there is some reason for optimism. He said the report also points to a growing body of evidence that shows more aggressive intervention can slow the warming of the region. The report shows that, even with global efforts to limit carbon emissions such as the Paris climate accords, the rate of change can be slowed or even paused. Some parts of the Arctic, such as sea ice cover, could recover quickly if steps were taken to reduce emissions, he said.

"There is a choice there to be made, and if we can actually follow through, there is a chance we’ll be able to stabilize the changes that are happening," he said. "I don’t know if it’s optimism, but I think it shows that if we do take action, there is a real concrete result to it."