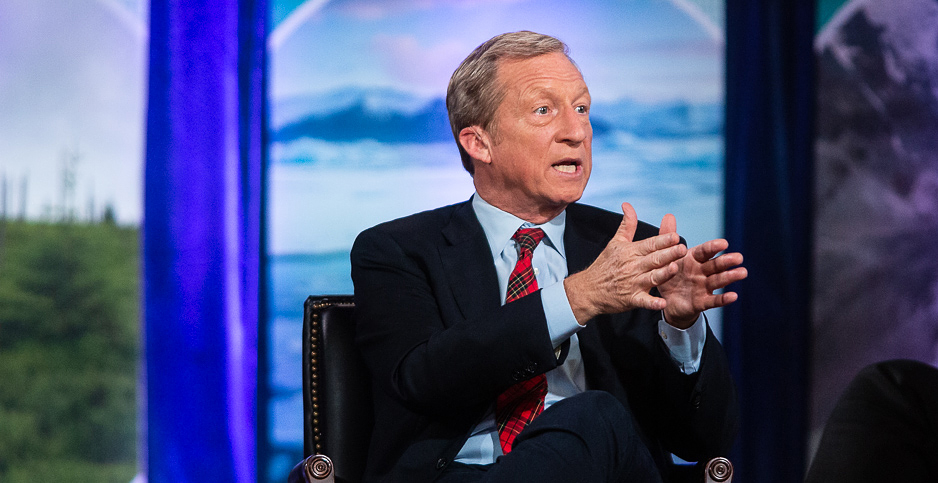 Tom Steyer has spent the better part of the last decade spending millions of dollars supporting Democratic candidates who push for aggressive climate change policies, working to get liberal youth voters to the polls and trying to get President Trump impeached, among other efforts.

The billionaire former hedge fund manager and founder of NextGen America was one of President Biden’s main surrogates on climate change matters during the 2020 presidential campaign — after running for the job himself, winning no primary delegates and dropping out early on in the primary process.

Steyer spoke with E&E News this week about how he’s still cheering on Biden and what the future holds, including this year’s U.N. Framework Convention on Climate Change scheduled for November in Glasgow, the nascent infrastructure bill discussions in Congress and upcoming elections.

How has Biden done so far on climate and energy policy?

So far, his presidency is a rousing success. If you look at the people he’s hired, he’s done a really good job of building a team. I think everybody acknowledges that. And if you look at what he’s accomplished so far, he just passed this huge COVID relief bill that 70% of Americans approve of.

It’s early. There’s an awful lot ahead of us, obviously. As a climate person, clearly, we need the green infrastructure plan. Which so far he’s been doing what he promised he would do, and he’s been succeeding in doing it, and I think Americans are, correctly, very supportive of what he’s standing for.

What do you say to opponents who say some of Biden’s actions, like canceling the Keystone XL pipeline’s cross-border permit, are killing jobs?

I think about it as an investor. The Keystone pipeline is a terrible investment. But also, people tend to try and position it as if, either we build the Keystone pipeline or we do nothing. That’s not true. We have to rebuild the United States of America in a clean way, and that’s trillions of dollars.

If anyone is worried about jobs, the clean infrastructure bill is huge. Millions of jobs, union jobs, all across the country. But I think the huge thing people are missing, we’re talking about trillions of investment dollars from the private sector pouring in to a new America.

This is our chance. This is the inflection point right now. As a government, as a people and as a business community, this is the moment where we really go and — if you’ll excuse the expression — put the pedal to the medal.

What are you looking forward to in Biden’s presidency?

We have a critical international moment in the first two weeks of November, the Glasgow U.N. conference, that’s going to determine how the world is going to address the climate crisis. And America has to have credibility in those negotiations. And if we haven’t done anything in the United States of America, how do we go to the rest of the world and ask them to deal with climate, if we’re unwilling to? It can’t happen.

What is really going to determine how Glasgow turns out is, how do we relate to the other big greenhouse gas emitters, specifically China? To a large extent, our domestic policy is like an ante in a poker game, that gets us into the game.

Virginia will have gubernatorial and legislative elections this year, and congressional midterm elections are coming up in 2022. How will you and NextGen America be involved?

We have not come out publicly with what we’re going to do in Virginia yet. … We’ve been doing a full strategic review. Virginia is one of the states we’ve worked in for the last eight years, and which we’re proud of, both in terms of what we’ve done and how it’s turned out.

2022’s going to be completely different. I don’t think there’s any doubt. Democrats have both houses of Congress and the presidency. It’s going to be really different from 2020 and 2018, or 2016. It’s a different world from what we’ve been living in.

Historically, the president’s party loses seats in the first midterm after his election. How does that work into your plans?

What are you doing now that the 2020 election has passed?

I’m very, very focused on what the private sector can do to lead on this and to really push forward the whole idea of sustainability, not just in climate, but more broadly.

I’m working on a series of things that I think are reasonably far along. But it is something still in the works. It’s not going to be informal. It’s going to be specific, and fit together, to push on the things that I’ve been pushing on for the last 10, 15 years, which includes climate, but also environmental justice and economic justice.

In the private sector, we need a different way to think about private-sector investing. So I’m very, very interested, because there’s going to be trillions of dollars of investment going into a sustainable economy for the planet.