Tom Steyer to run for president 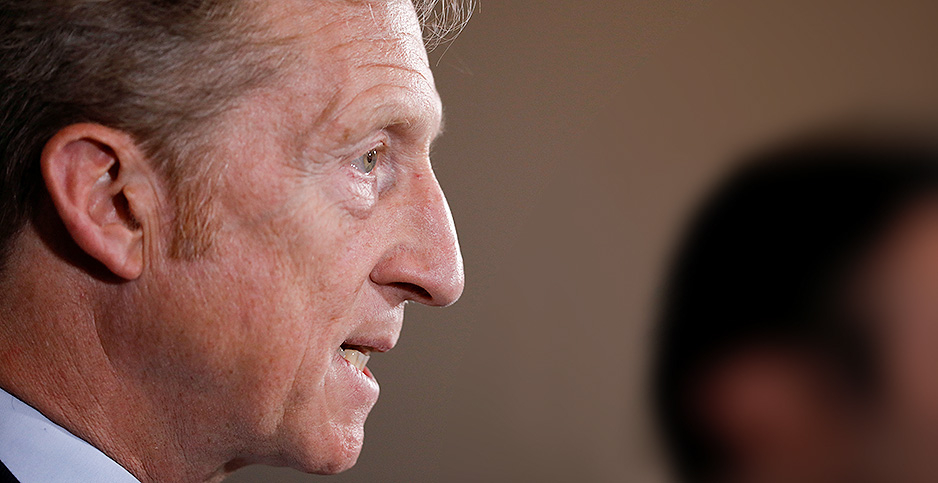 Billionaire activist Tom Steyer speaks at news conference in Iowa earlier this year, when he said he would not run for president. He has since changed his mind. Matthew Putney/Reuters/Newscom

Billionaire liberal and climate activist Tom Steyer plans to jump into the crowded field of Democrats running for president in next year’s election.

Steyer, 62, told staff from the organizations he founded, NextGen America and Need to Impeach, about his plans this weekend and has also been telling allies, two sources familiar with the announcement told E&E News today. They both spoke on the condition of anonymity to comment candidly.

Entering the race, as the 26th Democrat hoping to win the 2020 primary and take on President Trump in the general election, would be a reversal for Steyer. After being rumored to consider numerous campaigns in recent years, including for California governor and for U.S. Senate, he initially said in January he would not run for president.

The main attribute Steyer would bring to the race could be his money. He has been one of the largest spenders for Democrats in recent elections and has no shortage of cash. He has a net worth of more than $1.5 billion, according to Forbes.

He has also amassed a database of about 8 million people from his Need To Impeach project and has engaged extensively with college students through NextGen registration drives, both of which would be immensely valuable for a presidential run, according to a person familiar with the operations.

But the field is crowded, including clear front-runner and former Vice President Joe Biden, and other top-tier candidates like Sens. Bernie Sanders (I-Vt.), Elizabeth Warren of Massachusetts and Kamala Harris of California, and South Bend, Ind., Mayor Pete Buttigieg. Steyer’s home is in the San Francisco region, which is also prime Harris country, so there could be some overlap with donors and enthusiasts.

If Steyer chooses to prioritize climate change in his run, he could face an uphill battle. The race already has a climate-centered candidate in Washington Gov. Jay Inslee, while many other candidates, including Biden, Warren, Buttigieg, Sen. Michael Bennet of Colorado, and former Reps. John Delaney of Maryland and Beto O’Rourke of Texas have comprehensive climate platforms, some of which are very aggressive.

The self-made billionaire and former hedge fund manager first came into politics and campaign spending in a big way in 2013 with the launch of NextGen Climate, a political offshoot of Next Generation, a nonprofit he co-founded.

The group spent millions of dollars — almost entirely from Steyer’s wallet — to try to get climate-focused candidates elected to various offices, with mixed results.

He rebranded the group in 2016 to be NextGen America and expanded its focus to numerous progressive causes, with a focus on youth, voter registration and get-out-the-vote efforts.

Steyer then launched Need to Impeach in 2017, to push the public and Congress to carry out the impeachment process against Trump.

Steyer told E&E News earlier this year that the Democratic candidates must have an aggressive climate platform.

"One of the things that’s true is that we are not going to support anybody for president who’s not a climate hawk. I’m not going to," he said in a March interview (E&E Daily, March 27).

"It’s inconceivable to me for us to be supporting someone who is not a climate hawk," he said.

Kate Gordon, who worked for Steyer at Next Generation, said climate is likely to be a chief focus of his presidential campaign.

"Tom doesn’t ever make decisions lightly, and when he plays, he plays to win," said Gordon, who is now director of California Gov. Gavin Newsom’s (D) Office of Planning and Research.

"I know that if he enters the race he’ll make sure that two major crises of our time — climate change and inequality — are front and center of his campaign," she said.

One Steyer ally said in addition to climate, he would likely have "a strong economic message," focused on the idea that the economy lately has benefited only high-income earners, while lower classes haven’t seen wage increases.

"The economy’s not that good despite low unemployment," the person said in summarizing the economic pitch.