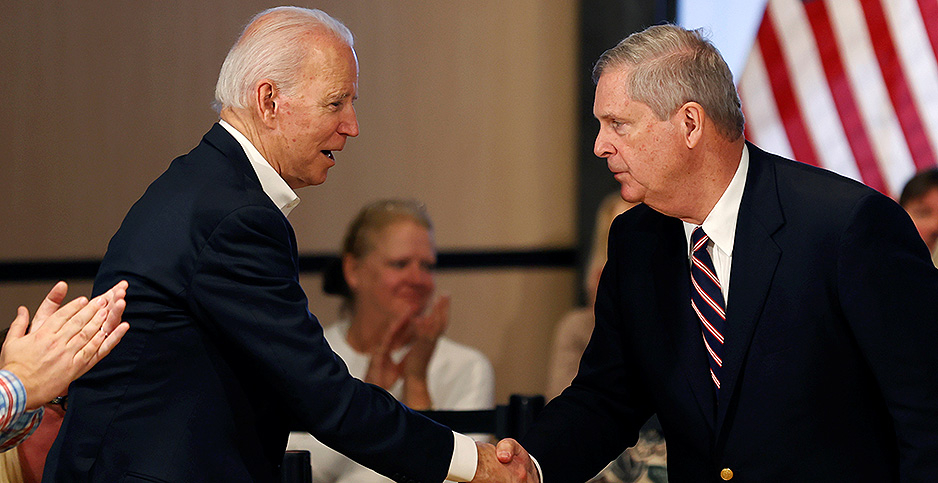 President-elect Joe Biden (left) plans to nominate Tom Vilsack (right) as secretary of Agriculture. Vilsack served in the same position for eight years under President Obama. The pair are pictured here at a campaign event in Newton, Iowa, on Jan. 30. Mike Segar/Reuters/Newscom

President-elect Joe Biden’s pick of Tom Vilsack for a second stint as Agriculture secretary gives the former USDA chief a possible chance to pick up where he left off four years ago.

Vilsack, who turns 70 on Sunday, served as Agriculture secretary for all eight years of the Obama administration, and he’s been a top Biden adviser on agriculture issues. He’s a safe political choice who, despite criticism from some groups on the left, can be confirmed quickly and slide easily into the job, say people who know him or worked with USDA during his tenure.

"Biden trusts Tom," said former Agriculture Secretary Dan Glickman, a friend of Vilsack who served in the Clinton administration, as news reports revealed the choice last night. "My guess is he didn’t want a revolutionary in that position."

Vilsack can still be expected to turn USDA in a different direction, giving more visibility to human-caused climate change and the conservation programs helpful in combating it. He was a big supporter of the Conservation Stewardship Program, which encourages practices across entire farms and was targeted for elimination by the Trump administration, said Ferd Hoefner, strategic policy adviser for the National Sustainable Agriculture Coalition.

Vilsack’s expected nomination brings support from major farm groups, which grew to know him during his time at USDA. Barring surprises, confirmation in the Republican-led Senate shouldn’t be complicated; Iowa’s senior senator, Republican Chuck Grassley, told reporters yesterday he’d support Vilsack and would be happy to introduce him at a confirmation hearing.

Vilsack, a former Iowa governor, is a father of two. His wife, Christie Vilsack, ran an unsuccessful campaign to unseat Rep. Steve King (R-Iowa) in 2012. At Vilsack’s confirmation hearing in January 2009, Grassley called them a "great political team."

The National Farmers Union last night praised the choice and said Vilsack, if confirmed, will face the imminent threat of climate change and other challenges. He should boost nutrition programs and help farmers by fighting anti-competitive practices and finding ways to balance supply and demand in farm products, the group said.

"After eight years leading USDA, Tom Vilsack has the necessary qualifications and experience to steer the agency through these turbulent times," said NFU President Rob Larew in a news release.

The American Soybean Association in a statement said that Vilsack led USDA effectively and that it welcomed the apparent choice of someone from a large soybean-producing state.

But Vilsack isn’t popular with groups critical of corporate agriculture.

"Obviously, anything is better than the insane policies Sonny Perdue has pushed out," said Brett Hartl, government affairs director at the Center for Biological Diversity, referring to the current secretary. But under Vilsack, pushing against oil, gas and timber development on national forests, for instance, was an uphill climb, he told E&E News today.

"It was like pulling teeth to get them away from old-growth logging," Hartl told E&E News.

The conversation, at least, at USDA would likely change under Vilsack, especially on climate change. Perdue has shown some acceptance of carbon markets, for instance, but hasn’t publicly embraced climate change as a trend caused or solvable by people.

Vilsack highlighted climate change during his tenure and touched on the subject during his 2009 confirmation hearing, listing it with volatile markets and rural population loss as among the most important issues he’d confront. Researchers say agriculture accounts for around 10% of greenhouse gas emissions in the U.S. and can play a big role in carbon sequestration.

And despite later criticism from organic agriculture advocates — a prominent voice on climate change and farming — he applauded the growing organic market in an exchange with Sen. Patrick Leahy (D-Vt.).

"We need to recognize that, we need to support it and we need to celebrate it," Vilsack said told senators at the time, according to a transcript.

He also touted conservation as an economic boost in farm country, telling lawmakers, "A lot of people sometimes forget that when you involve yourself in these conservation programs, somebody ultimately has to move the dirt or do work on the farm. That is rural contracting opportunities."

Vilsack was also a staunch defender of the Forest Service’s work on wildfire, once threatening to stop budget transfers for wildfire suppression — called fire borrowing — if Congress didn’t set up a separate disaster fund for that purpose (E&E News PM, Dec. 18, 2015).

Congress finally met that goal, but not until President Trump was in office.

After serving in the Obama administration, Vilsack joined the U.S. Dairy Export Council as president and CEO. The group is composed of major dairy processors and farmer-owned bargaining cooperatives.

Vilsack only recently emerged as a likely candidate.

Black members of Congress and some groups on the political left were lobbying for Rep. Marcia Fudge (D-Ohio), and former Sen. Heidi Heitkamp (D-N.D.) was also a rumored possibility. When news broke that Fudge was the choice for housing secretary instead, attention quickly turned to Vilsack.

The two agencies’ missions overlap, to a degree. USDA backs loans to rural communities for multiunit housing as well as public water and sewer systems, and it covers the cost of free lunches for low-income students in public schools, many of whom live in homes with assistance from HUD.

USDA is a department "that’s kind of unwieldy," Glickman said.

If confirmed, Vilsack will return to an agency that’s been rearranged and, in some cases, relocated to offices far from the nation’s capital.

Perdue — whom Vilsack endorsed for the post in 2017 — has reorganized upper management and moved two research agencies to Kansas City, Mo., irking Democrats in Congress.

A former USDA undersecretary during Vilsack’s tenure, Robert Bonnie, recently co-wrote a report for the Climate 21 Project suggesting the next secretary reexamine that move and quicky refill many positions that remain vacant at the agencies, the National Institute of Food and Agriculture and the Economic Research Service.

Where Glickman sees a non-revolutionary, Hartl at the Center for Biological Diversity sees a potential lack of vision and a continuation of old policy fights.