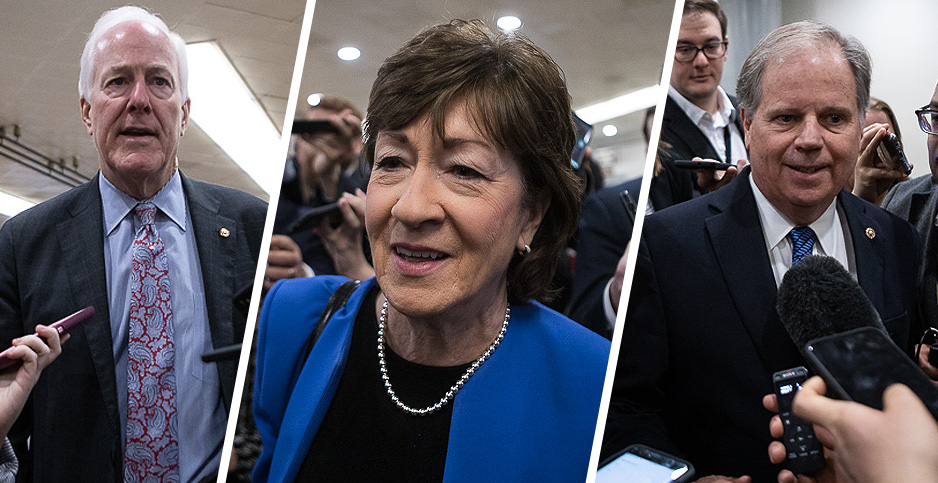 Voters in Texas, Maine and Alabama go to the polls tomorrow in key races that could determine who controls the Senate come January.

The Texas primary runoff tomorrow will decide which Democrat takes on Republican Sen. John Cornyn in November. Cornyn, a onetime member of the Senate leadership, has long been popular with the energy industry.

Also tomorrow, several House runoffs in the Lone Star State could test the popularity of the Green New Deal, as well as President Trump’s clout.

Maine Democrats have long had Sen. Susan Collins in their sights and believe this is the year they could finally take out the last remaining Republican in New England. The Democratic Senate primary will set the stage for one of the biggest races in the fall.

And Republican Jeff Sessions, who resigned from his safe Alabama Senate seat in 2017 to serve as Trump’s attorney general, is vying for the chance to face off against Sen. Doug Jones, considered by many to be the most vulnerable of the Senate Democratic incumbents.

The race to take on Cornyn

Lone Star voters are headed back to the polls in key races where candidates failed to gain 50% of the vote in the March primaries. Early voting has been underway since June 29, an extended period due to the coronavirus pandemic.

Hegar, who is being backed by the Democratic Senatorial Campaign Committee, led in the primary, but a multiple-candidate field kept her from securing a majority.

The candidates offer a contrast in style. West is touting his experience and is seen as more aligned with progressives, while Hegar is highlighting her national security credentials and moderate views that she believes can attract independent and GOP votes in November.

In a recent debate, the candidates broke over whether they would support a federal ban on hydraulic fracturing. West said he would favor a pause and might even support a permanent ban if fracking is found to harm water supplies. Hegar said she would oppose it and warned that prohibiting fracking would hurt Texas’ energy-dependent economy.

Cal Jillson, a political science professor at Southern Methodist University in Dallas, said Hegar has the edge in the runoff, given her national security background, although West has picked up some late momentum amid the Black Lives Matter movement.

Still, he predicted West would likely fall short as similar progressives have in competitive Senate Democratic primaries in Colorado and Kentucky in recent weeks.

Like other political handicappers, Jillson sees Cornyn as favored this fall and not as galvanizing as Sen. Ted Cruz (R-Texas), who only narrowly won reelection in 2018.

"People don’t hate Cornyn or love him in the way they did Cruz; the opinion on him is more moderate and less deeply held," Jillson added.

He is the top recipient of cash this cycle in either the House or Senate from the oil and gas industry — which has given him $624,758, according to the nonpartisan Center for Responsive Politics.

Democrats and Republicans will pick candidates this week for several House races this fall, in the traditionally red state, where Democrats believe they can make gains.

Progressive attorney Mike Siegel is hoping to get a rematch this fall against Rep. Michael McCaul (R), to whom he lost by 5 percentage points in 2018, in the 10th District, which stretches from Austin to the Houston suburbs. He’s facing physician Pritesh Gandhi, a political newcomer who has touted his work at a low-income clinic treating COVID-19 patients.

Siegel is a favorite of progressives and has made the Green New Deal central to his campaign, while Gandhi favors reviving Obama-era environmental policies and reentering the Paris Agreement.

Democratic operatives privately believe Gandhi may be the more electable candidate this fall, although the Democratic Congressional Campaign Committee has not taken a stance in the race.

Bob Salera, deputy communications director for the National Republican Congressional Committee, said any Democrat running on the Green New Deal this fall in Texas should expect sharp GOP attacks. "Anything anti-energy does not go over well in Texas," he added.

In North Texas’ 24th District, former Air Force Col. Kim Olson is squaring off against local school board member Candace Valenzuela for the chance to take on Republican Beth Van Duyne in a competitive open-seat race. Both favor climate action, although Valenzuela is seen as more progressive despite not formally backing the Green New Deal.

Operatives believe Valenzuela, a Black and Latina woman with a reputation for activism, might appeal to Democratic primary voters eager to back a person of color amid a national reckoning on race.

Olson has been criticized for recently suggesting that looting amid racial protests was not a big deal, a comment she was forced to walk back.

In the 10th District, a very conservative district in the Panhandle, the endorsement of Trump could be decisive in the runoff for an open seat.

The president supports Ronny Jackson, a former White House physician with no prior elective experience who is running on his close tie to Trump in a district where the president’s approval rating is over 90% among district GOP primary voters.

"This will be a true test of Trump’s endorsement. That’s about all Ronny has going for him," said Matt Mackowiak, a GOP consultant, who said there are few signs of Trump doing anything for Jackson’s campaign beyond tweeting out his support.

In the 17th District, Pete Sessions (R), who lost his seat in 2018, is trying for a comeback in a Waco-based district that is farther west than his former Dallas district.

He’ll face Renee Swann, a local businesswoman who is backed by retiring Rep. Bill Flores (R), for a seat that is expected to stay under GOP control.

Political observers predict a tight runoff. Both Sessions and Swann are conservatives, and the race will come down to whether voters favor Sessions’ seniority and experience or Swann, a political newcomer who has tried to paint her opponent as a career politician from outside the district.

Along the Rio Grande Valley, in the 23rd District, Cruz, the state’s junior senator, is wading into the GOP runoff. He recently endorsed former Air Force Lt. Col. Raul Reyes over former Navy Master Chief Tony Gonzales, who is backed by retiring Rep. Will Hurd and top House Republicans.

Cruz, who has a record of opposing establishment picks, has made a six-figure ad buy in support of Reyes via his political action committee.

Whoever wins is seen as facing a highly competitive race in November against Democratic nominee Gina Ortiz Jones, who lost to Hurd by fewer than 1,000 votes last cycle in the border district, where Trump’s immigration policies are unpopular.

In the 24th District, the GOP runoff for a Houston-area seat has become negative, with the winner set to take on Democratic nominee Sri Preston Kulkarni. Retiring Rep. Pete Olson (R) narrowly defeated Kulkarni in 2018.

The district is heavily dependent on the oil industry and has been hit hard by extreme weather in recent years.

Fort Bend County Sheriff Troy Nehls is running as a law-and-order candidate and remains favored against conservative Kathleen Wall, a self-funding candidate who lost a GOP House primary in 2018 in a neighboring district.

Wall, however, has gained notice by running ads claiming Nehls has ignored sex trafficking in the county, a charge that he has denied and said is a desperate move by a trailing opponent.

The Democratic runoff for the central Texas 31st District seat may be a referendum on the multibillion-dollar federal loan effort known as the Paycheck Protection Program.

Christine Eady Mann, a physician who was the leading vote-getter in the primary, has come under fire for having her campaign take out a $28,600 Paycheck Protection Program loan earlier this year, which it has since paid back.

Republicans have seized on the loan to call for an audit of the loan program, and those concerns could provide an opening for the other Democrat in the runoff — Donna Imam, a computer engineer and political newcomer. The Democratic nominee is seen as facing an uphill race against Rep. John Carter (R).

Collins — who has no primary opponent — has long stuck to moderate positions in major areas such as health care and the environment and bucked the GOP.

But votes in recent years, including to confirm Supreme Court Justice Brett Kavanaugh, angered Democrats and factor into what is likely to be Collins’ fiercest competition since she was first elected to the Senate in 1996.

Maine House Speaker Sara Gideon is considered the front-runner for the Democratic nomination and has the backing of the Democratic establishment and some environmental groups such as the League of Conservation Voters Action Fund. She faces two progressive opponents: activist Betsy Sweet and attorney Bre Kidman.

In the other competitive Maine race, Republicans in the 2nd District, which covers all but the southern coastal area of the state, will vote for their candidate to run against Rep. Jared Golden (D).

He flipped the seat from GOP control in 2018 and has been moderate on some issues, including voting against one of the two articles of impeachment against Trump. The Republican candidates are Adrienne Bennett, a former spokesperson for Republican Gov. Paul LePage; state Sen. Eric Brakey; and former state lawmaker Dale Crafts.

Tomorrow will also mark the runoff in the Republican primary for Alabama’s Senate race, in which Jeff Sessions and former Auburn University football coach Tommy Tuberville are competing after neither received the requisite 50% in the initial March 3 primary.

The winner will run against Jones, who is widely considered the most at-risk Democrat in this year’s Senate races. He is expected to lose in the Republican-heavy state.

The Alabama race has become increasingly heated, with harsh attacks being lobbed by both Sessions and Tuberville as they compete to show who would be the best ally to Trump.

Trump has endorsed Tuberville and slammed Sessions for not doing more to stop investigations into Russian meddling in the 2016 election in favor of Trump. Nonetheless, Sessions has argued Tuberville would not serve the state well.

Tuberville finished the March primary with a slight lead over Sessions, 33.4% to 31.6%.

Later this week, Republicans in Virginia’s 7th District will meet for a convention of party officials to pick their candidate to run against Rep. Abigail Spanberger. Spanberger unseated then-Rep. Dave Brat (R) in 2018.

In the presidential race, Trump and Democrat Joe Biden easily won their respective parties’ primaries in Louisiana on Saturday.