Top aide to Pruitt is leaving 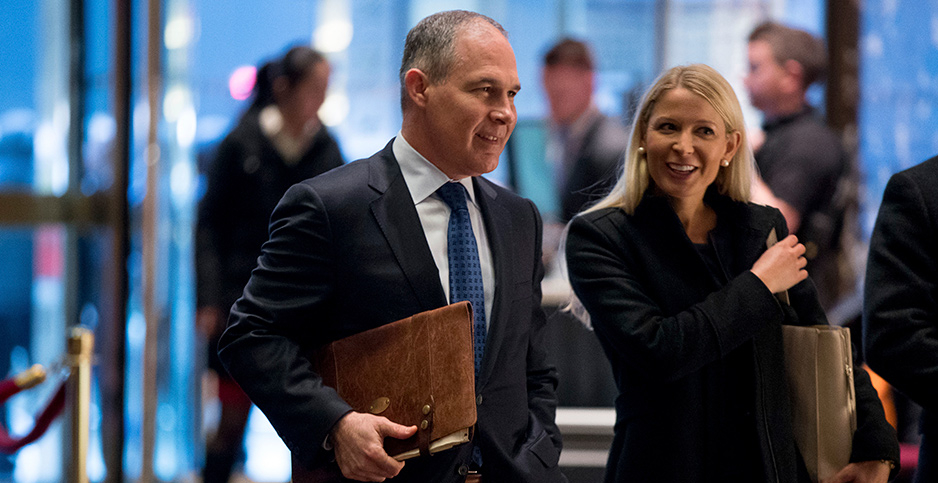 A top aide to embattled U.S. EPA chief Scott Pruitt is stepping down.

Samantha Dravis — Pruitt’s policy chief and one of the most influential players at the agency — is planning to leave EPA this month to pursue a job in the private sector, according to an administration official.

Her departure comes as Pruitt continues to face scrutiny over ethical issues, including his pricey travel, rental of a condo from the wife of an energy lobbyist and big raises for some of his top aides.

Dravis had planned to leave EPA prior to the recent spate of bad press surrounding her boss, said the administration official. An EPA spokesman didn’t immediately respond to a request for comment.

Dravis was among Pruitt’s first staff hires last year. In EPA’s policy shop, she’s led a major deregulatory push. She has traveled regularly with the administrator and frequently sits in on his meetings with CEOs, politicians and foreign leaders, according to Pruitt’s public calendars.

"Her leadership role across various policy platforms has been very, very instrumental," Pruitt said of Dravis in an interview last year. "My leadership style — and it’s been that way for many years — I’ll have many people around the table who have differing views and will present and advance their perspective, and I’ll inquire, and it’s a very in-depth and inquisitive process, and Samantha more than holds her own in that process."

They met when Pruitt was Oklahoma’s Republican attorney general and Dravis was president of the Rule of Law Defense Fund, a nonprofit policy arm for the Republican Attorneys General Association.

She helped shepherd Pruitt through the Trump administration’s vetting process — including trips to Trump Tower — and the grueling Senate confirmation process, when she took part in the "murder boards" aimed at preparing Pruitt for lawmakers’ confrontational questions. At EPA, she’s widely viewed as a loyal confidant to Pruitt, who was a newcomer to Washington and EPA when he took the helm of the agency last year.

"She is obviously one of Pruitt’s most trusted people in the entire agency," said an EPA career official.

She’s a graduate of the University of Kansas and the University of Notre Dame Law School. She was associate director of political affairs at the White House during the George W. Bush administration, an aide to Rep. Dan Lungren (R-Calif.), and a litigation associate at the law firm Taft Stettinius & Hollister in Indianapolis, Ind. She worked on Mitt Romney’s 2012 presidential campaign. Dravis was also legal counsel at Freedom Partners.

Last March, Pruitt named Dravis EPA’s regulatory reform officer, a role mandated by President Trump in a February 2017 executive order. She has also led EPA’s Smart Sectors initiative, an effort the agency says is needed to get better input from the industries it regulates (Climatewire, Oct. 4, 2017).