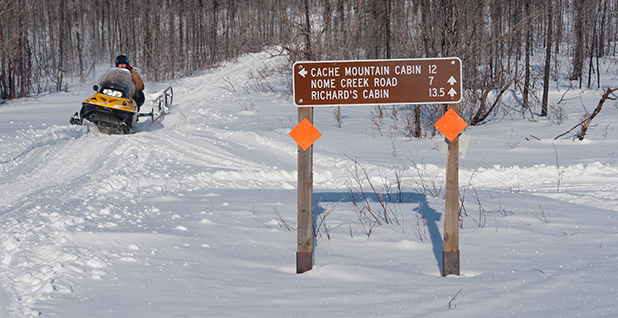 Chad Padgett, who for the past decade has served as Young’s state director in Anchorage, has been appointed to lead the BLM post, despite not having any experience at the agency. Before leading state operations for Young, Padgett worked for the Department of Agriculture serving as USDA’s state director for rural development in Alaska from October 2006 until joining Young’s staff in January 2009, according to Padgett’s LinkedIn page. He also served as Alaska state executive director of USDA’s Farm Service Agency. Padgett also served as Young’s deputy district director, overseeing five of the congressman’s district offices in Alaska and "working closely with many Federal agencies, including the BLM," according to a bureau press release.

Conservation groups blasted the decision. Others, including the head of a BLM retirees organization, questioned the wisdom of naming what some are calling a "political appointee" to oversee a state office at the center of several contentious public lands issues.

Ed Shepard, president of the Public Lands Foundation, a BLM retirees organization, said the lack of bureau experience could be an issue for Padgett. "The PLF’s position is that leadership positions should be career professionals, preferably with a background in resources and land management," said Shepard, who retired from BLM in 2012 after a 38-year career.

Padgett "will have a learning curve to know BLM. From my experience working with leaders from outside the resource agencies, those that succeed reach out to the employees and use their experience and expertise to guide their decisions," Shepard said.

But Shepard, who does not know Padgett, also noted that his experience working in Young’s office and USDA should be a plus since, at the very least, Padgett will be familiar with the major public lands issues in Alaska.

A source with knowledge of the hire said Padgett is the handpicked choice of Joe Balash, Interior’s assistant secretary for land and minerals management. Balash, who once served as Alaska natural resources commissioner and as chief of staff for Alaska Sen. Dan Sullivan (R), "endorsed" Padgett’s "skills" in "government" on Padgett’s LinkedIn page.

As director of the Alaska office, Padgett will have to deal with not only the day-to-day management of the 72 million acres of surface lands in the state, but also 220 million acres of subsurface mineral estate — by far the most of any BLM state office.

He will be thrust into a number of contentious issues. Among them is the 22-million-acre National Petroleum Reserve-Alaska, where BLM is redoing an integrated activity plan developed by the Obama administration that currently forbids oil and gas leasing in nearly half the reserve (Energywire, Feb. 1).

And the Trump administration has proposed drilling for oil along the coastal plain of the Arctic National Wildlife Refuge, which has sparked backlash from conservation groups and some Democrats (Energywire, Jan. 10). BLM has issued a draft environmental impact statement on the proposal.

Padgett will also be involved to some degree in the ongoing effort to secure an exchange of land within the Izembek National Wildlife Refuge that presumably would lead to construction of a 12-mile gravel road connecting the city of King Cove with an all-weather airport in nearby Cold Bay.

Then-Interior Secretary Ryan Zinke last year approved the land swap with the Native King Cove Corp. involving up to 500 acres within the Izembek refuge for an undisclosed number of acres of Native-held lands. The legality of the proposed exchange is the focus of a federal lawsuit that a U.S. district judge in Alaska is expected to decide in the coming weeks (Greenwire, Feb. 11).

Young has been a vocal proponent of the land swap and road through the wildlife refuge, sponsoring legislation approved by the full House in 2017 that called for exchanging more than 43,000 acres of state land for 206 acres of federal land within the refuge (Greenwire, July 20, 2017). The 206 acres would then have been used to build the gravel road. The Senate never considered a similar bill sponsored by Energy and Natural Resources Chairwoman Lisa Murkowski (R-Alaska) and fellow Alaska Sen. Dan Sullivan (R).

Young has called concerns that the road would harm wildlife and other resources in the refuge "pure b.s." (E&E Daily, April 6, 2017).

It remains to be seen what Padgett’s appointment means for the outcome of many of these controversial issues.

"Don Young has certainly championed western Arctic and Arctic Refuge development and the proposed road through Izembek wilderness, and with his state director taking over at BLM, we wouldn’t expect much course correction from the administration’s current reckless sprint to push those projects forward," said Kristen Miller, conservation director for the Alaska Wilderness League.

Brian Steed, BLM’s deputy director for policy and programs, said in a statement that Padgett, along with Nedd and Ruhs, "are exceptional leaders who will immeasurably improve our ability to effectively and efficiently manage public lands for the benefit of current and future generations of Americans."

He added, "As public land users themselves, they understand what’s at stake for the communities where the BLM operates, and how important it is for our agency to be a good neighbor."