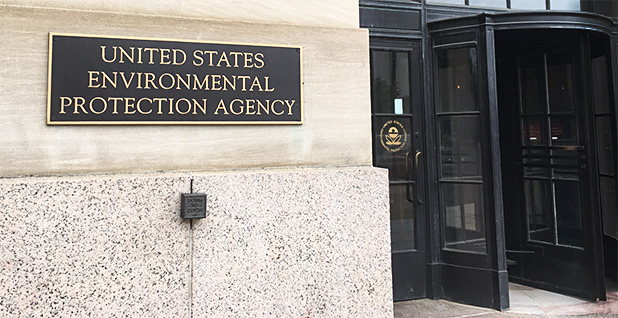 Some critics have decried the moves as politically motivated. Dravis disagreed, saying that the impending changes will boost EPA’s ability to move forward on Pruitt’s agenda and improve efficiency at the agency.

"As a cross-media and cross-agency office, I believe that the following changes to [the Office of Policy]’s organization will enhance our ability to advance Administrator Pruitt’s priorities in line with EPA’s mission to protect human health and the environment," Dravis said in the email sent to EPA staff yesterday.

Dravis is EPA’s associate administrator for policy. Before coming to the agency, she worked with Pruitt — then Oklahoma attorney general — as policy director and general counsel at the Republican Attorneys General Association. Dravis was also president of the Rule of Law Defense Fund and legal counsel at Freedom Partners Chamber of Commerce.

Karl Brooks, who was acting chief of EPA’s Office of Administration and Resources Management during the Obama administration, is keeping an eye on the agency’s coming reorganization.

"The Office of Policy is typically staffed with the administrator’s people. But what makes it so special is it is also staffed by career professionals, like economists and regulatory specialists. They are people who give unvarnished, objective advice," said Brooks, also a former EPA Region 7 administrator.

He added, "An administrator would want to use the Office of Policy to reflect his or her own priorities. That’s not too surprising. What should worry people is if the high-caliber career staff are diluted or their views are overridden by political appointees."

"EPA has, and will continue to consider and incorporate environmental justice concerns into our regulatory process and this move enhances our ability to achieve this core function," Dravis said. "Moving OEJ to OP allows [the Office of Enforcement and Compliance Assurance], where OEJ was previously located, to focus on its mission of enforcement and compliance assurance."

"Moving these offices is very alarming, especially in the immediate aftermath of Harvey and looking ahead at Irma," said Mustafa Ali with the Hip Hop Caucus and a former top EPA environmental justice official. "This is another example of how this administration is dissecting the agency with a scalpel to favor industry polluters instead of protecting the health and prosperity of the American people."

Dravis has defended the move, saying in an interview with E&E News yesterday that the reorganization was about improving EPA’s efficiency.

"I view this move as indicating that Administrator Pruitt values the Office of Environmental Justice and values that function and it’s not going to be eliminated; it’s going to continue," Dravis said (Climatewire, Sept. 6).

A career employee in the environmental justice office said in an interview that the move to the policy office makes sense. The move "should help strengthen" the ability to integrate EJ concerns across agency programs, that person said.

Regarding the administration’s proposed cuts to EJ’s budget, that employee said, "Congress hasn’t acted yet. We are preserved in some degree in what has been proposed so far, but EJ will carry on as Congress funds it."

"This is anticipating the reality that in all likelihood, Congress will preserve environmental justice activities," that person said. "Now we can plan ahead for the next few years" to really "try to align with Administrator Pruitt’s priorities."

About two dozen people work in EPA’s environmental justice office in the Washington headquarters; another 15 positions are spread out throughout the regional offices.

Dravis also said in her memo that EPA’s Office of Federal Activities will join the policy office.

"Also within OFA will be a Permitting Policy Division to build on the successful streamlining efforts in the [National Environmental Policy Act] program," Dravis said.

OFA staff who work on hazardous waste transport will move over to EPA’s Office of Land and Emergency Management, according to her memo.

The NEPA compliance office consists of about 14 people in headquarters, with another 90 in the regional offices.

The move comes as the administration tries to streamline the environmental review process for permits, said a career employee in that office.

Coordinating EPA’s permitting review activities in the policy office "makes sense," that person said. "If we’re trying to reduce the overall cycle time, we have now consolidated under one office."

"We’ve made a concerted effort across all 10 regions" to have NEPA commenters focus on the aspects or the impacts to resources that are within EPA’s jurisdiction: in other words, not comment on the Endangered Species Act, said the employee.

"EPA is working to ‘stay in our lane,’ have our comments be concise so that agencies understand the deficiencies that we’re pointing out," the employee said.

In addition, Dravis said in her email that she has established a "Sectors Team" in the policy office to work with staff across EPA.

"The Sectors Team will develop strategies that better protect human health and the environment by engaging with partners at all levels to ensure the agency puts forth sensible regulations that encourage economic growth," Dravis said.

"This team will coordinate with stakeholders to better understand their needs and challenges so as to improve environmental performance and inform smarter and more predictable rulemaking," she said.

Brooks sounded a warning about the Sectors Team, saying it could be "an effort to inject political arguments into what the agency does."

"That should be something that we watch very closely," Brooks said.

Dravis also noted in her email that she has established an Operations Office in the policy shop to help consolidate administrative functions. Further, many staff from EPA’s Office of Strategic Environmental Management will be reassigned to OFA and other offices "where additional staffing is critical to meeting OP’s core mission and the Administration’s goals," she said.

EPA’s reorganization is expected to take place Oct. 1, the start of the next fiscal year.