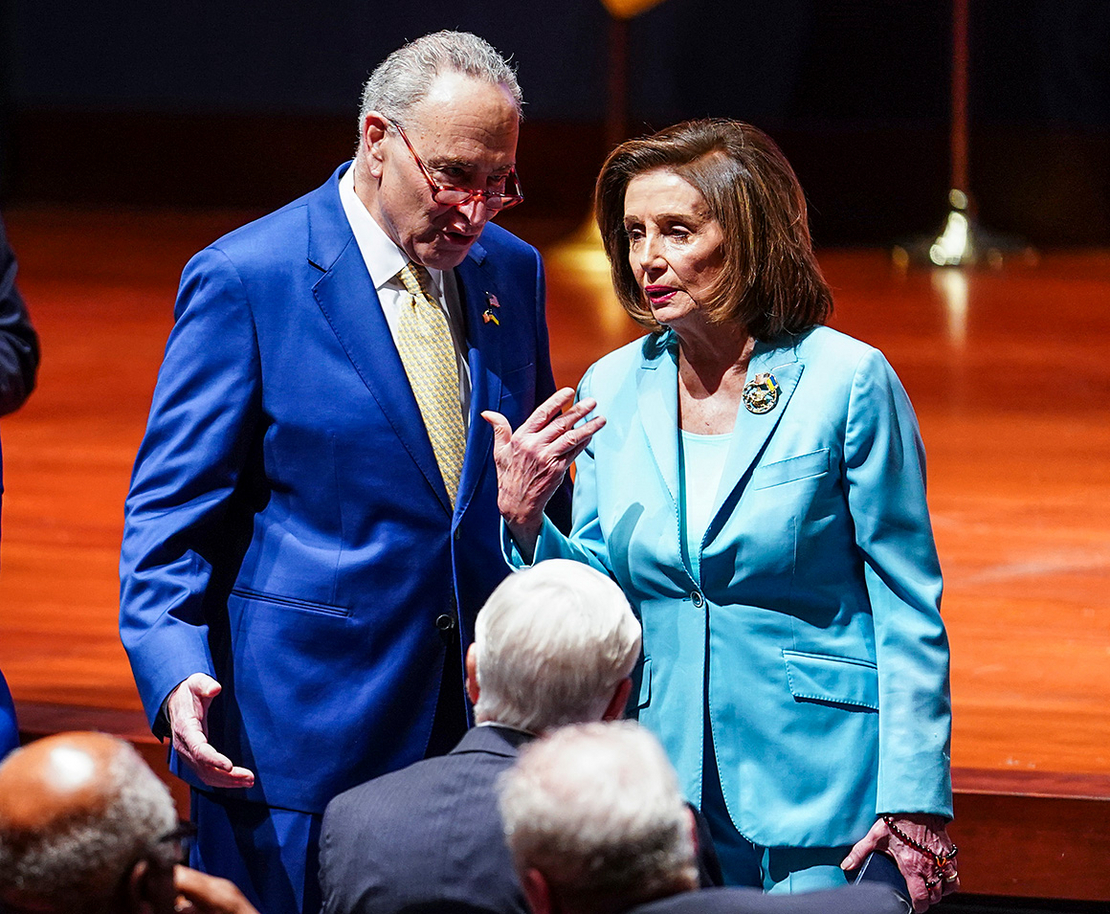 Democratic leaders said yesterday they were committed to fighting high gasoline prices as they search for a legislative solution that can earn consensus in both the House and Senate.

A legislative package could emerge in the coming weeks. Speaker Nancy Pelosi (D-Calif.) and Senate Majority Leader Chuck Schumer (D-N.Y.) huddled earlier this week to find common ground on how best to structure a response.

Rising costs and high gas prices have emerged as a flashpoint in the midterm elections. At-risk Democrats are hoping to beat back campaign attacks over energy price spikes.

“Solving this issue is a top priority for Democrats,” Schumer said yesterday. “Unfortunately, the other side seems content with bemoaning rising costs day after day, without expressing any interest in actually offering solutions to the problem.”

Schumer confirmed he met with Pelosi on Tuesday to discuss ways the two chambers could move forward with legislation to address high prices.

Schumer and Cantwell are seeking to elevate the Federal Trade Commission’s role in policing alleged price gouging in spot gasoline markets as one potential response to the current price hike.

That approach has been gaining momentum. Both Senate and House Democrats have introduced bills in recent weeks that would empower the FTC to probe for gas price manipulation (E&E News PM, April 21)

“Senate Democrats are actually working to solve the problem, and we’ll continue talks with our House colleagues on legislation that can bring gas prices down,” Schumer said. “There are several options we can take.”

Schumer has been using the high energy prices to push for confirming Alvaro Bedoya to the Federal Trade Commission. He’s said filling the post would allow the agency to probe possible industry misdeeds.

Pelosi has offered a variety of potential proposals, including actions to limit oil and gas companies from holding onto unused leases for public land development.

House Democratic Caucus Chair Hakeem Jeffries (D-N.Y.) said yesterday concerns about soaring energy costs have been among the top issues raised at the party’s caucus and leadership meetings this week.

While he said he hopes to see legislation in a “few weeks,” he conceded Democrats have not finalized their plans.

Like many Democrats, Jeffries sought to pin the blame for the high costs on energy companies that he said were “lining their pockets to the detriment” of American consumers. The No. 4 House Democrat said it would be “useful” if energy companies would act on the existing permits that they hold for drilling on federal lands to increase domestic energy supplies.

Jeffries notably did not rule out a possible short-term repeal of the federal gas tax, which stands at 18.4 cents per gallon.

A federal gas tax holiday has appeal among rank-and-file Democrats eager to show voters they are acting to curb costs ahead of elections.

However, Pelosi and other party leaders have largely ruled it out, saying there is no way to keep energy companies from keeping the savings from a tax holiday rather than passing it on to consumers.

The chairs of the Transportation committees on both sides of Capitol Hill also remain staunchly opposed to a suspension of federal gas tax, which provides crucial funding for the infrastructure bill Congress passed less than a year ago.

“That’s an abysmally stupid idea whose time has not yet come,” House Transportation and Infrastructure Chair Peter DeFazio (D-Ore.) said in an interview yesterday.

“The White House is very cognizant of my views,” he added.

DeFazio said consumers would be unlikely to see much of an impact at the pump. Much of the benefit, he argued, would go to oil companies.

“It’s a failure. The oil companies are going to buy back $22 billion of stock. Most Americans don’t own oil company stock,” he said. “They’re going to pay for enriching the stockholders, the CEOs and the execs in those companies.”

Outside of that, however, it’s not clear exactly what policies lawmakers might be able to pursue.

Democrats in both chambers have called for a windfall tax on record profits earned by the industry during the Ukraine crisis (E&E Daily, March 31).

The bills, in general, would tax profits of Big Oil companies and return them to consumers as rebates. But the idea could run into trouble with moderates and oil-patch Democrats.

DeFazio has been shopping the “Stop Gas Price Gouging Tax and Rebate Act,” H.R. 7099, his version of the windfall tax. Others are pending in the Senate.

“I’m pushing it,” DeFazio said. “But, you know, there are a lot of weak-kneed people around here.”