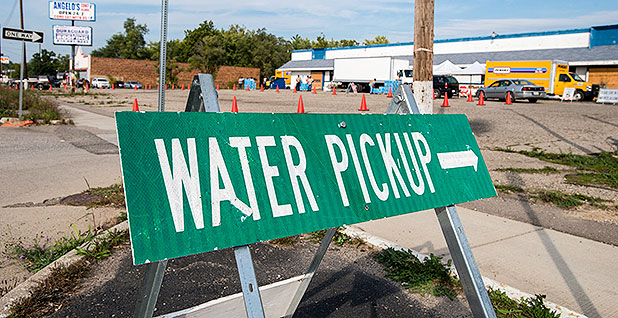 Flint, Mich., was declared a federal emergency in January, as the Senate debated the Clean Water Rule. Photo by Lance Cheung, courtesy of U.S. Department of Agriculture.

A top environmental consultant suggested that Hillary Clinton’s presidential campaign link the water crisis in Flint, Mich., to Republican opposition to the Obama administration’s hot-button Clean Water Rule, even though "the two aren’t that related," according to an email posted on the website WikiLeaks yesterday.

The email from Daniel Weiss — formerly of the Center for American Progress, the League of Conservation Voters and Waxman Strategies — was allegedly sent to Hillary Clinton campaign chairman John Podesta and policy adviser Kristina Costa on Jan. 20 and hacked from Podesta’s personal email account.

"I know that [Clinton] already addressed the [Michigan] water crisis, but there is a potential new angle that could get a lot of attention in [Michigan] since the issue is so hot," Weiss wrote. "I believe that all of the GOP candidates oppose the clean water rule (Waters of the US) promulgated by EPA last year. … What about having your [Michigan] operation/[Michigan] Dem party issue a press release or some other communication in advance of visits by the GOPers highlighting their opposition to protection for Flint and [Michigan’s] drinking water? The two aren’t that related but the rule is designed to protect drinking water for 117 million Americans, Great Lakes protection is huge there etc."

He added, "This issue can be used in the fall, too, but now is the time when it is likely to get the most attention because Flint has been declared a disaster area, etc."

President Obama declared a state of emergency in Flint on Jan. 16 but stopped short of declaring it a "disaster," which is reserved for tornadoes, floods, wildfires and other natural phenomena.

Weiss wrote the note three days after Clinton invoked the city’s water struggles in a Democratic primary debate against Sen. Bernie Sanders of Vermont. Clinton has highlighted the troubled city, where a failure to properly treat the drinking water led to widespread lead poisoning, in her speeches and visited the city in February.

"We’ve had a city in the United States of America where the population, which is poor in many ways and majority African-American, has been drinking and bathing in lead-contaminated water," said Clinton in the Jan. 17 debate. "And the governor acted as though he didn’t really care; he had requests for help that he basically stonewalled."

Clinton has also supported U.S. EPA’s efforts to craft the Clean Water Rule, also known as the Waters of the U.S. rule, or WOTUS. EPA and the Army Corps of Engineers finalized the rule last year to redefine which streams and wetlands get automatic protection under the Clean Water Act. Republicans in Congress have criticized the rule, saying it would infringe on state and private property rights.

The rule is currently on hold pending litigation in the 6th U.S. Circuit Court of Appeals.

Many of the problems that led to the lead contamination in Flint stem from lax oversight and enforcement of the 1974 Safe Drinking Water Act and the 1991 Lead and Copper Rule, which dictates how water utilities must test for and respond to traces of the powerful neurotoxin in drinking water.

To compare, WOTUS pertains to the Clean Water Act and would allow the federal agencies to require permitting or water quality standards for waterways that fall under the definition of "waters of the U.S." This could affect sources of drinking water but also waters designated for fishing, swimming and other uses.

Democrats in Congress did tie the Clean Water Act jurisdictional rule with the water crisis in Flint shortly after the city’s story hit the national stage.

"It’s unconscionable to think that we would waste valuable time in the Senate attacking a rule dealing with clean water designed to keep our nation’s water safe; and while we’re doing this waste of time here in the Senate today, Flint, Mich., is in a state of emergency," Senate Minority Leader Harry Reid (D-Nev.) said on the floor before an unsuccessful vote to override a presidential veto of S.J. Res. 22 to prevent the implementation of the rule.

"Republicans are so wedded to ideological purity, they have lost touch with reality. They have somehow failed to recognize that clean water is a basic priority for all Americans," Reid added.