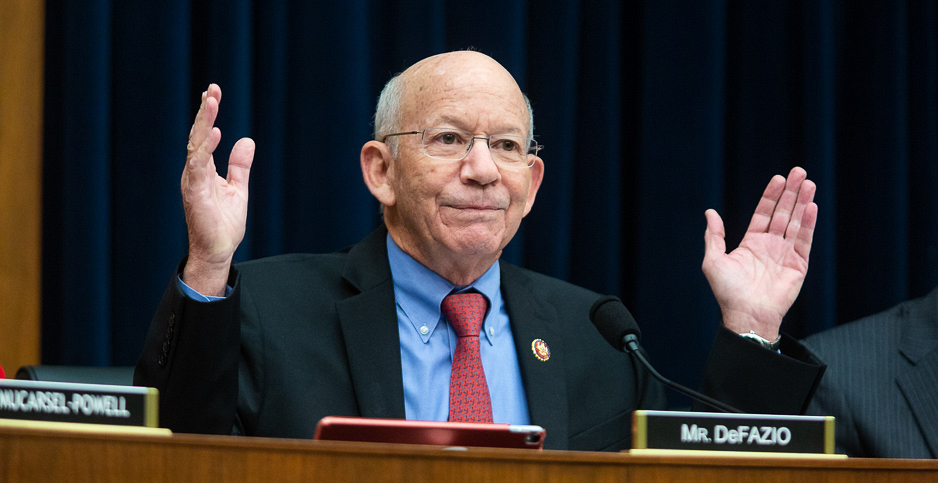 The session is one part of House Democrats’ broader push for an infrastructure package that will include clean energy legislation and see floor debate June 30. A water projects bill is also on the agenda for next month.

GOP amendments aimed at striking transit and environmental provisions from the highway bill are a "non-starter," DeFazio told E&E News in a phone interview yesterday, where he detailed other House plans on infrastructure.

"Mr. Perry, during the FAST Act, when the Republicans were in charge, attempted to decimate transit, as I recall. It’s a longtime agenda of his, and it’s a non-starter," DeFazio said, referring to the Fixing America’s Surface Transportation Act.

"It didn’t pass when Republicans were in charge; it’s certainly not gonna pass when the Democrats are in charge," he added.

The full T&I Committee is marking up H.R. 2, the "Investing in a New Vision for the Environment and Surface Transportation (INVEST) in America Act."

When T&I Democrats released the text of the bill two weeks ago, Republicans on the panel complained that they weren’t involved in crafting the measure, which they said contained "extreme" environmental provisions.

But the chairman defended his actions, saying he was left with no choice because of the GOP’s refusal to address fossil fuel use.

"They could not work with us on developing the surface bill because we have interwoven in grant programs to states and requirements to reduce fossil fuel pollution," he said. "They don’t agree with that."

DeFazio noted, however, that GOP members have been more accepting of provisions aimed at ensuring the resilience of projects to flooding, sea-level rise and other impacts of a warming planet.

Some T&I Republicans have witnessed firsthand these impacts in their districts, including ranking member Sam Graves of Missouri and Rep. Garret Graves of Louisiana.

"They do agree in the highway bill with resilience and building for those events because they’ve seen ’em," DeFazio said. "You know, Garret Graves has seen Louisiana sink into the ocean. Florida has seen the ocean rise up onto their highways. Sam Graves saw his highways flooded. They are willing to go there."

H.R. 2 would authorize $494 billion over five years for surface transportation programs, including $319 billion for the federal highway program, $105 billion for mass transit and $60 billion for rail. It contains a strong emphasis on helping states prepare for and respond to the effects of climate change.

Unlike with the surface transportation bill, DeFazio said he plans to solicit GOP input before releasing the text of the Water Resources Development Act (WRDA) reauthorization in July.

"The considerations regarding climate change in WRDA are resilience to deal with severe weather events, coastal flooding, sea-level rise," he said. "Now, Republicans will agree on all those things. They just won’t say it’s due to fossil fuel pollution."

He added: "The WRDA bill is being negotiated in a very bipartisan manner. And I expect that to be a bipartisan bill."

A review of the dozens of amendments filed yesterday to the highway bill indicates there will be significant debate today over provisions to boost electric vehicles and related infrastructure.

Rep. Julia Brownley (D-Calif.) has filed several proposals that seek to accelerate the deployment of zero-emission buses, including an amendment that would require buses purchased with federal grants for public transit to be emissions-free starting in 2029.

A second Brownley amendment would link eligibility for bus grants to areas that are designated as in nonattainment under the Clean Air Act for ozone or particulate matter. The congresswoman is also seeking to add language to prompt a National Academy of Sciences study of climate resilience in transportation systems.

Rep. Mark DeSaulnier (D-Calif.) filed an amendment that would add environmental justice concerns to the criteria for the EV charging grant program in the underlying bill.

A second DeSaulnier proposal would require the Department of Transportation to set aside zero-emission bus grant funds for states with low-emission bus mandates.

Republicans have filed several amendments to strike the EV charging provisions from the bill entirely, including one from Perry and a second from Rep. Paul Mitchell (R-Mich.).

And not all Democrats appear to be on board with the EV proposals in the overall bill.

Houston-area Rep. Lizzie Fletcher has an amendment to strike the "zero-emission" requirements for bus grants.

Fletcher has also filed a proposal to add natural gas and propane-powered vehicles to the EV charging provisions.

Kevin Miller, director of public policy at ChargePoint, said in a phone interview that the EV infrastructure company strongly supports the electrification components of the bill.

"While America has made significant progress, now is really the time to accelerate the build-out of EV charging in a manner that leverages both private funding and public-sector investment," Miller said.

"Public-private partnerships, like those that are envisioned by this bill, will significantly contribute to getting the nation back to work and accelerate economic recovery around the country, all the while reducing greenhouse gas and particulate matter emissions," he added.

"Even though improving our roads and bridges is a bipartisan issue that Democrats and Republicans can usually work on together, Democrats have put forward their own costly, heavy-handed, partisan ‘My Way or the Highway’ bill," Graves wrote.

"That’s why my Republican colleagues and I plan to introduce the STARTER Act: the Surface Transportation Advanced through Reform, Technology, & Efficient Review Act later this week," he wrote, adding that the legislation would call for streamlining the permitting process for large infrastructure projects, among other things.

The National Association of Manufacturers released a letter yesterday opposing the Democrats’ bill, including because of new "regulatory hurdles and costs."

The group said, "While manufacturers appreciate the funding levels included" in the legislation, "the House of Representatives has not shared with stakeholders or the American people the proposed funding streams for this additional revenue beyond what the Highway Trust Fund can currently support."

The "INVEST in America Act" is ultimately expected to form the central component of a broader infrastructure package, which House Majority Leader Steny Hoyer (D-Md.) has said will come to the floor as soon as June 30.

That package would be modeled after an infrastructure framework that House Democrats released in January, which would also address clean energy, broadband, wastewater and drinking water (Greenwire, Jan. 29).

The framework would provide $34.3 billion for "transformative" clean energy investments, including $20 billion for energy efficiency projects and $4 billion for updating the electric grid and boosting resilience.

The Energy and Commerce Committee, which has jurisdiction over the clean energy portion of the package, unveiled the "Leading Infrastructure for Tomorrow’s (LIFT) America Act" last spring, which would similarly make a $33 billion down payment on clean energy (E&E News PM, May 15, 2019).

At a hearing yesterday, E&C Chairman Frank Pallone (D-N.J.) said the "LIFT America Act" would form the basis of the panel’s contribution to the package, although he didn’t offer details on timing.

"The majority leader has announced that the House will vote on an infrastructure bill by the end of this month, and both the ‘LIFT America Act’ and the Moving Forward framework provide a foundation of the energy provisions that will be included in that overall package," Pallone said.

Meanwhile, the Trump administration is weighing a $1 trillion infrastructure proposal to stimulate the economy in the wake of the coronavirus pandemic, Bloomberg reported Monday.

Asked for comment, White House spokesman Judd Deere said in a statement: "Since he took office, President Trump has been serious about a bipartisan infrastructure package that rebuilds our crumbling roads and bridges, invests in future industries, and promotes permitting efficiency."