Top jobs could be filled soon as industry grows frustrated 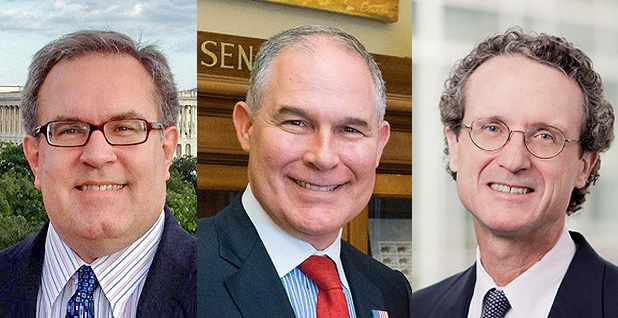 President Trump is expected to nominate a coal industry lobbyist and a former official in the George W. Bush administration for key posts at U.S. EPA.

Andrew Wheeler, a lobbyist for coal giant Murray Energy Corp. and a former staffer for Sen. Jim Inhofe (R-Okla.), is widely seen as the likely nominee to become EPA’s No. 2 under Administrator Scott Pruitt, according to multiple sources close to the administration.

George W. Bush-era EPA acting air chief Bill Wehrum, an attorney at Hunton & Williams LLP, is expected to be Trump’s nominee to lead the agency’s Office of Air and Radiation. Wehrum was the acting boss of that shop during the Bush administration after he was nominated for the position but blocked by Democrats in the Senate.

Both likely nominees have been considered for months to be top contenders for those jobs. Sources expect the White House to nominate them soon.

If confirmed, the EPA deputy administrator and the air chief will be pivotal in enacting the Trump administration’s environmental agenda. Wheeler would likely be charged with managing the agency’s personnel and could oversee efforts to slash the workforce. Wehrum would be central to rolling back Obama-era climate change regulations, including the Clean Power Plan.

Sources cautioned that those picks could change, given the unpredictability of the Trump White House. But they anticipate that Wheeler and Wehrum could be named in the coming weeks. The administration is under pressure to add political staff at EPA, where Pruitt remains the only Senate-confirmed official.

Wheeler and Wehrum declined to comment for this story. White House spokeswoman Kelly Love said there are "no announcements at this time."

Both Wheeler and Wehrum are well-known in Washington energy circles, and they could help Pruitt — a Washington, D.C., outsider — navigate the national political scene and the federal bureaucracy.

"If nominated, both of these individuals would bring huge amounts of expertise to the table in terms of being grounded in the law and the twin arts of legislating and regulating," said Stephen Brown, a lobbyist for oil refiner Tesoro Corp.

The administration is under pressure to fill key jobs at EPA.

"Industry is increasingly frustrated that these critical positions have not been filled," said one industry lobbyist. "Trump is jeopardizing his own agenda and putting industry in a position where we would hope to have some things accomplished over the next four years. But it’s looking like the accomplishments are going to be minimalized."

After several months with little movement around top environmental jobs, the Trump administration has begun to roll out picks for several other key EPA positions.

The White House this week announced the nomination of an agency veteran with industry ties to lead EPA’s Office of Chemical Safety And Pollution Prevention. And Trump’s nominee for the agency’s Office of Civil Enforcement won the approval of the Senate Environment and Public Works Committee.

Meanwhile, Pruitt has hired a cadre of political staffers to serve in offices throughout the agency.

"I think the general consensus is that Mr. Pruitt and his team are doing an admirable job of carrying out the president’s agenda," said Brown of Tesoro. "Would that be easier with more key appointees in place? Yfes, and that will happen provided Democrats cooperate once nominations are made."

Both Wheeler and Wehrum would face certain opposition from greens and Democrats, but Senate Republicans would likely be able to approve their nominations with little or no support from across the aisle.

"These are two very smart and experienced men. If their mission is — as I expect — deregulation, then industry groups should cheer, while health and environmental advocates should be very worried indeed," said Frank O’Donnell, president of environmental group Clean Air Watch.

Wheeler worked for Inhofe from 1995 to 2009, including a stint as staff director for the Senate Environment and Public Works Committee for the Oklahoma Republican. Several other former Inhofe staffers have already landed at EPA, including Pruitt’s chief of staff, Ryan Jackson.

Wheeler also worked at EPA in the early 1990s as a special assistant in the agency’s toxics office, according to his LinkedIn profile.

The Trump administration has pledged to bar appointees from working on issues that they lobbied on in the previous two years, but many top officials have been granted waivers.

White House energy official Mike Catanzaro, for example, received a waiver that allows him to work on broad energy and environmental policy issues, like the Clean Power Plan and other issues he focused on as a lobbyist. Catanzaro also worked on Inhofe’s EPW staff, joining the committee after Wheeler left in 2009.

There was speculation in recent months that Jeff Holmstead, who was EPA’s air administrator, had emerged as a leading contender to become the agency’s deputy. Some conservatives mobilized to oppose his nomination, with one person saying Holmstead would "slow-walk and gut" much of the Trump agenda (Greenwire, June 19).

Environmentalists warned that Holmstead, an industry attorney at Bracewell LLP who has been central in the legal battle against the Clean Power Plan, would be extremely effective at unraveling environmental rules (Climatewire, June 20).

Holmstead did not respond to a request for comment.

Wehrum worked as the top legal counsel for then-air chief Holmstead during the Bush administration.

When Holmstead stepped down, Wehrum served as the acting administrator of the air office from 2005 to 2007 but was never confirmed. His efforts to steer EPA’s air requirements toward a more market-friendly approach garnered praise from industry groups but drew the ire of Democrats like former Sen. Barbara Boxer of California.

Prior to EPA, Wehrum worked with Holmstead as an attorney representing several major industries out of the Washington offices of Latham & Watkins LLP.

He’s been at Hunton & Williams since 2007, where he represents industry in air pollution cases.

Wehrum’s name has been in the mix for months now, but sources say the administration could soon announce his selection (Greenwire, March 24).