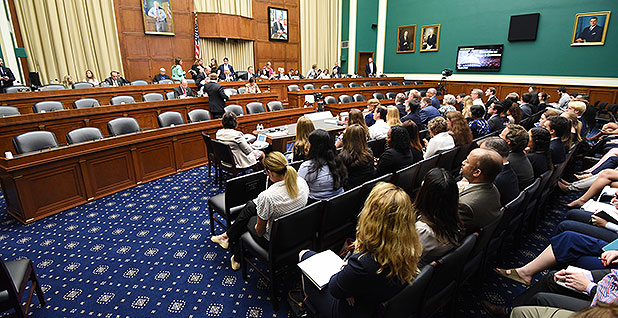 The House Energy and Commerce Committee hearing room. There is competition over who will take the gavel of the Subcommittee on Oversight and Investigations. Maryland GovPics/Flickr

A behind-the-scenes contest for the gavel of the Energy and Commerce Committee’s powerful investigative subcommittee could soon be resolved with Mississippi Republican Gregg Harper favored to claim it.

"I am talking to several people who are interested in that position and giving them the opportunity to make their case," Energy and Commerce Chairman Greg Walden (R-Ore.) said.

He declined to name the candidates for the opening or whether he would base his pick on seniority but said a decision would be made no later than the end of the year.

E&E News has confirmed four candidates for the post: Harper as well as Reps. Joe Barton of Texas, Brett Guthrie of Kentucky and Morgan Griffith of Virginia. All of the candidates, save for Harper, told E&E News over the past week they would like to lead the subcommittee.

The chairmanship of the Energy and Commerce Subcommittee on Oversight and Investigations came open last month when Rep. Tim Murphy (R-Pa.) resigned after a tawdry extramarital affair came to light.

Griffith, the panel’s vice chairman, has been serving as the acting chairman until a permanent successor is named.

Harper, a fifth-term lawmaker who represents the south-central part of Mississippi, is favored given his seniority on the panel and reputation for working with House leaders. He declined to say he was even in the running for the opening, though.

"I can just say that’s out of my hands; anything like that is certainly completely up to the committee chairman, Greg Walden. I don’t weigh in on that — it is completely his call," Harper said this week.

He is popular with party leaders as signaled by his being named to lead the House Administration Committee at the start of this Congress. Aside from Barton, he is the most senior member on Energy and Commerce who does not head a subcommittee.

A son of a petroleum engineer, Harper has been reliably conservative on the committee, pushing back against environmental regulations and supporting rural drinking water programs.

He was, however, among a handful of conservatives who earlier this year called for the White House to renegotiate the Paris climate accord rather than abandon it.

Harper, 61, is especially interested in driverless automobiles, a technology he sees as potentially life-altering for the disabled, including his own adult son.

He also has been an outspoken supporter of a controversial Agriculture Department catfish inspection program, which is seen as a benefit to catfish farmers in his state who compete against overseas importers.

Barton, 68, who led the full committee from 2004 to 2010 and now serves as vice chairman, cited his seniority in making the case to lead the panel.

He also said he would be "totally loyal" to Walden in using the subcommittee’s investigative clout to advance the full committee’s legislative agenda.

"To the extent I had a little bit of leeway, we are doing the DOE reauthorization bill so I’d probably do some hearings on that and maybe some hearings on EPA overreach, but primarily I’d use the oversight committee to coordinate the agenda of the full committee chairman," he said.

The 17-term lawmaker, a top Capitol Hill ally of the energy industry, has not always gotten along with party leaders and frustrated them earlier this year by serving as an outspoken member of the hard-right Freedom Caucus during health care talks.

He also lost a long-shot bid at the start of the Congress to regain the full committee gavel to Walden.

Environmental groups would almost certainly bristle at the ascension of Barton, who has raised doubts about climate change. He has been lampooned in the green community for using a hearing to apologize to energy giant BP PLC for its having to pay billions of dollars in cleanup costs for the Deepwater Horizon oil spill.

Griffith and Guthrie, meanwhile, are more junior subcommittee members who might have to wait until the next Congress to move up the panel’s ranks.

"A lot of oversight is getting the data, analyzing the data, and if someone is trying to sell you magic beans the committee needs to let them know we are not Jack and we don’t believe in a beanstalk that is going to take us to a golden goose," said Griffith, speaking in a folksy style he honed for years as a criminal trial attorney in rural Virginia before being elected in 2010.

A Freedom Caucus member, Griffith, 59, has been especially critical of U.S. EPA’s regulation of coal, which is still an economic driver in his southwest Old Dominion district.

He said he would push the subcommittee to hold more oversight meetings, including of federal efforts to rebuild the grid in Puerto Rico.

Walden noted Griffith is "doing a great job so I am not in a giant rush to make an appointment."

Guthrie, 53, a West Point graduate who serves as vice chairman of the Health Subcommittee, said "who wouldn’t love the job" when asked about his interest in the O&I Subcommittee. He said he would use the slot to focus more investigative work on combating the opioid crisis and lowering prescription drug costs.

Whoever gets the gavel will inherit a subcommittee that has long been a powerhouse on Capitol Hill, especially under Democratic Chairman John Dingell of Michigan, who led both the full panel and O&I simultaneously.

The legendary lawmaker for decades used it to launch investigations into failures at federal agencies and the private sector that were often a prelude to sweeping legislation by the full committee. The subcommittee itself does not have the authority to write legislation.

More recently, the subcommittee may be best-known for a high-profile probe of the failed energy company Solyndra, which received $535 million in funding through a controversial Department of Energy loan program.

The panel collected more than 300,000 pages of documents, conducted 14 interviews, held five hearings, issued three subpoenas and wrote a 147-page report in a bid to make the firm a symbol of the shortcomings of the Obama economic stimulus package.

Rep. Paul Tonko (D-N.Y.), a senior O&I Subcommittee member, said politically charged investigations, like Solyndra, are not the best use of the panel’s time but said it plays a crucial role in making sure agencies are following their legislative mandates and functioning properly.

"You want to be that watchdog," Tonko added.

The subcommittee has also used sessions in recent years to grill Volkswagen AG over an emissions-cheating scheme and blast Energy Department officials over a series of security lapses at nuclear facilities.

In the 115th Congress, the subcommittee has held 13 hearings, many of them focusing on health issues, including the opioid crisis. At a September EPA oversight hearing, Republicans bashed the agency for not doing enough to protect 13 Superfund sites in Texas during Hurricane Harvey (E&E Daily, Sept. 7).