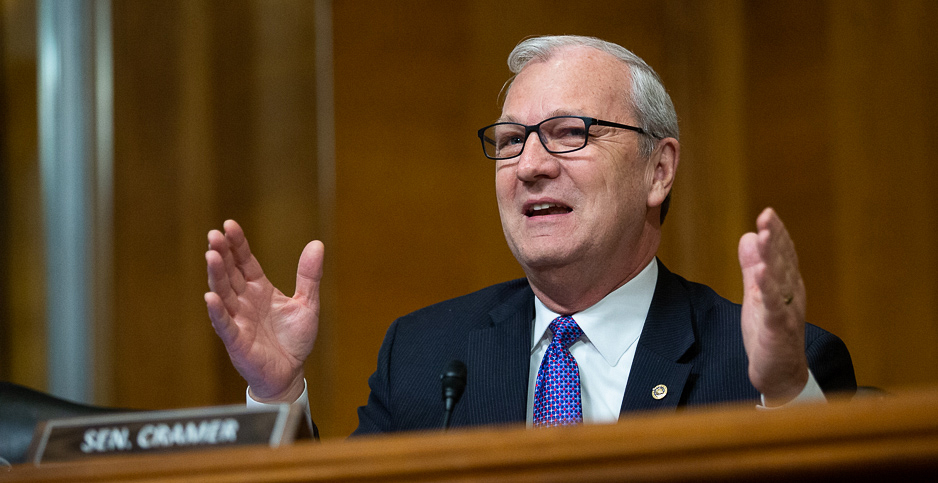 North Dakota Republican Sen. Kevin Cramer has been among the loudest congressional voices in response to the oil industry's woes. Francis Chung/E&E News

Key GOP senators are bracing for a fight over help for beleaguered U.S. oil and gas companies in COVID-19 stimulus talks, dismissing growing calls from Democrats and environmentalists to shut the door on a "Big Oil bailout."

"Oil is getting kicked in the teeth again by those that just can’t abide the fossil fuel industry, and it’s just unfortunate," Murkowski said last week by phone from her Capitol Hill home.

Major producers in Alaska have slashed exploration costs for the year, laying off workers and sending them home.

Cramer told E&E News last week that North Dakota has lost thousands of production jobs in the Bakken Shale, but the overall impact of the oil glut has been wide-ranging on the state’s economy.

"It’s not just the producers, it’s the rest of the value chain, the upstream and the downstream guys, the water trucks, the frackers, the taco stands, I mean there’s so much," he said during a phone interview from his Bismarck, N.D., home.

A first-term Republican who ran as being close to the president, Cramer said he usually talks with him about once a week over energy matters and said that after some initial reluctance to help oil companies, the president now understands the distress being felt by producers from North Dakota to Texas.

"Everything is on the table" to help hard-hit energy firms, including tariffs on foreign oil imports and filling the Strategic Petroleum Reserve, Cramer said.

While sector-specific energy aid was largely absent from the first four rounds of COVID-19 stimulus, the fight to come is already playing out in implementation of the Coronavirus Aid, Relief and Economic Security Act, the $2 trillion stimulus enacted in March that includes hundreds of billions of dollars of loans for small businesses and other "distressed sectors."

Led by liberals like Sen. Ed Markey (D-Mass.), environmentalists and Democrats are pressing to limit access to federal loans authorized under the law, while Republicans are pushing the administration to provide aid to U.S. oil and gas firms (E&E News PM, April 24).

Both Cramer and Murkowski were among the GOP senators who highlighted the fiscal challenges oil and gas companies face in a letter to Treasury Secretary Steven Mnuchin and Federal Reserve Chairman Jerome Powell last week.

In an appearance on "Fox News Sunday," Mnuchin said the administration would oppose "shareholder bailouts" for oil firms but confirmed that loans are under discussion.

There appears to be little unity over exactly what additional legislative help for the industry should look like, although the administration’s proposal to spend $3 billion to fill the SPR remains under discussion.

Murkowski said last week that she supports the proposal but warned it was not a panacea. "I don’t think it’s the only [solution], but I think it is a tool," she said.

Noting growing bottlenecks in Alaska and elsewhere, Murkowski said storage needs to be addressed in some fashion.

"What we got to figure is how do we keep companies in business, preserve their workforces and kind of almost wait through this storage situation that we’re in," she said. "So purchasing and storing it on-site in a producing field is an option."

Cramer also supports a $3 billion appropriation to fill the SPR, saying it would offer some short-term relief to producers.

But he warned that Democrats would try to use SPR aid to extend tax breaks for clean energy and said he would not support such a trade-off unless it also came with new or expanded credits for traditional energy firms.

Murkowski said Democrats’ desire to help struggling renewable sectors could provide the fodder for a modest deal helping fossil fuel and clean energy interests, such as the 2015 agreement that ended the ban on crude oil exports and extended key green tax incentives.

"I think it needs to be reasonable, but, for instance, right now with renewables, they’ve asked for safe harbor in terms of the tax credits for wind and solar," she said. "That’s something that I’m supportive of."

Cramer was less optimistic about the prospects for energy aid in future stimulus talks, saying his main focus is giving energy firms better access to emergency federal financial assistance and betting production will resume as the economy bounces back.

"There aren’t very many tricks and there’s certainly no silver bullets to this thing other than just time and a growing economy," he said.

Cramer has pressed the White House and Treasury and Energy departments to permit the Federal Reserve to give energy companies access to loan programs it has created for ailing businesses.

One option he suggested is that Treasury allow energy firms to tap into the $17 billion in stimulus aid Congress has already approved for businesses critical to national security.

"To me, probably the best thing you could do financially is just make sure that these tools that the Federal Reserve and Treasury are coming up with are available," said Cramer.

He’s warned Trump that some large commercial lenders might be biased against making federally backed loans available to fossil companies, and he did not rule out Congress making some changes to stimulus lending programs in future aid legislation to make them more accessible to energy companies.

"What’s going to happen here is we’re going to level the playing field, but it’s going to be with a tectonic shift in the landscape there," she said.

"I’m looking at this and saying, ‘No, this can’t be an either/or, we’re going to trade oil now for renewables or we’re going to trade renewables for oil,’" said Murkowski. "This is our energy sector, and the sector, broadly, is hurting right now, and I think we need to be looking fairly at how we’re able to address these impacts."

Republicans are also stepping up pressure on the Trump administration to consider aggressive administrative and diplomatic steps to protect domestic producers.

While Cramer has promoted both ideas, he said they are more aimed at sending a message to Saudi Arabia against overproduction. He said tariffs would not provide that much new revenue.

Murkowski said tariffs could play a role but added, "That cuts both ways."

"I think we need to be careful about that because of how our industry is structured here and what it is that our refineries need," she said.

Political support may not exist for tariffs, but Cramer said he expects he would be able to get bipartisan support for a provision to this year’s defense authorization bill that would withdraw U.S. troops from Saudi Arabia if that country overproduces.

There are also growing GOP calls for Trump to block approaching tankers carrying Saudi crude from unloading at U.S. ports.

On Friday, House Republicans asked Commerce Secretary Wilbur Ross to investigate what they called a "flotilla of ships headed to the United States loaded with Saudi crude oil."

Cramer blasted some U.S.-based refineries that continue to accept crude from Saudis even as domestic producers are struggling, noting some have doubled and tripled their loads in recent weeks from the kingdom.

Murkowski said she too is angry over the Saudi shipments, which she said run counter to assurances she received from the Saudi ambassador to the United States after the OPEC-Russia deal to lower production was announced this month.

"What we’re seeing now is an influx that is coming towards us, that I’m told is about 20 tankers filled with 40 million barrels of oil," Murkowski said.

"That’s seven times more than our normal monthly imports from Saudi Arabia," she added. "I don’t know who bought that, I don’t know whether it was U.S. refiners or someone else, but we sure know that we don’t need it right now."

Trump, she said, would be justified in blocking those shipments. "I think those tankers should find another place to go," she said. "Take it somewhere else. Don’t worsen our oversupply and take up the limited storage areas."