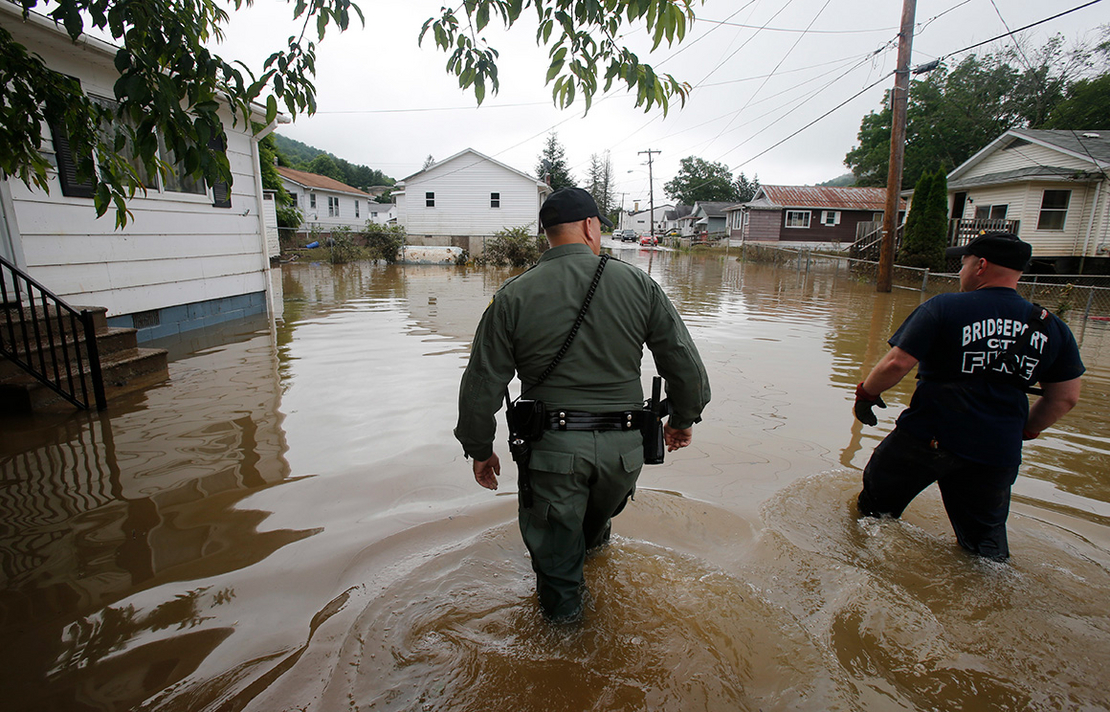 A state trooper and a local fireman wade through flooded streets in Rainelle, W.Va., after a downpour trapped dozens of people in 2016. AP Photo/Steve Helber

It rarely has hurricanes, tornadoes or wildfires. Its temperatures have increased at a slower rate than elsewhere in the United States.

But West Virginia is deceptively vulnerable to climate change because a huge number of its residents live in flood zones, and global warming is intensifying the kind of rainstorms that have caused deadly river overflows across the state.

Environmentalists are highlighting West Virginia’s surprising climate vulnerability after Sen. Joe Manchin (D-W.Va.) said he would not support the “Build Back Better Act,” which features ambitious plans to reduce emissions and adapt to global warming.

A recent state-by-state analysis of flood risk found that West Virginia has the highest percentage of roads, commercial properties and infrastructure in danger of being flooded — ahead of every state in the continental U.S., including Florida and Louisiana.

Fifty-one percent of West Virginia’s infrastructure facilities face significant flood risk. So do 46 percent of its road miles and 37 percent of its commercial properties, according to the nonprofit First Street Foundation. Each of those figures is roughly twice the national average.

For residential properties, 28 percent in West Virginia is at risk of being flooded — a figure that is behind only Louisiana and Florida, according to First Street.

“We were super surprised to see West Virginia at the top of the list,” First Street research director Jeremy Porter said.

West Virginia’s flood risk results largely from its steep, mountainous terrain, which has forced people to build at the bottom of river valleys. And that risk is growing.

“With the changing climate, in particular with the increase in impacts from heavy precipitation events that fill rivers and river valleys, you’re seeing more and more flooding,” Porter said.

Parts of West Virginia are still recovering from a cascade of devastating river floods in June 2016 that killed 23 people, wiped out thousands of buildings and caused $1.1 billion in damage. NOAA said the flooding resulted from a “thousand-year” downpour — rainfall so intense that it’s expected to occur only once every 1,000 years.

“Creeks and rivers turned into raging torrents, washing away anything in their paths,” NOAA wrote.

Federal Emergency Management Agency records show that West Virginia has experienced more flooding disasters since the 1950s than any state except for California and Texas, which are roughly 10 times as large and have roughly 20 times as many people.

FEMA records also show that West Virginia has one of the nation’s highest per capita rates of flood insurance claims, according to an E&E News analysis of National Flood Insurance Program data.

Yet West Virginia residents are among the nation’s most skeptical of climate change — an outlook that helps explain Manchin’s opposition to "Build Back Better" and other climate legislation.

“There’s a lot of identity tied to coal and timber,” said West Virginia University geography professor Jamie Shinn, who is an expert in climate adaptation. “That makes it really complicated” to link flooding to climate change.

“There’s a correlation between climate change and anti-fossil fuels in people’s minds,” Shinn said. “It’s scary to think about making an economic transition when what has been the economic foundation for a century is the extractive industry.”

Perry Bryant, founder of the West Virginia Climate Alliance, said “there is a legacy, an almost romanticization of coal in this state. It really is embedded in our cultures. It’s part of our music, it’s part of our literature. And that’s very difficult to give up, even when you understand it’s a carbon-intense fuel.”

“We see that the last frost occurs earlier and earlier in the year and the first frost occurs later and later in the fall. There’s an explosion of ticks and other pests that don’t die off because of mild winters,” Bryant said. “We see those kinds of things, and we’re beginning to realize there’s really something seriously wrong with the climate.”

But large-scale disasters and heat waves, which can build awareness of climate change, have been minimal in West Virginia.

The last major hurricane to hit West Virginia — Superstorm Sandy in 2012 — caused only minor damage. The state’s previous hurricane — Isabel in 2003 — caused minimal damage and affected only 10 of the state’s 55 counties.

The number of “very hot” days in West Virginia — when the daytime high temperature exceeds 95 degrees Fahrenheit — has been “below average” since 2000, according to the National Climate Assessment released in 2018.

Tornadoes, which may be linked to climate change, occur “occasionally” in West Virginia “and are usually weak,” the climate assessment found.

The drought that has overwhelmed much of the western U.S. this year has barely touched West Virginia, according to the U.S. Drought Monitor.

And although all regions of West Virginia have warmed since the early 20th century, “they have warmed less than most of the United States,” EPA wrote in 2016.

Shinn of West Virginia University and other educators have tried — with little luck — to promote climate awareness by creating a project that gives high school teachers in the state ready-to-use lessons about climate change.