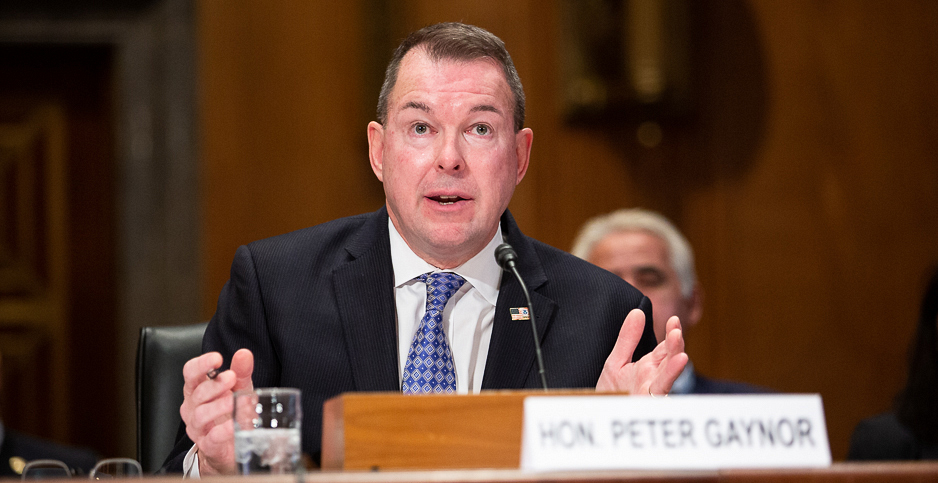 FEMA Administrator Peter Gaynor oversees an agency that has lost key officials as it battles the coronavirus pandemic near the start of hurricane season. Francis Chung/E&E News

The Federal Emergency Management Agency has lost several senior officials in recent months, leaving vacant key positions as the agency leads the response to the COVID-19 pandemic and prepares for the Atlantic hurricane season that begins June 1.

The latest departure occurred in March — as President Trump put FEMA in charge of the federal pandemic response — when Jonathan Hoyes left as director of the agency’s public assistance division to join a disaster consulting firm in Washington.

In his new job, Hoyes has advised public officials and hospitals on how to access billions of dollars in disaster aid from FEMA.

Another senior FEMA official, Joshua Dozor, plans to leave his position as a deputy administrator for disaster recovery in the coming weeks, The Wall Street Journal reported Monday. FEMA confirmed his exit, saying that Dozor is "departing to pursue an opportunity in the private sector."

The moves come at an unprecedented time for FEMA and follow the back-to-back departures three months ago of the agency’s second-in-command and of its former acting administrator. The deputy administrator position remains vacant.

Senior-level vacancies weaken the agency’s authority inside the Trump administration as decisions are made about responding to the pandemic, former FEMA Administrator Craig Fugate told a House panel Friday.

"If they’re not at the table representing agency interests at the policy level, where decisions are being made, then FEMA gets left out. And I think this is a heavy burden for the administrator to do by himself," Fugate said during an informal question-and-answer session with Democrats on the House Homeland Security Committee.

Peter Gaynor has been FEMA administrator since January.

The head of the union that represents some FEMA employees said it is unusual for so many senior officials to leave the agency in the middle of a presidential term.

"It leaves a lot of senior FEMA management positions temporarily filled … and does leave a leadership gap for a period," said Steven Reaves, president of Local 4060 of the American Federation of Government Employees.

FEMA said in a statement to E&E News that "we have not taken our eye off the ball in handling other disasters that may occur during this time. And we’re specifically focused on the upcoming hurricane season."

FEMA recently opened a second operations center next to the Washington-based National Response Coordination Center "to better respond to the pandemic and any upcoming disasters," the agency said. "Every member of the FEMA team is an emergency responder."

FEMA has faced criticism over its effort to distribute personal protective equipment equitably across the United States, which has involved diverting some shipments from their intended recipients.

The New York Times reported Tuesday that a team of volunteers recruited by Jared Kushner, the president’s son-in-law, to help with the pandemic has interfered with requests from officials to FEMA for the equipment.

ProPublica reported last month that the White House had directed FEMA to award a $96 billion no-bid contract to a company for respirators and filters for medical workers in New York.

Fugate warned about a dearth of senior officials. "If you don’t have the political appointees, are you represented in the administration where decisions are being made?" he told Rep. Donald Payne Jr. (D-N.J.), who had voiced concern about FEMA’s high-level vacancies.

FEMA has been without a deputy administrator since Daniel Kaniewski left abruptly in late January after holding the Senate-confirmed position since September 2017. Kaniewski submitted his resignation on Jan. 30 and left the next day, according to BuzzFeed News. He declined to tell BuzzFeed why he was leaving.

On March 2, Kaniewski began working as a managing director for Marsh & McLennan, a risk management firm, according to a company news release.

At the same time, former FEMA acting Administrator Jeffrey Byard left the agency after the Trump administration withdrew his nomination to be the agency’s permanent administrator due to problems uncovered during a background check. Byard now works at a nonprofit disaster response organization.

In March, Jonathan Hoyes left FEMA and joined Witt O’Brien’s, a disaster consulting firm founded by former FEMA Administrator James Lee Witt, who is no longer associated with the company. At FEMA, Hoyes "led field delivery of infrastructure and community assistance" and ran the agency’s public assistance division, which gives states billions of dollars for disaster recovery, according to Hoyes’ company biography.

Hoyes left FEMA on March 16, three days after Trump put the agency in charge of the federal pandemic response.

Witt O’Brien’s did not respond to an email from E&E News.

Hoyes has participated in several recent webinars in which Witt O’Brien’s officials advised hospital administrators and county officials on how to seek a portion of the nearly $3 trillion that Congress has approved for the pandemic response.

In a session Monday with the National Association of Counties, Hoyes gave advice on how to get disaster aid from his former agency, offering tips and strategies for navigating FEMA’s confusing approval process.

Hoyes was joined on the webinar by colleague William Roche, another former senior FEMA employee who left the agency in December. Roche was director of FEMA’s recovery division in California.