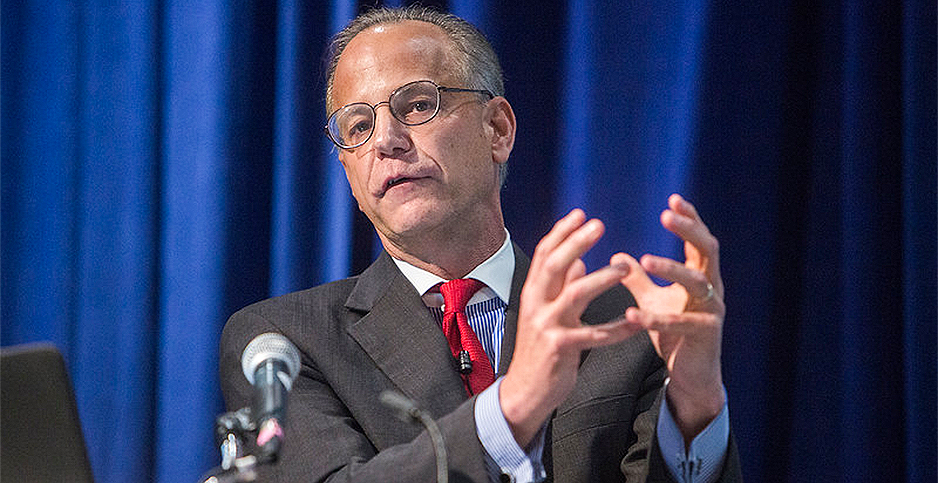 Scott Angelle, director of the Bureau of Safety and Environmental Enforcement, has met with multiple oil and gas executives while in office, according to his calendar. Offshore Technology Conference

Scott Angelle, President Trump’s chief offshore oil and gas regulator, had dozens of meetings and phone conversations with oil and gas interests after joining the Trump administration in 2017, according to documents viewed by E&E News.

His public schedule and call logs, obtained by the group American Oversight, show at least 10 calls with the American Petroleum Institute (API) and numerous calls with companies, including Chevron Corp. and the fast-rising Texas independent Hilcorp Energy Co. Trump picked Angelle to head the Bureau of Safety and Environmental Enforcement (BSEE) at the Interior Department in 2017. The position does not require Senate confirmation.

Angelle hails from Louisiana, the service hub for oil production in the Gulf of Mexico and home to a growing petrochemicals industry. He has long defended frequent interaction with an industry that he believes gets a bad rap.

Angelle shares his cellphone number at industry events and puts it on his business card, where "it should be," he told E&E News earlier this year. He kept the phone number after comedian John Oliver released it on his television show in a segment that ultimately went viral (Energywire, Nov. 13, 2018). He also told E&E News that companies are "partners," not adversaries.

The calendar and the call logs reflect that point of view.

Three days after Interior named Angelle director of BSEE, he participated in an "introductory" call with Jeff Shellebarger, president of Chevron North America Exploration and Production, the documents show.

The interactions have not abated over time. Angelle also met with both fossil fuel developers and service companies.

He took more than a dozen calls over the years with Holly Hopkins, senior policy adviser for API. Those calls are in addition to calls on the schedule directly with API. Hopkins was also part of an interagency call on Feb. 26 titled "BSEE/DOI Final Revisions to the Blowout Preventer Systems and Well Control Rule," according to the schedules.

The rule is one of the most controversial that Angelle juggled for the Trump administration.

As director of BSEE, Angelle has been on the front lines of implementing a controversial deregulation approach to federal oversight, including the weakening of blow-out preventer standards for offshore development.

The Obama administration crafted the rule following the Deepwater Horizon disaster of 2011 after failed blow-out preventers led to the explosion that killed 11 men. The Trump administration pruned back the standards, calling them "safer" and "smarter," to the ire of watchdog groups and the concern of Angelle’s predecessor (Energywire, Jan. 7).

"Angelle firmly believes in transparency and that good ideas and decisions are the result of input and feedback from diverse perspectives," BSEE spokeswoman Eileen Angelico said in an email. "As a result he has met face-to-face with the people who are impacted by BSEE’s rules and regulations — stakeholders from industry, academia, non-governmental organizations, local and state government representatives and others — throughout his two-year tenure as director."

Angelico also defended time spent with API in particular, noting that the industry group is recognized as a "consensus standards body" under the National Technology Transfer and Advancement Act, which instructs agencies to "use standards developed or adopted by voluntary consensus standards bodies rather than government-unique standards, except where inconsistent with applicable law or otherwise impractical."

Reid Porter, a spokesman for API, said interaction with regulators is regular business practice for the group.

"API has historically and continues to regularly engage with officials at all levels of the government, local and federal on public policies and industry best practices and standards that will strengthen our country, and benefit all American workers, consumers, and the environment," he said in an email.

A spokeswoman for Chevron said dialogue with regulators was key to regulations that are clear and technically correct, and that can be effectively administered.

"Over the past decade, industry has worked to raise the bar on its own safety and environmental performance," said Veronica Flores-Paniagua in an email. "Working with governments at the local, state and federal level is an integral part of this process."

The government ethics group American Oversight argued that Angelle’s relationship to oil and gas is partially expected, but that the regulator fails to offer equal access to watchdogs or conservation groups that may want stricter environmental and safety standards.

"The way people spend their time reveals their priorities," Austin Evers, executive director of American Oversight, said in an email. "Scott Angelle clearly cares the most, even exclusively, about catering to the businesses he’s supposed to be regulating."

American Oversight, which obtained Angelle’s schedule via a public records request, is a left-leaning organization formed by activist lawyers after Trump’s inauguration.

Angelle is the fourth person to hold the job since BSEE was created in 2011 following the Deepwater Horizon explosion.

In earlier years, he was a landman, the highly competitive job of securing drilling locations for oil and gas companies. He was also Louisiana’s secretary of natural resources from 2005 to 2012, before working on the state’s Public Service Commission. He made a failed bid for Louisiana governor in 2015, according to a Times-Picayune story at the time.

Angelle had urged an audience of industry representatives in 2017 to take advantage of the "business opportunity" of engaging with the administration by calling or texting his cellphone, which he then displayed.

Oliver broadcast the phone number on his show and burned the regulator for inviting backdoor conversations.

"The incredible moment is when he makes it painfully clear exactly how accessible he — the man in charge of enforcing safety, remember — is willing to be to industry leaders," Oliver said.

Following the comedy show’s airing, Oliver fans flooded Angelle’s phone with text messages ranging from the lewd to the comic, according to an E&E public records request of Angelle’s phone calls and texts.

One person subscribed Angelle to Cat Facts — a services that sends details such as "Cats can be right-pawed or left-pawed."

In other texts, Angelle was called names or urged to be a stricter regulator of industry.

BSEE did not comment on the texts at the time, but spokeswoman Tiffany Gray defended her boss’s ties to oil and gas.

"The fact that Director Angelle deeply understands the industry we regulate is a good thing," she said. "He is not the first Interior Department official to have experience in the industry he oversees — senior Obama administration leadership did, as well — and he is extremely qualified to lead this organization."