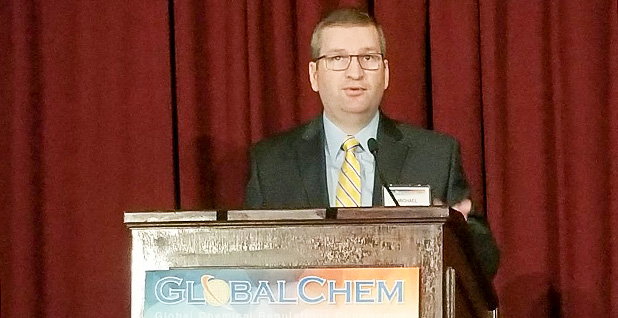 The head of U.S. EPA’s Scientific Advisory Board today said he wasn’t sure if man-made emissions of greenhouse gases were causing climate change.

"I haven’t studied that," he said along the sidelines of the American Chemistry Council’s GlobalChem conference. "I try to stay in my lane. I have too much really in my field to keep up with to jump over here and study that."

Honeycutt, who has been leading the SAB since Feb. 18, received a Ph.D. in pharmacology and toxicology from the University of Louisiana, Monroe, in 1993, according to his profile on the business networking site LinkedIn.

As head of the SAB, Honeycutt is now tasked with providing scientific advice to EPA Administrator Scott Pruitt and congressional committees with oversight of the agency.

That means Honeycutt and his board will likely have to weigh in on the regulation EPA puts forward to replace the Clean Power Plan, the Obama administration’s signature rule for addressing carbon dioxide emissions from power plants, which the vast majority of scientists believe are a primary driver of global warming.

Honeycutt, who has led the Texas Commission on Environmental Quality’s toxicology division for over two decades, argued that his lack of knowledge about climate science wouldn’t be a problem.

"We have people on the board who that’s their field of study," he said. "And I would rely heavily on them. So anything that comes up, they would certainly be on any subcommittee and actively involved in any of the discussions."

He added, "I just haven’t dealt with it at all. Not at all."

Pruitt, Honeycutt’s new boss, doesn’t deny that climate change is occurring. But he has raised questions about humans’ role in warming the planet.

"I think that measuring with precision human activity on the climate is something very challenging to do, and there’s tremendous disagreement about the degree of impact," Pruitt told CNBC last year.

Those comments, which came shortly after Pruitt took control of EPA and began rolling back its climate research efforts, prompted an outcry from many scientists who have studied global warming (Greenwire, March 13, 2017).

Honeycutt also declined to comment on past statements Pruitt has made questioning scientific support for the theory of evolution.

"I can’t speak for Administrator Pruitt, and I don’t really know that that’s within the realm of the Science Advisory Board," he said. "It just doesn’t seem like a question that I should address."

Pruitt’s recently unearthed comments on evolution were provided to Politico by an anonymous source.

"There aren’t sufficient scientific facts to establish the theory of evolution, and it deals with the origins of man, which is more from a philosophical standpoint than a scientific standpoint," Pruitt said on a local talk radio show in 2005 when he was an Oklahoma state senator.

Pruitt’s views on evolution, which EPA didn’t dispute, are similar to those held by many other Christian conservatives but well outside the scientific mainstream. Evolution is a core theory that, while unprovable, is supported by a broad range of verifiable scientific evidence.

Honeycutt, who said he plans to lead his first full meeting of the SAB in May or June, is willing to look into the theory of evolution for Pruitt.

"If that’s something he would like the board to take up, he can direct us to," he said.