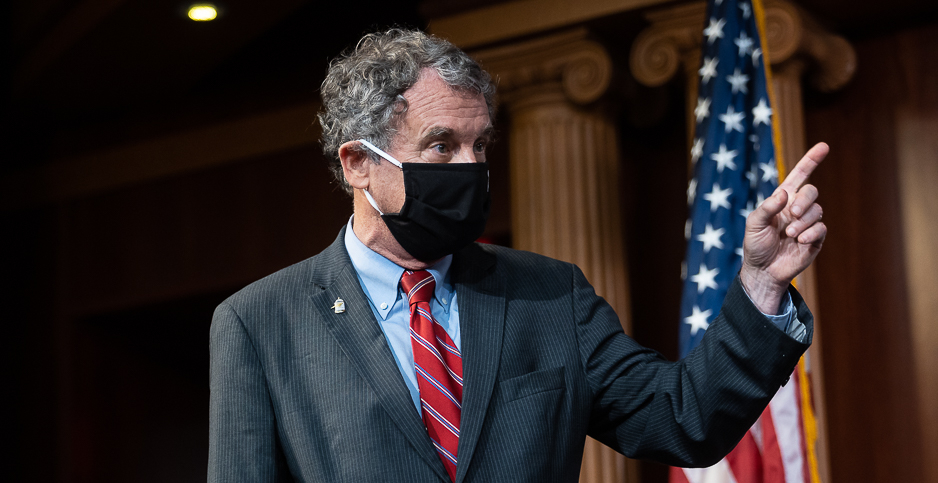 Sen. Sherrod Brown (D-Ohio) is in line to become chairman of the Banking Committee. He wants financial regulators to ensure that banks and insurance companies are factoring climate risks into their investments and balance sheets. Francis Chung/E&E News

Even before Democrats won control of the Senate last week, experts said the next four years could be ripe for pushing financial regulators — and Wall Street giants — forward on climate change.

Now momentum is accelerating. The Democratic takeover in the Senate increases the likelihood that lawmakers will seek to curb climate-related financial risks, according to observers.

That has a lot to do with Sen. Sherrod Brown (D-Ohio), a longtime Wall Street critic who is set to become chairman of the Banking, Housing and Urban Affairs Committee.

Brown has pushed for years to break up big banks and improve affordable housing. More recently, he’s emerged as a leading voice in a growing coalition of Democrats who are concerned about the financial system’s climate vulnerabilities, and the ways that financial firms themselves exacerbate global warming.

Brown is expected to ratchet up pressure on financial agencies and the private sector to tackle climate risks, which advocates say have the potential to upend U.S. financial stability.

"As Chairman of the Senate Banking and Housing Committee, I will demand and push regulators, the administration, and the entire financial services industry to account for climate change’s impact on the economy," Brown said in a statement to E&E News.

Financial regulatory expert Gregg Gelzinis, of the left-leaning Center for American Progress, acknowledged that doing so will be challenging.

But Gelzinis added that Brown has clearly demonstrated his willingness to take on Wall Street. "That’s the type of leadership that it’s going to take to advance an agenda on climate policy," Gelzinis said.

Brown indicated as much during an event hosted by CAP in December — several weeks before anyone expected that he would be chair of the panel charged with overseeing financial agencies (Climatewire, Dec. 21, 2020).

"Financial regulations need to do more than prod Wall Street to protect itself from climate risk. Breaking up the big banks, limiting the risky activities they invest in would clear the way for Congress and agencies to take bolder action," Brown said.

"It would make it easier to stop Wall Street from funding industries that fuel climate change and put all their other assets at risk," he said.

To be sure, addressing the economic havoc brought on by the pandemic will be a top priority for Congress and the Biden administration.

Brown told reporters Wednesday that he expects Democrats to get COVID-19 relief measures out the door as soon as possible, according to The Columbus Dispatch.

Kate Judge, a law professor at Columbia University who specializes in financial markets, said there are several ways Brown could move the needle.

He could hasten the confirmation of Biden’s financial nominees, which Judge said would "breathe additional wind into the sails" of the Biden administration’s work to undo President Trump’s deregulatory efforts.

And Brown will set the committee’s agenda, increasing the likelihood that it will hold hearings focused on climate-related financial risk. Judge said that would apply pressure on regulators to address the issue and give them more of a "backbone" to take steps that may have been less palatable to Republican leadership.

"I think all the financial regulators are going to expect that they need to have answers to questions about what they are doing with respect to matters of climate change, or access to credit, or addressing inequities that are perpetuated by the financial system," said Judge.

"The implications, while not radical upfront, I think could add up significantly," she added.

Many financial agencies already have the power to assess and address climate change without lawmakers — whether through regulations, conducting climate-focused research or officially incorporating climate risk assessment into their mandates.

"While there’s certainly going to be more change in this space, and more possibility for legislation … the more progressive end of the agenda I still don’t think is likely to become law in the next four years," said Jennifer Schulp, who directs financial regulation studies at the Cato Institute, a libertarian think tank.

Sen. Elizabeth Warren (D-Mass.), for instance, introduced a bill in 2019 that would require all public companies to disclose their climate vulnerabilities to investors.

The same year, Sen. Brian Schatz (D-Hawaii) put forth a bill that would require the Federal Reserve to conduct climate change stress tests.

Brown did not co-sponsor either bill. But he has repeatedly called on financial agencies to identify industry risks from rising temperatures while ensuring that the economy helps workers and communities that are vulnerable to climate change.

"Whether there’s legislation or not, and whether it passes the Senate or not, on a lot of these disclosure and risk issues I think we’ll see that coming from the agencies themselves under existing authority," Schulp added.

Gelzinis of CAP doesn’t disagree. But he does think the Senate power switch opens a legislative window. "It’s not going to necessarily fly through, but it’s at least a possibility now," he said.

The Bank Policy Institute and the Financial Services Forum, two industry trade groups, declined to comment for this story.

But in 2014 — when there was a possibility that Brown would chair the banking panel — a bank executive told The Washington Post that the idea of him heading the panel was "frightening." The executive added that Brown didn’t seem willing to find "common ground" with Wall Street.

Brown aside, former Federal Reserve attorney Jeremy Kress, who is an assistant professor at the University of Michigan, noted that businesses in general — and banks in particular — prefer divided government because it often creates regulatory gridlock.

While the Dow Jones Industrial Average actually surged Wednesday in response to the Georgia election results — due in part to the prospect of more fiscal stimulus — Kress believes it’s likely that "folks who are in charge of regulation at large banks … are not happy with the outcomes of the elections."

Schulp of Cato agreed in part, noting that she doesn’t think the financial services industry should feel it’s "in the clear."

"There’s certainly going to be action … and a lot more pressure from the administration, period — not just the Senate Banking Committee — to live up to some of the commitments that [firms have] been making on the climate front," she said.

On the regulatory side, she warned against lawmakers’ using financial regulators to effect climate policy, which she thinks would be better handled by other agencies.

Others, meanwhile, see Biden’s win — and Democrats’ Senate takeover — as a chance to accelerate an issue that’s already gaining steam in the United States.

"These ideas about climate financial risk have been in the brainstorming stage for four years or so, and they’ve not really, I think, gotten a fair hearing at the financial agencies," said Kress.

"But now the door’s open," he added. "So this is where the rubber’s going to meet the road."