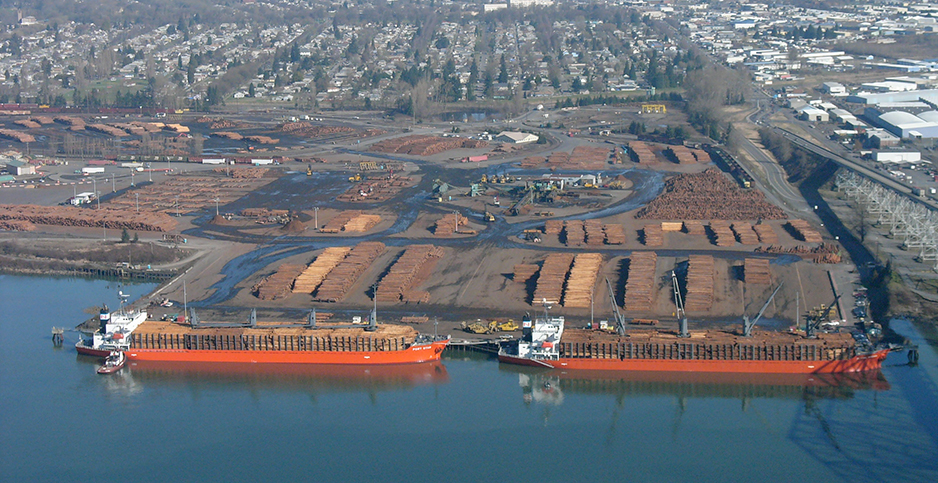 A lumber shipping yard in Longview, Wash. Cowlitz County is considered by the Federal Emergency Management Agency to be one of the most vulnerable areas in the U.S. to coastal flooding. Sam Beebe/Flickr

The county most at risk for coastal flooding is not in Florida, North Carolina or New Jersey, according to the Federal Emergency Management Agency.

It’s not even on a coast.

It’s Cowlitz County, Wash., population 102,000, about 50 miles inland from the Pacific Ocean on the Columbia River.

The ranking comes from a groundbreaking analysis by FEMA that measures disaster risk in a new way.

Instead of analyzing only the likelihood of a disaster and the damage it would cause, FEMA also assessed 78 socioeconomic factors such as a community’s poverty rate, racial composition and church membership, and the percentage of residents with high-speed internet.

Those factors are important — and often overlooked — because they determine how much a community will suffer from a disaster and how quickly and thoroughly it will recover.

The index has the potential to alter how the nation prepares for climate change as President-elect Joe Biden emphasizes climate issues. It also could direct more attention and money to disadvantaged communities by considering "social vulnerability" factors such as the percentage of people who are minorities, recent immigrants or non-English speakers.

And there are several surprises.

The index represents a new way of evaluating "disaster risk" to warn communities about their potential suffering.

"It’s an awesome tool," said Susan Cutter, director of the University of South Carolina’s Hazards and Vulnerability Research Institute, who helped develop the index. "It’s going to be incredibly useful for planning and mitigation planning."

The index rates the risk of each of the nation’s 3,100 counties and 73,000 census tracts to 18 separate natural hazards including avalanches, heat waves, floods and storms. A census tract is an area of about 5,000 people for which the Census Bureau collects demographic data.

The index features more than 1 million "risk scores" that rate on a 100-point scale the combined risk and vulnerability of a geographic area to a natural hazard. The area with the highest risk to a hazard gets a score of 100. Each county and census tract also has a cumulative score that rates its general risk to disasters.

"It’s going to be very useful for the public to begin to understand what the risks are in their state or in their county, and how these risks can be amplified by the level of social vulnerability and attenuated by strong community resilience," Cutter said.

Brenda Ekwurzel, director of climate science at the Union of Concerned Scientists and a co-author of the latest National Climate Assessment, said FEMA needs to promote the index to communities so they understand how to use it.

"That’s where a report like this becomes real," Ekwurzel said.

The index does not account for climate change except to incorporate NOAA’s sea-level rise projections.

Those projections help explain why Cowlitz is the nation’s most vulnerable county to coastal flooding: Sea-level rise is expected to elevate the Columbia River and endanger the heavily populated and developed area along the river in Cowlitz County.

"Coastal flooding I would have thought is really prevalent on the East Coast with hurricane impacts," Schnabler said.

Most of the counties with the highest risk of coastal flooding are on the East Coast.

But the factor that puts Cowlitz County ahead of second-place Ocean County, N.J., which suffered enormous damage during Superstorm Sandy in 2012, is Cowlitz’s resilience to disasters. Resilience measures a community’s ability to withstand a disaster and incorporates 49 factors such as housing quality, homeownership rates, flood insurance coverage, education levels, and affiliation with religious and civic groups.

FEMA gave Cowlitz a resilience score of 53.2 on a 100-point scale. Ocean County’s score is slightly better at 57.2.

Schnabler welcomed the top ranking for coastal flooding, whose value he was quick to grasp.

"I like being there because it gives me ammunition to go and ask for federal grants to go and mitigate even further," Schnabler said. "There are counties that have way higher flood potential than we have. But I’m not disappointed to be No. 1."

Cowlitz County was not the only surprise.

The county with the highest tornado risk is the Bronx, N.Y., which was rated way ahead of tornado hot spots in the Great Plains and the Southeast. The main difference is that although tornadoes in the Bronx are rare, they are highly destructive when they occur because of the county’s concentration of people and buildings.

Jasper and Newton counties in Missouri — home of the notorious Joplin tornado outbreak that killed 158 people in 2011 — scored far below the Bronx, with tornado risk scores of 18.3 and 12.8, respectively.

The tornado rating "gives the Bronx the ability to have that conversation" about whether to spend more money protecting against tornadoes, said Grimm of FEMA. "It enables a conversation to happen where a more informed local decision could be made."

The index could lead FEMA to direct resources to communities with low resilience and high social vulnerability. Social vulnerability measures a community’s susceptibility to disasters based on 29 factors related to race, class, ethnicity and elderly population.

"There’s been a lot of discussion and press on where funds go. That’s something we’re looking at very seriously now at FEMA — the social equity — and how do we effect our programs to take this into account," Grimm said.

Although Cowlitz County’s ranking is surprising, many of the risk rankings follow conventional wisdom. Here are the counties that FEMA ranks as facing the most risk to six climate-related disasters in addition to coastal flooding.

Drought risk is measured largely by damage to agriculture. Imperial County, in California’s southeast corner adjacent to Mexico and Arizona, is projected to face substantial agriculture losses during a drought.

But the county gets the top spot in drought risk because of its very high social vulnerability and very low disaster resilience. Nearly a quarter of the county’s 180,000 residents live below the poverty line, and 80% are Hispanic.

Heat wave risk is measured largely by its human toll. There is no property or agricultural damage from heat waves.

FEMA estimated that heat waves will kill eight people a year in Philadelphia, the highest number of any county after Cook, which is projected to see 10 heat-related deaths a year.

This is probably the least-surprising ranking of all. With billions of dollars of coastal property and tens of thousands of people living in high-risk hurricane zones, the threat facing Miami-Dade is substantially higher than that to second-place Collier County in southwest Florida.

Miami-Dade’s well-known exposure is compounded by its lesser-known social vulnerabilities, such as a 16% poverty rate and a population that is 53% foreign-born and 69% Hispanic. Nearly 75% of the county’s 2.7 million residents speak a language other than English at home.

With just 1,400 residents and little development, Wheeler County may seem like an odd pick to be the most vulnerable to landslides. But unlike most disasters, landslides are more dangerous to people than to buildings. FEMA projects that landslides will cause more human damage in Wheeler County than anywhere else.

Wheeler has high social vulnerability due to its 19% poverty rate, generally high levels of unemployment and small number of college graduates.

The same characteristics that make Miami-Dade most at risk to hurricanes make it the biggest target of riverine flooding.

It’s no surprise that the highest wildfire risk is in Southern California, with its endless development in wildfire-prone suburbs.

Riverside County rates just ahead of its two neighbors because it has so much development in the wildland-urban interface and a low resilience score.