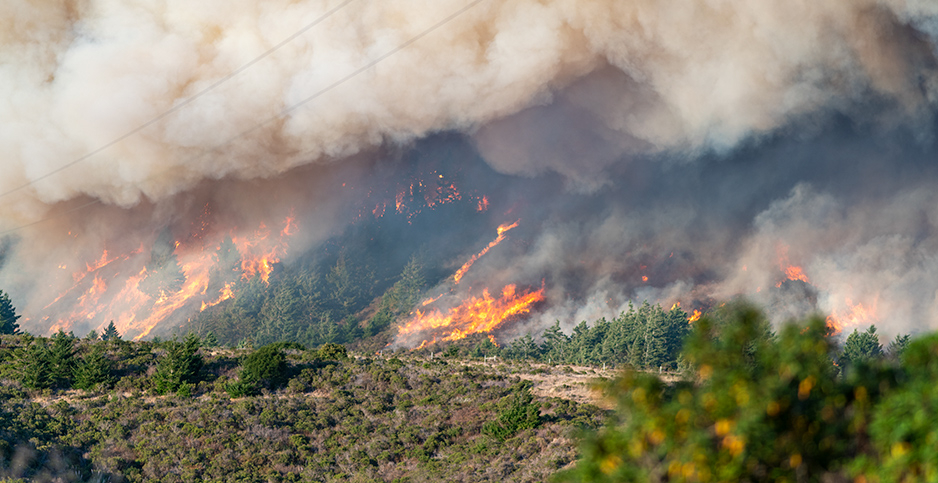 After a wildfire ripped through central California last month, residents in the Riverside Grove neighborhood in the Santa Cruz Mountains discovered another danger: contaminated water coursing through their pipes.

Benzene, a chemical tied to cancer, leukemia and anemia, was detected in the town’s drinking water after 7 miles of plastic water piping was torched in the CZU Lightning Complex Fire south of San Francisco. Plastic pipes are used for their flexibility in earthquake-prone California. Today, about 450 homes there remain under a "do not drink" advisory.

Riverside Grove is one of three fire-damaged areas in California where benzene has been detected so far in the latest round of historic wildfires, said Dan Newton, the assistant deputy director of California field operations within the Water Resources Control Board’s Division of Drinking Water.

Poisoned drinking water is a growing threat to communities along the West Coast experiencing larger and more intense blazes fueled by high temperatures, strong winds and a shifting climate. The blazes are also increasingly clashing with urban hubs. In California alone, more than 2.7 million people live in very high fire hazard severity zones, according to the Associated Press.

With the beginning of the wildfire season so extreme, there’s growing fear of chemical contamination in areas seeing a new breed of fires that decimate entire communities along with the water systems, said Newton.

"I believe we’ll have a handful of systems, I hate to say it, that have those characteristics or experience fire in that fashion and will likely have some contamination," Newton said.

The water board and EPA are pushing to find out exactly how contaminants end up in the water and how to protect residents already reeling from fire damage and an ongoing pandemic. State and federal researchers are analyzing sections of pipes from Paradise, Calif., where a massive wildfire devastated the town two years ago, killing 85 people. Just like Riverside Grove, benzene was found in Paradise — and researchers want to know how it got there and how communities can properly detect the carcinogen and flush it away once it’s found.

"It’s happening in the distribution line going to households, potentially into their plumbing," said Corine Li, manager of EPA’s Drinking Water Office for the Pacific Southwest region. "This is a whole new area that we’re engaged with our Office of Research and Development."

But some experts say the more urgent priority should be policy changes and are calling for greater state and federal oversight of water distribution systems where fire damage and contamination are occurring.

Central to that concern is that California sets a benzene limit in water of 1 part per billion, whereas EPA’s standard is higher at 5 ppb. In communities devastated by wildfire, benzene has been found as high as 40,000 ppb. In the Riverside Grove neighborhood, benzene has so far been detected at between 2 ppb and 9 ppb, with spots at 40 ppb where water had stagnated.

But public water systems under the Safe Drinking Water Act must only ensure water is safe — or under 5 ppb of benzene — at the "point of compliance," where water leaves the treatment plant and enters the distribution system, said Andrew Whelton, an associate professor of civil, environmental and ecological engineering at Purdue University. If benzene is higher past that point in the system, Whelton said, there’s no state or federal requirement to continue testing for contamination.

And while states like California have the authority to require expansive testing throughout the distribution system to protect public health, Whelton said that hasn’t happened.

"There is no [explicit] federal requirement that says ‘if you have benzene showing up in your water distribution, you have to do anything about it,’" said Whelton.

"So, by law, they’re in compliance even though they’ve got hazardous contamination in their drinking water being delivered to customers," he said. "The regulatory framework and the way states interpret their roles does not align with protecting the health and well-being of people after disasters when it comes to drinking water."

A new and stronger breed of fires on the West Coast has increased the urgency for research on water contamination and recovery.

"I don’t think we’ve seen wildfires to this degree, where a water system depressurizes like it does," said Newton. "Traditionally, you don’t have quite the loss of water that is necessary to bring in the superheated gases and directly burn up the water system."

For now, the focus is on pipes and plumbing components made of polyethylene, according to EPA, which can absorb volatile organic compounds (VOCs) from contaminated water or soil, then release those compounds into drinking water even after the source of contamination has been removed and all the originally contaminated water has been purged from the system.

The second factor, Newton said, is that water systems lose pressure during wildfires, create a vacuum, and, "for lack of a better word, it inhales the hot gases and exhaust of the burning structure" into the service lines and possibly the water mains.

"You don’t really know where it came from because responders are still approaching it the way we used to: You go in, you save lives, you protect property," he said. "But while that’s happening and all this chaos is happening under your feet … the contaminated water gets drawn into people’s buildings and basically incapacitates the building because you contaminate the plumbing."

It wasn’t until 2017 that contamination landed on the public’s radar. That fall, the Tubbs Fire killed 22 people in Sonoma and Napa counties. A year later, the Camp Fire in Paradise and Butte County, Calif., destroyed more than 18,000 structures. After both fires, taste and odor issues were reported in affected communities and drinking water tests for volatile organic compounds conducted in several communities found lingering benzene contamination in distribution networks, according to EPA. The source of that benzene is still unknown.

The Tubbs Fire "was the first known reported discovery that you can actually contaminate these distribution systems even when the water treatment plant is not affected," said Whelton.

EPA recommends limiting children’s short-term acute exposure to 200 ppb and long-term exposure to less than 5 ppb to avoid risk of anemia, cancer and decrease in blood platelets. Whelton also noted that California has a short-term exposure limit for children of 26 ppb of benzene created after the Camp Fire.

Now Li heads a team within EPA’s Region 9 office working with the Office of Research and Development in Cincinnati, the agency’s research arm, to gather experimental data to refine a tool for modeling contamination and decontamination of drinking water pipes — and ultimately try to help public water system managers, as well as local, state and tribal officials, restore water systems following disasters like wildfire.

After a chemical spill into the Elk River in Charleston, W.Va., in 2014, EPA began developing a mathematical model to estimate how long contamination may persist in water under various flushing strategies.

Last year, the EPA team began adapting its model to determine how much water it would take to decontaminate water lines, helping system managers decide which pipes to recover and which to replace. EPA said the results will be further investigated at the agency’s Water Security Test Bed at the Idaho National Laboratory to develop best practices after wildfires and other catastrophic events.

Despite the string of deadly wildfires, Whelton said California and other states have yet to change their approach for the chemicals they look for and the extent of testing.

To protect public health, he explained that states would need to know which chemicals of concern are present, and no studies have been conducted to answer that question.

"States generally don’t want to do that because they’re comfortable looking where they’ve always looked," he said. "They don’t have regulatory approaches for changing how they do things. And disasters cause you to have to change."

Carl Reeverts, the former deputy director of EPA’s Drinking Water Protection Division, agreed. He said benzene is a volatile organic compound regulated as a drinking water standard, and EPA sets a level at the tap — but not in the distribution system. "Unless the benzene is detected in sampling at the tap, it cannot be a violation under the drinking water standard," said Reeverts.

California water officials say regular monitoring of water distribution systems doesn’t need to be changed for the rare finding of benzene, something that doesn’t happen "spontaneously" but instead requires specific, catastrophic events — the heating or degrading of plastic pipes and a water system losing pressure. The state does, however, have a rule that regulates for other volatile organic compounds like trihalomethanes, disinfection byproducts known to form on their own in distribution systems, said Stefan Cajina, chief of the north coastal section in the Drinking Water Division at the State Water Resources Control Board.

"Emergency response and disaster response is not in most cases a routine thing. Unfortunately, we’re seeing it kind of routinely in California now," said Cajina. "When it comes to emergency response, it really comes down to the discretion of the regulatory agency and the water system, how to best respond to the type of damage that’s happened."

Cajina said state officials work with water system operators as quickly as possible to protect public health during disasters, help the water system recover and issue advisories to communities immediately after a system loses pressure. Operators of fire-damaged systems, he added, are taking the initiative to carry out extensive sampling programs in their distribution systems.

"It’s not because we have a rule that says they have to, it’s because they know that’s what needs to be done," said Cajina.

When asked about concerns that the state is allowing the use of potentially contaminated water for bathing or sanitary uses, Newton and Cajina said they still need to encourage people to move water through the system if chemical levels aren’t hazardous.

Newton said the threat from not allowing folks to flush the toilet or do dishes or to take a shower with some restrictions is probably a greater threat than the benzene itself at the levels they’re finding.

"These fires come back," said Cajina. "How are you going to tell people they can’t turn on a hose and protect their homes?"