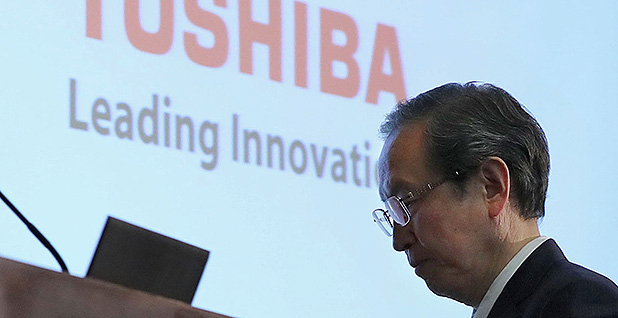 "It just seems to be the most obvious conclusion where a completely functional nuclear plant for the next 60, 70, 80 years is the best option," said Stan Wise, chairman of the Georgia Public Service Commission.

His statement suggests it’s possible that the projects won’t be finished after Westinghouse Electric Co., which is building the reactors, filed for bankruptcy roughly two weeks ago. That loss was compounded yesterday when Westinghouse owner Toshiba Corp. reported a $4.8 billion loss tied to Plant Vogtle in Georgia and the V.C. Summer project in South Carolina.

The Japanese conglomerate had twice delayed release of its figures, and what it released was unaudited. Still, the company said in the earnings documents that Westinghouse’s bankruptcy may not be enough to save it.

"Taking into consideration of the expenditures which the company may pay related to nuclear power construction by Westinghouse Electric Co., WEC’s U.S. subsidiaries and utilities, the company’s liquidity will be significantly impacted," Toshiba said in earnings documents posted on its website.

"For the reasons stated above, there are material events and conditions that raise the substantial doubt about the company’s ability to continue as a going concern."

In Georgia, Wise said the five-member commission is waiting to hear from Georgia Power on what happens next. The utility is supposed to make a decision by the end of the month, unless it asks to extend the interim agreement in the name of taking more time.

Vogtle and Scana Corp.’s V.C. Summer reactors are already roughly four years behind and billions above their original budget forecasts. The financial troubles of Westinghouse and Toshiba have thrown the entire U.S. nuclear industry into doubt.

The utilities and commissions in each state have said all options are on the table. This includes stopping the projects, building one of the reactors, or converting one or both to natural gas.

Wise has laid out those options, as well, but with the billions already spent on Vogtle, "anything less [than finishing] is a worse option," he said.

"It’s going to depend on the financials ,and then it comes back to us," said Wise, who also was on a conference call with a wide range of analysts this week. "I think despite some of the buzz, the best option will be to continue the project."

What to do next

Both electric companies are doing their own independent analysis on what to do next.

The options include renegotiating a contract with Westinghouse, using a new contractor or finishing the reactors themselves. Chief among concerns is how long that will take and how much more it will cost.

Creditors and analysts have already signaled that they are bracing for higher costs. Consumer advocates, worried that consumers will be the ones paying those costs, already have started pointing fingers at regulators and the electric companies.

"We are assessing information provided by Westinghouse to determine the most prudent path forward in the best interest of our customers, company and shareholders," Scana spokesman Eric Boomhower said.

SCE&G is presenting an update to South Carolina utility regulators in a meeting scheduled for this afternoon. A range of consumer and environmental groups plan to flood the meeting, and the Sierra Club’s South Carolina chapter released a list of directives for the Public Service Commission on what to do next.

Some analysts consider Toshiba’s warnings about its future just boilerplate language. The statements follow a series of financial punches including credit downgrades and delayed earnings. Toshiba also faces being removed from the Tokyo Stock Exchange.

"They are warning that there’s a risk, and I don’t find it surprising given all of the activity that’s occurring with the company," said Paul Patterson, a utility analyst with Glenrock Associates LLC.

But Toshiba has verbally promised Southern and Scana it is committed to finishing the nuclear projects and has put forth parental guarantees. It also has given letters of credit to Georgia Power and SCE&G.

Toshiba’s parental guarantees effectively shield the utilities from rising costs at the projects, but analysts from S&P Global Ratings said they doubt those benefits given the company’s overall weak financial condition.

"We would expect that any payment forthcoming would be delayed and therefore could have little value in terms of meeting obligations in a timely manner," S&P said in a March 31 research note.

CEOs from Southern and Georgia Power flew to Japan to talk to Toshiba executives the week that Westinghouse filed for bankruptcy protection, but it’s unclear whether Toshiba can keep whatever promises it made given its financial statements.

"We will continue to take every action available to us to hold both Westinghouse and Toshiba accountable for their financial responsibilities under the engineering, procurement and construction (EPC) agreement and the parent guarantee," Georgia Power spokesman Jacob Hawkins said.