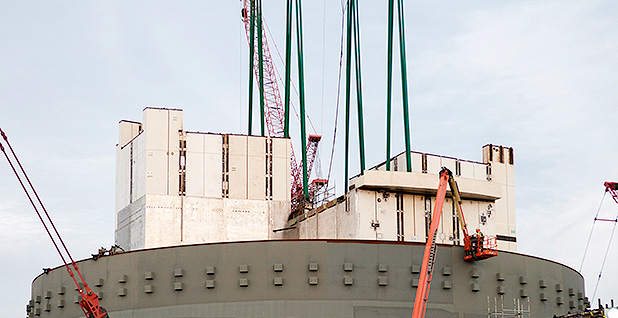 This is because the fixed-price contracts to build the reactors in Georgia and South Carolina may not be worth much more than the paper they are printed on, according to a number of recently filed research notes.

Executives from finically struggling Toshiba Corp. recently confirmed that bankruptcy is an option for its Westinghouse Electric Co. unit, the main contractor building reactors for Southern Co. and Scana Corp. Analysts say they expect the utilities to sue for damages for any cost increases but note that there’s an increased likelihood they will be footing the bill for those cost overruns.

Officials from Southern’s Georgia Power Co. and Scana’s South Carolina Electric & Gas Co. say they continue to monitor the situation and are prepared for any outcome.

Georgia Power spokesman Jacob Hawkins said the company will continue to hold Toshiba and Westinghouse accountable for their responsibilities under their agreement.

Much of the information is speculative, because there are few details from all of the companies involved. Such uncertainty has led ratings agencies to issue credit downgrades and for analysts to have to fill in the gaps.

Fitch Ratings again raised concerns over whether the public power co-owners can recover their portion of project costs. Those utilities already are on "negative watch" or "outlook," Fitch said.

Morgan Stanley issued a detailed report Wednesday saying Southern and Scana face three issues if Westinghouse files for bankruptcy. These include a modification of the fixed price contracts, lawsuits over who must pay for cost overruns, and Toshiba not having enough assets to pay the utilities’ claims.

What’s more, Morgan Stanley analysts said each project could see billions of dollars in cost increases: $3.3 billion for Southern and $5.2 billion for Scana. This is because the projects already have a history of cost overruns, and it’s not clear that the issues behind those have changed.

The saga started years ago with lawsuits between Georgia Power, SCE&G and the contractors building their respective projects. Westinghouse, which is using its AP1000 reactor design at both sites, agreed to buy the nuclear construction business of Chicago Bridge & Iron Co. as part of a wide-ranging legal settlement in 2015.

It’s that deal that has helped place the company and Toshiba in financial turmoil. The issue came to a head in February when Toshiba said it would book a $6.3 billion write-down from the nuclear construction business.

Toshiba has delayed reporting its earnings twice and now must do so by April 11.

Meanwhile, a Westinghouse spokeswoman confirmed that the company has hired a chief transition and development officer from AP Services LLC, an affiliate of turnaround consultancy AlixPartners.

Southern and Scana also have hired their own advisers, according to Reuters.

Neither the utilities nor the firms listed would independently confirm such information to E&E News.

Southern and Scana executives have said they are exploring options on how to finish their projects if Westinghouse cannot. Morgan Stanley analysts take that one step further, saying the utilities would have to reassess project costs to determine whether it is still prudent to finish them.

Both projects have significant sunk costs, so even the idea of stopping them — which both companies have said they would not do — would still leave customers on the hook for paying for what’s been done to date.

Moody’s said Georgia Power would have to have some additional discussions because its project received billions of dollars in loan guarantees from the Energy Department.

"In the event certain mandatory prepayment events occur under the DOE loan agreement, including the termination of the Vogtle EPC contract, Georgia Power could be required to prepay the outstanding amount over five years with level principal amortization," the Moody’s report said.