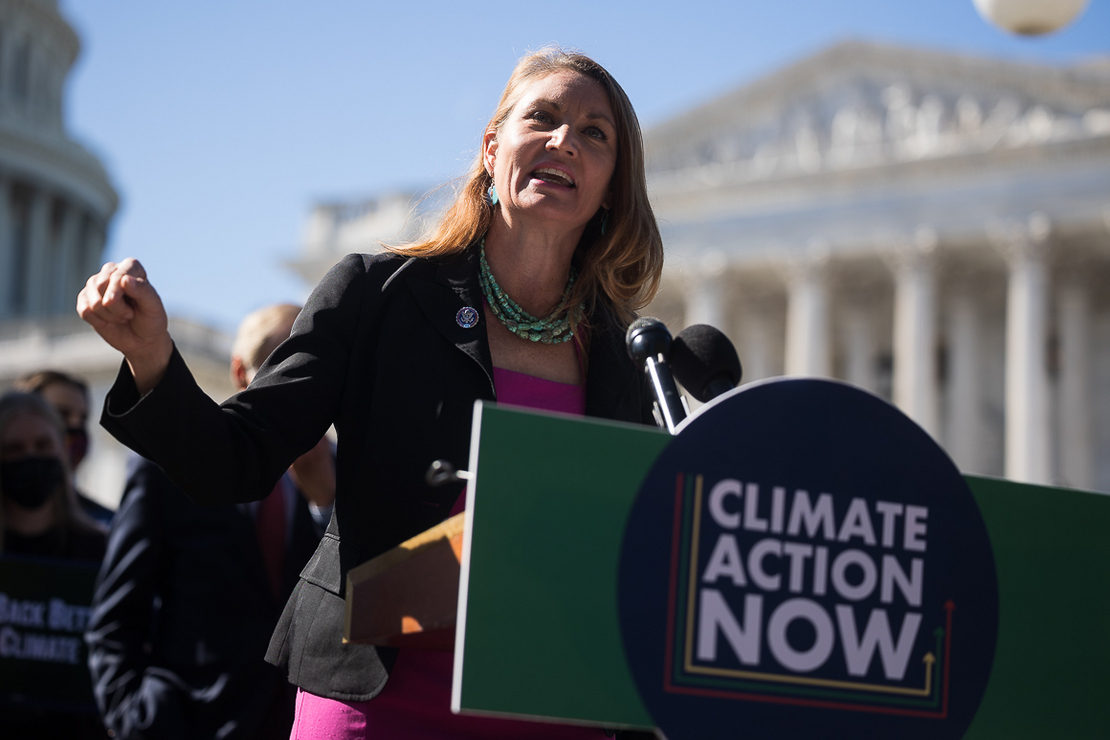 For years, policy wonks who wanted to get the lowdown on New Mexico water went to the "Stansbury Hour."

The informal chats — usually at bars — were named for Melanie Stansbury, the driving force behind the gatherings, which were a breeding ground for legislative and regulatory ideas.

Stansbury is now in a position to try to put those ideas and others into action. In June, she won a special election to fill former Rep. Deb Haaland’s seat after President Biden tapped Haaland for secretary of the Interior Department.

Those who know Stansbury say the timing couldn’t be better. The American West is being strangled by a historic drought, leading to shortages along the Colorado River and elsewhere (Greenwire, Aug. 16).

Experts say the West is begging for new and creative water policies that break a water management paradigm that has dominated the West for a half century and isn’t prepared for a hotter and drier future.

Stansbury, 42, is part of the next generation of water leaders. She’s a "total water nerd," said John Fleck, a former "Stansbury Hour" attendee, before adding she’s the type of policymaker needed to forge solutions for the West.

"It is easy to stand on the outside and say X, Y and Z are the things that ought to be done," said Fleck, the writer in residence at the University of New Mexico Law School’s Utton Center who has written books on the Colorado River. "She understands the realities of constraints, what’s possible, and the important set of political compromises to move forward on effective water policy."

Stansbury has worked on water issues throughout her career, including during stints in the Obama administration, on Capitol Hill and as a state legislator. As a staffer, she helped pen a water agreement in the Pacific Northwest’s Yakima basin that many experts consider among the most successful in the country at balancing agricultural water needs with environmental and endangered species protections for fish.

More recently, Stansbury initially secured $200 million in climate resilience funding for New Mexico Pueblos whose water infrastructure is in significant need of upgrades, though the funding was later dropped from the budget reconciliation bill.

Along the way, the Democrat has racked up awards, including one from the U.S. Water Alliance this year as the group’s "Outstanding Public Official."

A former colleague who worked with Stansbury during a stint at the Office of Management and Budget said that Stansbury’s work, particularly on Native American water rights and settlements, was top-notch.

"She knows what she is talking about, and she will fight for what’s right. And that’s the leadership we need as the country grapples with how to address the climate crisis," said Anna Naimark, who is now a tribal negotiations adviser to California Gov. Gavin Newsom (D). "She’s the real deal."

In a Zoom interview, Stansbury said water has been her "lifelong passion" and said that now is the moment for major change.

"We have to radically rethink the way we manage water in the West," she said. "The challenges are massive. What we need is sustained leadership and a science-based approach that will take time in the coming years to really craft the solutions that will help the country adapt."

Stansbury was raised in Albuquerque, N.M., and noted that water issues have been a common thread in her life since childhood.

While studying for a doctorate of sociology at Cornell University, Stansbury returned to New Mexico and focused her research on tribal water rights.

"I got really interested in the politics and history, policy around water and the need to really rewrite the rules so we address our water challenges," she said, referencing how water policies can, and in some instances have, perpetuated inequities, particularly for Native American people.

Social justice and water policy is an issue that is getting more and more attention as the Colorado River’s basin states, including New Mexico, negotiate operating guidelines for the waterway. When the last rules were negotiated and finalized in 2007, the basin’s 30 tribes were shut out of those talks (Greenwire, Nov. 3).

Stansbury said studying Pueblo irrigation practices gave her a deeper appreciation for water — and the many ways policy affects it.

Her first job after college was at the New Mexico Museum of Natural History and Science. She taught children the ecology of river systems and showed them how to take water quality samples.

Washington soon beckoned. She became a White House fellow and worked as a policy adviser on the Council on Environmental Quality. When President Obama took office, she become a program examiner at the Office of Management and Budget.

It was there that she crossed paths with Naimark, who considers Stansbury a mentor. Stansbury always pushed for science-based approaches on issues like Native American water rights settlements, Naimark said, while combining them with an understanding of the on-the-ground, human impacts.

"She never forgets the people on the other end of the decision," Naimark said.

She returned home to New Mexico, where in 2018 she beat out a seven-term Republican incumbent to win a seat in the state House of Representatives. She won reelection in 2020, and when Biden picked Haaland for Interior secretary, she jumped into the special election for her seat last June (E&E Daily, June 8).

Haaland, the first Native American Interior secretary, was beloved by tribes in New Mexico’s 1st District. Stansbury has won praise for her outreach and dedication.

"She picked up right where Secretary Haaland left off," said Sandia Pueblo Tribe Gov. Stuart Paisano. "But Congresswoman Stansbury, because of her work in water, has been more aggressive in working on it."

"We are still using a very analog system with regard to water," Stansbury said, referring to dam, canal and aqueduct management that was largely developed a half century ago. "In order to manage a system at scale, you really need the kinds of tools that big data and technology enable."

She knows that the task ahead is challenging, especially as the Colorado Basin endures a more than two-decade-long megadrought that shows no signs of easing. Stansbury, a trail runner, says she is up to the challenge.

"One of the biggest challenges with Western water issues is their complexity," she said. "The challenges are massive. What we need is sustained leadership and science-based approaches that will take time in the coming years to really craft."

Naimark looks forward to seeing what her former mentor accomplishes.

"She has the substantive knowledge, the policy and legislative skills, and most importantly the heart," Naimark said. "She’s the person I want in Congress working on this."