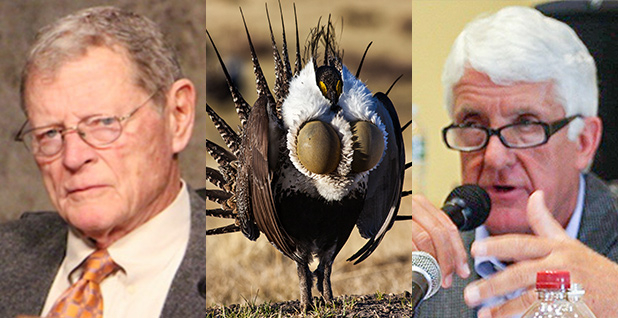 The legislators tasked with crafting a final National Defense Authorization Act met for the first time Wednesday to start the process of reconciling House and Senate versions of the bill.

Some provisions are bound to be deeply controversial. The House bill includes riders related to sage grouse protections and environmental permitting, and both have drawn criticism from environmentalists.

The sage grouse provision from House Natural Resources Chairman Rob Bishop (R-Utah), who is also on the NDAA conference committee, would prevent the greater sage grouse and lesser prairie chicken from being listed under the Endangered Species Act for the next 10 years.

His previous efforts to pass similar legislation haven’t worked, but the change in leadership could create an opportunity for the language to make it to the final NDAA (E&E Daily, May 21).

The House and Senate alternate chairmanship of the NDAA conference committee each year. This year, the gavel has been passed to the Senate.

And Sen. Jim Inhofe (R-Okla.) is leading the negotiations in the absence of Senate Armed Services Chairman John McCain (R-Ariz.), who is battling brain cancer.

Iraq War veteran Garett Reppenhagen, Rocky Mountain director with the Vet Voice Foundation, recently traveled from Colorado to Capitol Hill to speak out about his opposition to environmental riders in defense legislation.

"When things like the defense bill that’s supposed to be used for the training and the equipment that our troops need overseas becomes a vehicle to try to move these amendments that basically help destroy the public lands that I love, it becomes pretty offensive," he told E&E News.

He disagrees with Bishop on whether grouse and resource measures are germane in a defense bill. Still, the chairman and his allies have for years said resource rules affect the military.

The environmental permitting provision for so-called critical minerals, by Rep. Mark Amodei (R-Nev.), may generate even more controversy this time around. It would significantly reform and accelerate the National Environmental Policy Act review process for mines (E&E Daily, June 19).

"Without minerals like beryllium, copper and nickel, our troops wouldn’t have fighter jets, body armor and advanced imaging technologies," National Mining Association President and CEO Hal Quinn said in a statement. "But the onerous mine permitting process in the U.S. has made us increasingly import-reliant, forcing us to look abroad for the minerals we already have here at home."

Aaron Mintzes, senior policy council for the nonprofit Earthworks, opposes Amodei’s provision as well as several others, including a land exchange with a mining company that is detailed in the Senate version of the bill.

"We would like to see the conference committee remove the anti-environmental provisions and pass a clean bill, as the tradition has been for a long time," Mintzes said.

Others on the conference committee include Sen. Jack Reed (D-R.I.) and Reps. Mac Thornberry (R-Texas) and Adam Smith (D-Wash.) — all leaders of armed services panels in the Senate and House.