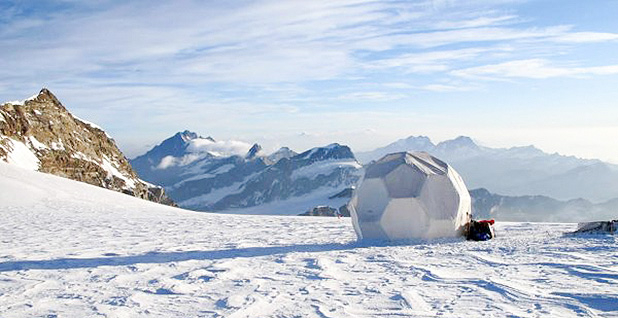 A new study of ice core data and historical records concludes that lead production has been fouling the air much longer than thought. Harvard University/University of Maine

A study released yesterday and awaiting publication in the journal GeoHealth concludes that lead production has been fouling Europe’s atmosphere for two millenniums.

The one exception: a four-year period in the mid-14th century when the plague known as the Black Death ravaged the continent’s population and economy, according to the interdisciplinary research team, which included Harvard University historians and climate scientists from the University of Maine.

"Our findings are in sharp contrast with a consensus among policy makers and industry experts that ascribes a significant portion of pre-industrial atmospheric lead levels" to volcanoes and other natural sources, they wrote.

The ice core’s location is relatively close to Western European mining and smelting centers, the study said. While long-range transport is needed for heavy lead particles to be trapped in polar ice, the proximity of potential sources in this case offers "a more precise, definitive, continuous and regional specific signal," it added.

Researchers also found several smaller declines in lead levels over the centuries. One occurred during an economic downturn in 1885, with another following in recent decades with the phaseout of leaded gasoline.

Lead is a neurotoxin, with even low-level exposure capable of affecting babies’ behavior and intelligence, according to the Centers for Disease Control and Prevention. While the agency has not identified any safe blood threshold for children, U.S. EPA’s current air quality standard for lead, set in 2008, is 0.15 microgram per cubic meter of air (Greenwire, Oct. 18, 2016).

The naturally occurring level of atmospheric lead is "essentially zero," according to a news release summarizing the new study’s conclusions.

The findings underscore the need to explore the connection between atmospheric lead pollution and such factors as ecosystem health and human fertility, intelligence and behavior, the authors wrote, adding that policies assuming that current atmospheric lead levels contain a significant "natural" contribution are "clearly misleading."

GeoHealth is a journal of the American Geophysical Union. The research team also included participants from Heidelberg University in Germany and the University of Nottingham in England.