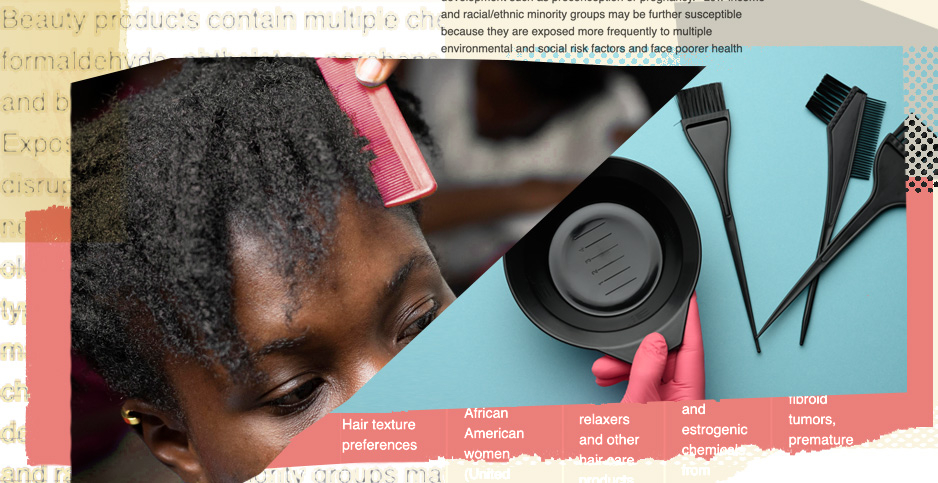 Toxic chemicals in beauty products commonly used by and marketed to Black people and other people of color could be contributing to racial health inequities.

So say researchers and community groups studying chemicals in consumer goods, arguing that the term "environmental justice," which has gained prominence in recent years to describe how communities of color bear larger pollution burdens, should be expanded to include exposure from toxic beauty products.

Just as communities of color often are located in more polluted areas due to discriminatory zoning and housing policies, centuries of racist and sexist beauty standards favoring straight hair, for example, have pushed Black women and feminine people, in particular, to use products containing harsh chemicals that could harm their health.

That includes certain hair straightening and relaxing treatments like hot oil, polish, hair lotion and root stimulator marketed to Black people. A 2008 dissertation submitted by epidemiologist Tamarra James-Todd for her Columbia University doctoral degree reported that Black people use such products more than white people and that the products contain harmful chemicals like phthalates and parabens, both of which have been linked to diseases like uterine fibroids and breast cancer.

Those connections should be part of the discussion about toxic exposures and racial health disparities, said Ami Zota, a researcher at George Washington University’s Milken School of Public Health.

"We want to marry the more traditional, place-based environmental justice framework with this well-documented body of evidence on endocrine-disrupting chemicals in beauty products marketed to women of color," she said.

Though use of these products alone cannot be linked to increased illnesses among Black people — who often face additional risk factors like stress, lack of access to health insurance and care, and other sources of pollution — researchers like Zota argue that chemical exposures from personal care products should be considered as doctors examine racial health disparities.

Three years ago, she co-authored a paper in the American Journal of Obstetrics & Gynecology about "the environmental injustice of beauty" noting that just as racist policies like redlining contribute to higher pollution burdens in neighborhoods of color, systemic racism also contributes to beauty standards that lead Black women and feminine people of color to potentially harmful personal care products.

One study, published last year in the journal Environment International, examined women and children’s urine for phthalate and paraben metabolites, substances formed as bodies process chemicals that have their own unique signature.

The exposures were higher among Black people in the study even when the authors controlled for socioeconomic status, leading them to hypothesize that the disparities could be caused by the types of beauty products more commonly used by people of color than by white people. The study’s results, the authors wrote, "are consistent with a personal care product route of exposure," noting that parabens and phthalates are used as preservatives and fragrances in hair products used by Black people.

Such elevated paraben levels among Black children are particularly concerning, the authors wrote, because early-life paraben exposure is known to alter mammary gland development. Phthalate exposure has been linked to breast cancer, and use of hair relaxers more broadly has also been identified as a potential risk factor for breast cancer among Black people, though there is not yet enough evidence to definitively say that use of such products causes cancer.

It is no accident that Black women are more likely to use straightening products, Zota said, because societal beauty standards — and even local, corporate and federal policies — favor straight hair. Until 2014, for example, women of color in the Army were not allowed to wear their hair in natural Black hairstyles, like braids and twists.

"There is hair discrimination in schools where Black children are told they can’t wear natural braided or dreadlock styles," she said. "There are real pressures."

Black people, she said, have "spent a lot of dollars to assimilate, and with that comes the toxics within these products."

"People are faced with the decision of use these products to assimilate or be met with resistance at work if you want to wear your hair in a more natural form that might prevent exposure to these toxins," she said. "We are dying at the cause of beauty, and that is something that needs to be addressed."

Toxic chemicals are found in all sorts of beauty products, not just those marketed to people of color. Phthalates and parabens are also commonly used in shampoos and body lotions to help dissolve other ingredients, act as preservatives and deliver fragrances. Recent research has also found high fluorine content — signaling the probable presence of per- and polyfluoroalkyl substances — frequently in waterproof mascara, liquid lipstick and foundations.

While anyone, regardless of race, who uses these products could be exposed to the chemicals, people of color who use additional products to straighten or relax their hair are being more exposed through such treatments than white people who do not use them.

"The trend tends to be that hair products marketed to women of color or used more by them tend to contain more harmful chemicals, and if they are using those products in addition to lotions or other products containing these chemicals that all women use, Black women are facing an extra burden," said Environmental Defense Fund’s Alissa Sasso, who runs the group’s "clean beauty" campaign aimed at ridding beauty products of toxic chemicals.

It’s not just hair products. Other research has shown similarly harmful chemicals present in skin lightening creams and vaginal douching products marketed to people of color. And Zota’s research, published in Environmental Health in 2015, has similarly linked higher levels of phthalate metabolites in Black women’s urine compared to white women to their use of feminine hygiene products, leading her to believe that "vaginal douching may increase exposure to [phthalates] and contribute to racial/ethnic disparities in [phthalate] exposure."

The Personal Care Products Council, whose members represent 90% of the U.S. beauty industry, said in a statement that use of parabens and phthalates in beauty products is safe and that they "are used across product types and their usage is not specific to cosmetics and personal care products marketed towards women of color."

Indeed, the Food and Drug Administration does not regulate use of either chemical in cosmetics, writing on its website in 2020 that "we do not have information showing that parabens as they are used in cosmetics have an effect on human health."

But critics note that FDA is often slow to act on toxic exposures.

This month, salon workers along with two environmental groups petitioned the agency to ban formaldehyde in hair straightening products like Brazilian Blowout because the chemical is a known carcinogen and has acute impacts on salon workers and clients’ respiratory systems (Greenwire, June 15). The petition notes that FDA has failed to act even as states like California and Maryland move to ban the products.

Indeed, Williams’ group has worked with researchers conducting studies looking at endocrine-disrupting chemicals in personal care products used by Black and Hispanic people compared to those used by whites. In a 2018 study published in Environmental Research, they found chemicals banned by the European Union or regulated by California in many of them — including five such chemicals in products specifically marketed to children.

"It raises a lot of questions of if Black women are uniquely exposed, or disproportionately exposed, to chemicals that impact their hormones through these products and how that impacts existing health disparities, because we know that Black women have a greater burden of hormonal problems," said author Robin Dodson, a research scientist with the Silent Spring Institute.

Another project, supported by Black Women for Wellness and conducted by the Silent Spring Institute and researchers at Occidental College, found that women of color, generally, use a higher number of personal care products than white women, with Black women reporting higher numbers of hair and menstrual products, while Hispanic and Asian women use more cosmetics than white women.

The same researchers are now working with groups of Hispanic and Black women in Los Angeles to track which chemical markers show up in their urine from the variety of personal care products they use.

Bhavna Shamasunder, a lead researcher on that project, said the work shows why personal care products should be part of the conversation around environmental justice.

"There is real reason to suspect that these consumer products are linked to the exposures that women of color face," she said. "There is a lot of work in the environmental justice literature on the cumulative burden of pollution, and these products need to be considered in that."

Shamasunder says the research points to the need for better regulation of chemicals in all personal care products to help protect consumers.

"There is such a gap between what medical doctors think is safe and what is available for purchase, and that gap is an important one," she said. "I want to know why we can even buy certain products."

Alexandra Scranton, director of science and research at Women’s Voices for the Earth, agreed.

"We see health disparities between women of color and white women, and some of it is lack of access to health care or health insurance, and some of it is stress and pollution in the neighborhood, and all of these things are compounding," she said. "It’s hard to tease out what one thing might be causing these disparities, but we can control toxic exposures, and manufacturers and regulators should be doing their part to reduce that."