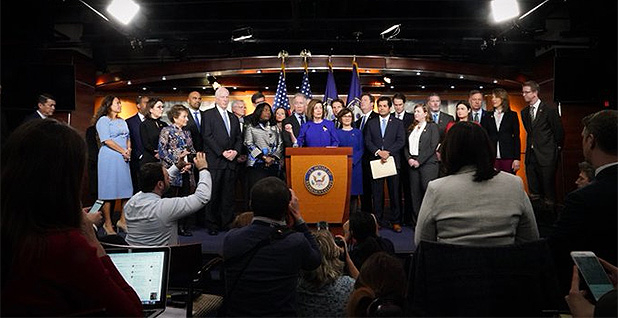 A concession won by House Democrats in negotiations over the United States-Mexico-Canada Agreement (USMCA) could help pave the way for a North American crackdown on the powerful class of heat-trapping chemicals known as hydrofluorocarbons (HFCs).

However, while Democratic negotiators intended to open the door for phasing down HFCs in the sweeping trade deal, whether that goal is achieved will depend on the specific language of the USMCA implementing legislation that has not yet been released, according to a Democratic staffer.

"We’re still reviewing the text," the aide told E&E News today. "What we know is that this was an active part of negotiations in the context of the USMCA broader negotiation."

Few specifics of the USMCA have been made public, but a House Ways and Means Committee memo listing Democratic "wins" in the agreement announced yesterday noted that negotiators "removed language in order to allow the Montreal Protocol to be covered in this agreement."

The Montreal Protocol on Substances That Deplete the Ozone Layer includes the 2016 Kigali Amendment, which aims to phase down the use of HFCs by cutting their production and consumption.

Both Mexico and Canada have ratified Kigali, which is in effect elsewhere in the world but remains in limbo in the United States.

The Obama administration never submitted the agreement to the Senate for ratification, and President Trump has resisted doing so, despite support from some Senate Republicans.

A second Democratic congressional aide said today the language in the USMCA "would not force the United States to ratify Kigali."

"Rather, if the U.S. does ratify Kigali, Kigali will be covered by the obligations in the agreement," the aide said in an email.

There is growing bipartisan support on Capitol Hill for legislation that would sidestep the debate over submitting Kigali to the Senate for ratification.

That bill aims to provide EPA with authority to regulate HFCs after the U.S. Court of Appeals for the District of Columbia Circuit in 2018 tossed Obama-era regulations intended to phase down the chemicals (Greenwire, Oct. 9).

The legislative fix, S. 2754, by Sens. Tom Carper (D-Del.) and John Kennedy (R-La.), would provide EPA with the necessary authorities to phase down HFCs.

GOP support for phasing out HFCs is in part tied to a domestic economic boom expected from implementing Kigali that would benefit U.S. manufacturers of alternative refrigeration products.

The removal of the Montreal Protocol language from an earlier version of the USMCA was part of a broader effort by Democratic negotiators to enhance the enforceability of existing multilateral environmental agreements in the North American trade deal.

That push was ultimately successful, according to the memo released yesterday, which says the deal now includes commitments that all parties "will adopt, implement, and maintain seven multilateral environment agreements (MEAs), and additional language that allows all parties to agree to add to the list of covered MEAs."

At the same time, however, Democrats hoped to create an opening to achieve the goals of the Carper-Kennedy HFC bill and the Kigali Amendment.

"Democratic negotiators were actively pursuing that goal in the context of negotiations," the staffer said.

In addition to the uncertainty over whether the existing text of the USMCA implementing legislation allows the U.S. to crack down on HFCs, it’s also unclear whether efforts to amend the text through a committee markup, floor amendment or enrolling amendment will be allowed.

"That’s been an open discussion," said the aide.

Should the USMCA lead to a phase-down of superpolluting HFCs, it could help draw additional support for the deal when it comes to the House floor, which is expected to be next week.

Environmentalists and some Democrats have expressed disappointment that the USMCA does not do more to address climate change, despite the environmental wins secured by House Democrats in negotiations with the Trump administration (E&E Daily, Dec. 11).

Carper told E&E News today that he regularly roams the Senate floor during multiple vote series to drum up support for the bill, which currently has 27 sponsors from members of both parties.

"Our legislation, I’m told, is worth a half-degrees Celsius in reduction of planet temperature by the end of the century, which doesn’t sound like a lot, but it is," he said.