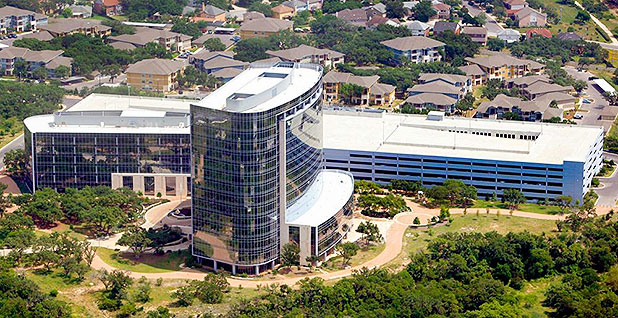 EPA granted Andeavor a renewable fuel standard waiver. The company, whose headquarters are shown here, is based in San Antonio. Andeavor/Glassdoor

The Advanced Biofuels Association yesterday filed a petition in the U.S. Court of Appeals for the District of Columbia Circuit seeking review of the agency’s waivers for more than two dozen small refineries.

"We have seen reports that the number of small refinery exemptions recently granted for compliance years 2016 and 2017 have doubled compared to previous years," Michael McAdams, president of ABFA, said in a statement. "ABFA members are concerned that Administrator [Scott] Pruitt is granting these exemptions in an arbitrary and capricious manner to undisclosed parties behind closed doors with no accountability for its decision-making process."

Under the renewable fuel standard and in coordination with the Energy Department, EPA can grant waivers exempting small refiners that demonstrate economic hardship from meeting biofuel-blending targets. Refiners can also meet the yearly biofuel mandates by buying renewable fuel credits.

EPA has said it has granted exemptions for around 25 refineries. The agency, though, hasn’t disclosed which refineries receive waivers because it says doing so would reveal private business information (Greenwire, April 5).

Reuters, however, has reported that EPA granted waivers to three small refineries owned by Andeavor, which is among the nation’s biggest refiners.

Earlier this week, the news agency reported that EPA also exempted an oil refinery owned by billionaire Carl Icahn, a former adviser to President Trump. The Justice Department is investigating whether Icahn improperly influenced ethanol policy while he served as an adviser.

In its suit, ABFA argues that an arbitrary change in EPA’s criteria for determining economic hardship accounts for the large number of exemptions last year.

Scott Segal, an attorney at Bracewell LLP representing refiners, said that the small refinery exemption is "well established" and that the suit is based on a "fundamental misunderstanding."

"EPA’s current actions are fully consistent with the Clean Air Act," he said.

The new lawsuit comes as the D.C. Circuit is hearing litigation over EPA’s 2017 renewable fuel targets. Several refining companies, as well as the American Fuel & Petrochemical Manufacturers trade association, have challenged EPA’s methodologies and the agency’s decision to not reconsider changing which parties must comply with the renewable fuel standard. The National Biodiesel Board, on the other hand, is challenging EPA’s target for biodiesel, an advanced biofuel made from soybean oil, animal fats and used cooking grease. Final briefs are due in June.

Outside of the courtroom, corn-state senators have urged EPA to stop granting the refinery waivers, warning that they would cause corn prices to drop and hurt farmers (Greenwire, April 17).