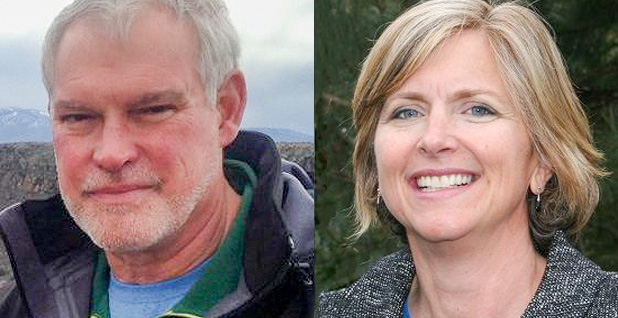 The Bureau of Land Management is reshuffling more staff after the June transfer of three state directors, including Bud Cribley in Alaska and Amy Lueders in New Mexico. Cribley/LinkedIn;BLM/Facebook (Lueders)

The Bureau of Land Management has temporarily reassigned three more top administrators as part of an ongoing reorganization effort that began in June with the removal of three BLM state directors, according to an internal email obtained by E&E News.

The reassignments are fallout from the Interior Department’s decision two months ago to permanently move Alaska Director Bud Cribley, Colorado Director Ruth Welch and New Mexico Director Amy Lueders out of BLM to positions at the Fish and Wildlife Service and Bureau of Reclamation (Greenwire, June 27).

BLM acting Director Mike Nedd, in an email sent last week to the members of the agency’s executive leadership team, announced that BLM Eastern States Director Karen Mouritsen will temporarily fill in for Cribley as acting state director in Alaska.

Mouritsen is a former petroleum engineer and attorney in the Interior Department’s Solicitor’s Office who has held numerous administrative positions at BLM, including deputy assistant director for energy, minerals and realty management. As acting state director in Alaska, she will oversee 72 million acres of public lands, including the 22.8-million-acre National Petroleum Reserve — the largest contiguous block of federally managed lands in the United States.

Mitch Leverette, the chief of BLM’s Division of Solid Minerals, will temporarily fill in for Mouritsen as acting Eastern States director for up to 120 days, Nedd wrote.

Leverette, a 30-year BLM career employee, will oversee agency-managed lands in the 31 states east of and bordering the Mississippi River. The Eastern States office also manages about 30 million acres of subsurface federal mineral estate that generates more than $100 million a year in new rentals, royalties, fees and bonuses, according to the agency.

Additionally, Aden Seidlitz, currently the associate director of BLM’s New Mexico state office, will temporarily fill in for Lueders as acting state director, Nedd wrote. Seidlitz, who has worked at BLM since 1983, will be in charge of a state office that oversees 13.5 million acres of public lands in New Mexico and parts of Oklahoma, Texas and Kansas.

"As we say ‘so long’ to both Amy and Bud and wish them the best in their new position, please also join me in thanking Aden Seidlitz, Karen Mouritsen and Mitch Leverette for agreeing to step in as Acting State Director for up to the next 120 days," Nedd wrote.

Matthew Allen, a BLM spokesman, said the moves are all part of the transition process. "The BLM continues to place some of our best team members in key positions as we carry out our multiple use mission on behalf of all Americans," he said in an email to E&E News.

Seidlitz, Mouritsen and Leverette are considered "terrific career employees, well liked and respected" at the agency, according to a BLM source who asked not to be identified.

Meanwhile, Nedd’s email provides for the first time details about where Lueders and Cribley are headed after both were notified in June that they were being reassigned to the Fish and Wildlife Service.

Welch was moved to Reclamation in Denver, and she began her new assignment there last month as director of policy and administration. Greg Shoop, a longtime BLM career official, was named acting director of the Colorado office shortly after Welch’s transfer.

Beyond that, BLM and Interior Department officials have declined to provide many details about the June transfers or the ongoing agencywide reorganization effort, to members of Congress and the public.

But Nedd’s email states that Lueders will become director of the FWS Southwest Region based in Albuquerque, N.M. The Region 2 office oversees 47 national wildlife refuges in Arizona, New Mexico, Oklahoma and Texas.

Benjamin Tuggle, whom Lueders is replacing as Region 2 director, was one of the 50 or so SES officials at Interior given transfer notices in June. Tuggle was reassigned to FWS headquarters as assistant director for science applications (E&E News PM, June 16).

Both transfers are effective Sept. 3, according to Nedd’s email.

Lueders and Cribley, like Welch, accepted their transfers in June. But Lueders was allowed to take extended vacation time before moving to the new position next month at FWS. Cribley was given extra time to make arrangements to move his family more than 4,000 miles from Anchorage, Alaska, to Washington, according to sources.

"I have personally come to know and appreciate their passion, commitment and dedicated leadership to carrying out the Bureau’s mission," Nedd wrote of Lueders and Cribley in his email. "Please join me in thanking both Amy and Bud for their very long and distinguished careers with the BLM."

Their transfers are part of an agencywide reorganization effort that is designed to shift federal employees from Washington out into the field, where Interior Secretary Ryan Zinke says they are needed.

Interior is expected to make another round of transfers involving SES employees in the coming weeks.

Zinke reportedly told senior executives with the U.S. Geological Survey at a luncheon last month that the agency plans to eventually move the headquarters for BLM, FWS and Reclamation to Denver (Greenwire, Aug. 15).

Zinke provided an overview of his reorganization plans during a July 21 luncheon, USGS spokesman Dave Ozman confirmed. Zinke also expounded upon his desire to shift more Interior resources and personnel from Washington to field offices across the country and empower front-line employees with more decisionmaking authority, sources said.

But some critics have privately suggested the transfers are politically motivated, and they point to past decisions by Lueders and Welch as conflicting with the Trump administration’s goal of increasing fossil fuels development on federal lands.

For example, Welch, appointed Colorado state director in June 2014, helped broker agreements throwing out already-issued oil and gas leases in the Thompson Divide
portion of the White River National Forest and atop the sensitive Roan Plateau.

Some oil and gas industry groups were critical of those agreements.

A federal review team established by Zinke recommended this month making major changes to those plans, in some cases to ease land-use restrictions that could hamper oil and gas development.

Meanwhile, Zinke has told lawmakers that he wants to reduce the Interior workforce by 4,000 full-time jobs through a mix of attrition, separation incentives and reassignments to meet the recommendations of the Trump administration’s fiscal 2018 budget request.

Nedd told members of BLM’s executive leadership team during a June teleconference that they should expect "one or two more rounds" of transfers.

Nedd also sent an agencywide email to all BLM staff on June 16 that said the administration’s proposed fiscal 2018 budget for BLM — which calls for a nearly 13 percent cut in funding from current operating levels — "could mean 1,000 fewer full-time equivalent employees across the Nation," according to a copy of the email obtained by Public Employees for Environmental Responsibility.

Nedd’s June email said the agency can probably handle most of the reduction through attrition and retirements but added that BLM "may also seek authority from the Office of Personnel Management to offer early retirement and voluntary separation incentives later this year."

In his latest email to the leadership team last week, Nedd wrote that he was providing them with the "updates" in an effort to "strengthen communications, especially during this period of transition."

"Thank you all for the work you do, day in and day out, managing America’s public lands on behalf of all Americans," he wrote. "We are ‘BLM Strong’ and working together we are making a difference!"