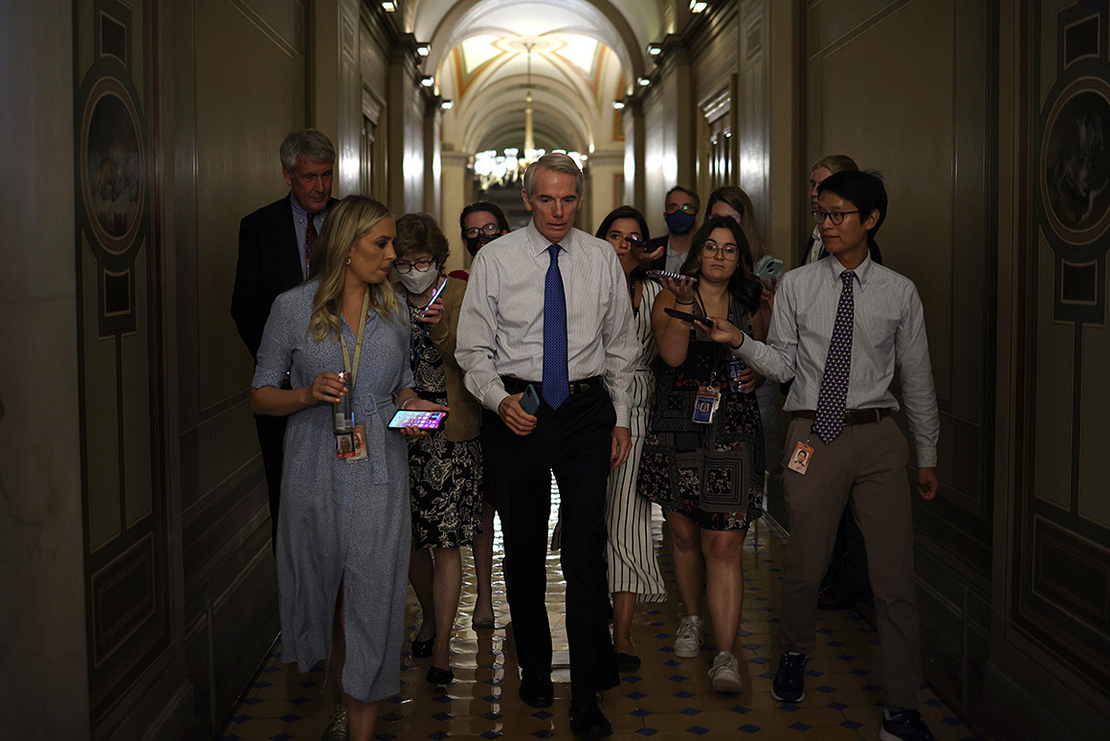 Senators from both parties said this weekend they were closing in on a bipartisan legislative deal that could be finalized as early as today — if they could agree on funding for public transit.

An accord would clear the way for Majority Leader Chuck Schumer to call up another test vote after one failed last week (E&E News PM, July 21). The New York Democrat insists he wants to pass the bipartisan framework agreed to by President Biden and 22 senators last month before August recess, along with a budget resolution paving the way for a much larger Democrats-only plan through the process of reconciliation.

Funding for transit remains an obstacle in the bipartisan negotiations, Sen. Rob Portman (R-Ohio) said yesterday. “We’re about 90% of the way there,” Portman said on ABC’s “This Week.”

Portman said, “We have one issue outstanding, and we’re not getting much response from the Democrats on it. It’s about mass transit. Our transit number is very generous. We increased transit in this proposal. We also increased the formula going forward. That’s the one issue that’s outstanding, frankly, at this point. My hope is that we’ll see progress on that yet today.”

Transit is supposed to receive $48.5 billion under the bipartisan framework, which includes $579 billion in new spending for infrastructure. Schumer has already said the Environment and Public Works-passed highway bill, S. 1953, and the Commerce, Science and Transportation panel’s rail and safety title, S. 2016, will be included in the bipartisan bill.

But Senate Banking Chair Sherrod Brown (D-Ohio) and ranking member Pat Toomey (R-Pa.) have been unable to strike a deal on the transit title of the surface transportation reauthorization push. Brown has said Republicans are unwilling to follow a tradition of splitting highway trust fund dollars 80-20 between roads and bridges and transit.

In an appearance on CNN’s “State of the Union” yesterday, Toomey said Congress usually spends about $13 billion annually on transit, but that COVID-19 relief packages added an additional $70 billion to help struggling transit agencies cope with the pandemic.

“It’s an incredible amount of money, so much that they can’t spend what they have now,” Toomey said. “They have been offered many tens of billions more. And they’re saying that’s not enough. Nobody’s talking about cutting transit.”

The Pennsylvania Republican added: “The question is, how many tens of billions of dollars on top of the huge increase that they have already gotten is sufficient? And that’s where there is a little disagreement.”

Both Brown and EPW Chair Tom Carper (D-Del.) said last week they will not break the long-standing formula that has traditionally governed transit spending in highway bills.

"Highway and transit programs are always reauthorized together, and we will not break precedent this year,” the pair said in a joint statement Thursday. “Robust funding for transit must be included in the legislation. We will not support any package that neglects this fundamental part of our nation’s infrastructure.”

Sen. Chris Coons (D-Del.) said Friday that he would support the package even if public transportation was omitted. “Frankly, because we are also going to be moving a large reconciliation bill, there will be a second opportunity for us later this year to invest in transit,” he said.

Other sticking points before the weekend included a $15 billion funding shortfall for the $35 billion water infrastructure bill, S. 914, that passed the Senate in April, with Carper and others threatening to withhold support for the bipartisan package unless it’s fixed (E&E Daily, July 23).

The bipartisan talks have also struggled with pay-fors, although Sen. Mark Warner (D-Va.) signaled yesterday that that financing would not be an impediment to a deal by today. “We’re down to the last couple of items, and I think you’re going to see a bill Monday afternoon,” Warner said on “Fox News Sunday.”

In addition to the EPW and Commerce portions of the surface transportation bill, the bipartisan deal will also include the energy infrastructure package that passed the Energy and Natural Resources Committee earlier this month (E&E Daily, July 15).

That bill was endorsed by the American Petroleum Institute (API) last week, with the industry group praising the inclusion of provisions to address carbon capture and sequestration, hydrogen research and development, and orphan well remediation.

In a letter to Energy and Natural Resources Chair Joe Manchin (D-W.Va.), API said the measure aligns with its own climate policies, “including the acceleration of technology and innovation to reduce emissions while meeting growing energy needs, further mitigation of methane emissions to advance environmental progress, and advancement of cleaner fuels to provide lower-carbon choices for consumers.”

In a rare display of bipartisanship, 13 senators from both parties last week urged Senate leaders to include funding for the Energy Department’s national laboratories as the chamber debates infastructure.

“Funding for maintenance, repairs, and the modernization of National Lab infrastructure will ensure our nation’s continued scientific and economic competitiveness; create thousands of high-quality, well-paying construction jobs; and attract the best and brightest scientists to national service,” wrote the group, which includes Sens. Ben Ray Luján (D-N.M.) and Manchin, as well as both of Idaho’s GOP senators, Mike Crapo and Jim Risch.

Speaker Nancy Pelosi (D-Calif.) reiterated yesterday that the House won’t act on the Senate’s bipartisan package until it also passes the $3.5 trillion fiscal 2022 budget resolution, which will unlock the budget reconciliation process that Democrats are hoping will allow them to pass the rest of Biden’s infrastructure agenda by a simple majority.

Still, Pelosi said she was rooting for the bipartisan talks, citing Biden’s support. “I’m enthusiastic about the fact that they will have a bipartisan bill — I hope that it will be soon,” she said on ABC’s “This Week.”

But patience is running thin among liberals in both chambers for the bipartisan seal to emerge. Rep. Pramila Jayapal (D-Wash.), the chair of the 96-member Congressional Progressive Caucus, said it’s “unacceptable” that the House has waited so long for the Senate to move ahead on a bipartisan deal.

She reiterated the view of many House Democrats that they see moving an infrastructure bill as a necessary step toward adopting a multitrillion-dollar package that will include many of their domestic priorities.

Jayapal said the top three environmental priorities for the CPC are creating a civilian climate corps, adopting a clean energy standard, and ensuring 40% of climate and clean energy investments go to economically disadvantaged communities. “We are thrilled that all three of them are currently in the [reconciliation plan],” she said.

Asked about expected opposition to climate provisions from Manchin — a potential decisive swing vote in the Senate — Jayapal noted House Democrats only hold a thin majority and can’t afford to alienate any progressives.

Sarah Ladislaw, managing director for the U.S. program at RMI, said there is “a lot” of positive stuff in the bipartisan bill, but she said “much more” of what’s needed to truly make a transformation in clean energy requires passing budget reconciliation.

“The bipartisan investment framework [alone] probably doesn’t have enough to really give it that jump-start. I think the two of them together would be more compelling,” said Laidislaw.

“If this first round is successful and people generally feel positive about it, I think you could keep a positive dynamic going for the rest of [Biden’s] first term,” she added.

As negotiators and leaders craft this year’s infrastructure bills, committees continue to hold hearings on where and how to invest the money. The Senate EPW Committee will review funding for Army Corps of Engineers water infrastructure projects.

Many such projects are already being funded through the annual appropriations process, with lawmakers for the first time in a decade able to request earmarks (E&E Daily, July 13).