Transition aide: We’re not ‘quite done’ with executive orders 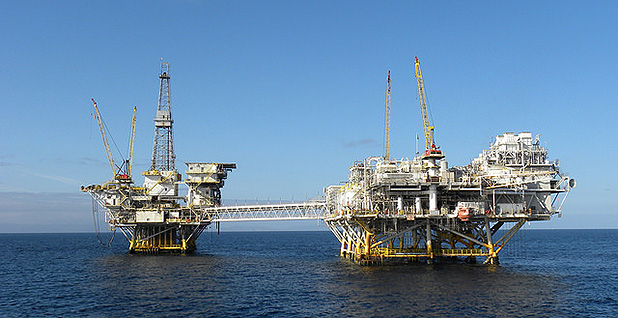 A former Trump transition official yesterday said a new executive order on offshore oil leasing is in the works. Photo courtesy of the Department of the Interior.

President Trump could issue new executive orders related to the environment and energy, according to a former transition official.

Mike McKenna, the former head of the Department of Energy transition team and founder of MWR Strategies, said yesterday that "offshore energy development" and "probably something clarifying where we are going with [the] Antiquities [Act]" are the most likely contenders for action under Trump’s pen.

"I don’t think we’re quite done with the executive orders," said McKenna, speaking at the Energy Bar Association’s annual meeting in Washington.

The well-known energy lobbyist offered few specifics and could not pinpoint a possible release date, but told E&E News, "I expect the administration will ultimately do something on monument designations" (E&E News PM, April 4).

"Presidents, of course, can issue pieces of paper that purport to do almost anything," said Niel Lawrence, a senior attorney and director for the Natural Resources Defense Council’s Alaska program. "But to exercise a specific statutory authority is another thing."

The first is the Bureau of Ocean Energy Management’s five-year oil and gas leasing plan finalized in November. The lease schedule covers the period from 2017 to 2022 and does not offer leases from the Arctic Ocean, in particular offshore acreage in the Beaufort and Chukchi seas. A draft version of the plan also rescinded a proposal by the agency to offer lease sales in the Atlantic Ocean (Greenwire, Nov. 18, 2016).

It would be feasible for Trump to direct Interior Secretary Ryan Zinke to re-examine the five-year plan, said Lawrence. Obama directed BOEM to remove several scheduled lease sales from the calendar during his presidency.

However, if the new administration wants to put the Arctic leases back on the schedule, BOEM will have to redo the lengthy planning process, complete with multiple draft plans, environmental reviews and rounds of public comment, he said.

Republicans and industry groups also expressed outrage in December when Obama decided to withdraw 125 million acres — the entire Chukchi Sea and a "significant portion" of the Beaufort Sea, as well as 31 underwater canyons in the Atlantic — "for a time period without specific expiration." To do so, he used an authority granted under the Outer Continental Shelf Lands Act (OCSLA), the law that governs offshore leasing of the outer continental shelf.

Obama used his authority under Section 12(a) of the law, which gives the president the power to, "from time to time, withdraw from disposition any of the unleased lands of the outer Continental Shelf."

Many environmentalists argue that the law does not give the president express authority to undo a previous president’s use of the law, but the premise has never been tested in court.

Others, including the U.S. Oil & Gas Association, have argued that Obama’s use of the law to place large tracts of the continental shelf off-limits permanently violates the spirit of the 1953 law.

"It can be argued that a permanent withdrawal conflicts with Congress’ stated purpose in creating the Outer Continental Shelf Lands Act to begin with," the group wrote. "The Act provides that the outer continental shelf be ‘available for expeditious and orderly development.’"

‘They clearly want this fight’

Bill Snape, a law professor at American University and senior counsel with the Center for Biological Diversity, said he could envision Trump signing an executive order that attempts to invalidate Obama’s use of Section 12(a) to place the Arctic waters off-limits permanently.

"I could see them directly trying to overturn Obama in an EO," he said. "They clearly want this fight."

Snape said that if that were to happen, his and other environmental groups are prepared to sue. "This Alaska fight very well may end up in the Supreme Court," he added.

It is also unclear how the president could target the Antiquities Act using executive power because he runs into a similar statutory authority issue, said University of Colorado Law School professor Mark Squillace, who has studied the Antiquities Act.

Both the Antiquities Act and OCSLA Section 12(a) set out presidential power that is "one-way designation authority" he said. When Congress wrote both laws, it intentionally didn’t give the president the power to undo actions, but only to take them.

The 1906 Antiquities Act allows presidents and Congress to designate public lands for the protection of cultural, historical or scientific interests. House Natural Resources Chairman Rob Bishop (R-Utah) has expressed dismay with the law and has floated the idea that Trump should undo the recently created Bears Ears National Monument in southeast Utah.

Sen. Lisa Murkowski (R-Alaska) introduced a bill in January that would require all proposed monuments to get House, Senate and state approval before being finalized (E&E Daily, March 30).

Trump could write an executive order requiring any federal agencies that manage national monuments to compile a list of how they could be revised or somehow reduced in size, Squillace said.

Trump could also write an order that rescinds Bears Ears or another monument, but Squillace said the little legal precedent there is on altering monuments calls into question whether the president has the authority to just rescind one he doesn’t like.

Moves to actually reduce monuments significantly would very likely end up challenged in court, he said. Presidents have only previously slightly reduced or redrawn boundaries.

"I think, short of that, if the president just decides he disagrees with Obama about what needs to be protected, it’s clear he doesn’t have that authority," he said.

Congress, he added, clearly has the authority to amend either law.