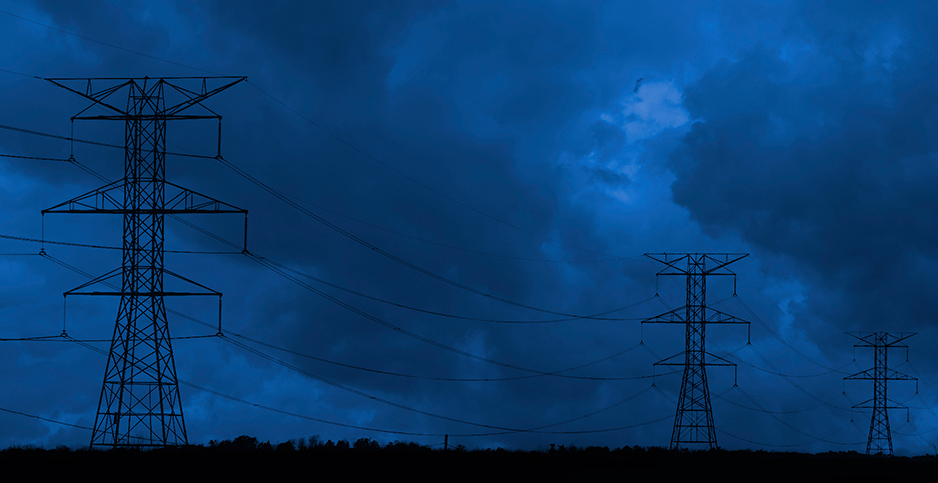 Transmission lines are pictured under a dark, cloudy sky in Rochester, Mich., in this 2015 photo. Chris Clor Blend Images/Newscom

For the first time in a decade, the grid operator for much of the central United States has put forward a long-range transmission road map that calls for tens of billions of dollars in new projects to help states and utilities across the region unlock renewable energy potential and achieve their climate goals.

The plan developed by the Midcontinent Independent System Operator is less ambitious than what would be required under President Biden’s vision for a carbon-free power sector by 2035. But it’s seen by many as a necessary — and, by many accounts, overdue — first step toward a cleaner and more resilient bulk power grid. The process of implementing the plan also underscores the cost and timing challenges associated with reaching carbon-free power.

The road map, which looks at needs over a 20-year horizon, takes into account regional needs and represents the scope of new transmission that will be required to meet the existing energy and climate goals of states and utilities in MISO’s 15-state territory. The approach is a departure from how most new transmission projects within MISO are planned — one that looks first at more localized needs.

Groups pushing for transmission expansion, including renewable energy developers, say they’re encouraged by MISO’s plan. But they also realize it’s a small step in a marathon of a process, with numerous political challenges to overcome.

"I think we’re hopeful it will result in real lines," said Beth Soholt, executive director of the Clean Grid Alliance, a Midwestern clean energy advocacy group. "But we know what a lift it is. Even if things go well, it’s a long slog."

Turning vision into reality doesn’t just take time. It also requires overcoming barriers that have historically delayed or altogether stalled transmission projects. Among those hurdles: how billions of dollars in costs are allocated among MISO members and getting approval from states to site projects.

MISO’s last regional transmission planning effort, which resulted in a group of 17 so-called Multi-Value Projects aimed at helping states achieve their renewable goals, is an indicator of just how long of a process it is.

Discussion of the MVP lines began in 2007 after several Midwestern states adopted renewable energy targets that necessitated new transmission lines. The group of projects was approved by MISO’s board in 2011 and came with plenty of controversy over how project costs were shared.

The last of those new transmission lines — the 102-mile, 345-kilovolt Cardinal-Hickory Creek line from just outside Madison, Wis., to Iowa — has yet to be built a decade later as parties continue to squabble in court over the project’s siting.

Even as the MVPs were being built, states, utilities, cities and companies across the region have continued to adopt increasingly ambitious carbon goals.

Falling prices for wind, solar and battery storage technology; the election of new Democratic governors in Wisconsin, Illinois and Michigan; and, to a greater extent, Biden’s election in November contributed momentum for the transmission road map unveiled last month.

Biden’s $2 trillion infrastructure plan announced earlier this month likewise boosts the momentum for the transition to cleaner energy, although MISO CEO John Bear indicated during a presentation to the Gulf Coast Power Association yesterday that the $100 million set aside in the plan for energy infrastructure isn’t enough.

The plan, he said, is "light on investment dollars for transmission."

By all accounts, a massive investment will be needed just within MISO. Projects contemplated to get MISO to 26% renewables could reach $30 billion.

Besides cost, the timeline that Biden has laid out for achieving a carbon-free grid leaves little time to waste.

Aubrey Johnson, executive director of system planning and competitive transmission at MISO, estimates that 85% of the grid operator’s footprint, an area covering all or part of 15 states and the Canadian province of Manitoba, has some type of clean energy goal.

MISO has no role in determining a state’s energy policy or a utility’s fuel mix.

But like a chef who is handed a random sack of groceries and is expected to cook a meal, MISO’s job is to make everything work together to keep the lights on at the lowest possible cost.

"What we’re trying to do is figure out the road map, the actual transmission, necessary to make that happen," Johnson said in an interview.

‘The future that is in front of us’

The process has already been playing out for a few years with analysis of how the generation fleet in MISO is evolving and challenges that might be encountered as the grid develops from a network of large, centralized fossil fuel power plants to one made up of smaller, intermittent renewable energy sources located in remote areas.

MISO’s long-range transmission plan is based on a series of future scenarios that consider utility long-range plans filed with state regulators as power projects under development that are in the grid operator’s interconnection queue.

The plan is also being informed by an assessment that tries to evaluate the challenges associated with an increasing reliance on renewable energy. MISO concluded in the study that 50% renewable penetration is achievable, but not without technical challenges that additional transmission can help to overcome.

Currently, 13% of MISO’s systemwide energy is generated with renewables, including 26 gigawatts of wind and 1 GW of solar.

MISO’s plan considers renewable penetration reaching 26% to 50% over the next 20 years and various assumptions about increasing electrification of transportation and buildings.

The grid operator’s goal, Johnson said, is to identify projects that provide benefits no matter how the future plays out.

"We want to identify solutions that would satisfy either one of those three options," he said.

Transmission expansion has been a topic of growing interest for developers of renewable energy projects in MISO, especially in the grid operator’s northern states like Iowa and Minnesota.

Grid congestion in that region, especially, threatens to significantly slow or halt renewable expansion because costs for most MISO transmission upgrades are borne by the developer of the wind or solar project.

Sometimes the costs of those transmission upgrades can double the costs of renewable energy projects and make them economically infeasible.

Renewable developers, meanwhile, say it’s critical to build out needed transmission if states and utilities are going to meet the goals they’ve already laid out.

It’s a pivotal moment for the industry when a confluence of forces is helping accelerate the pace of change in a region of the country that has historically been dominated by fossil fuels.

What’s more, developers say events such as the Texas blackouts in February only underscore the need for a more connected, resilient grid. That includes more transmission connecting different parts of MISO as well as interregional projects that connect the regional grid to its neighbors to the east and west.

"We have to build out the transmission system to realize the future that is in front of us," said Nicole Luckey, vice president of regulatory affairs for Invenergy, a Chicago-based energy developer.

As of April 1, more than 83 GW of generation was in MISO’s queue — 54 GW of it from solar and wind projects.

Andrew Witmeier, MISO’s director of resource utilization, said the projects in the interconnection queue closely align with what is reflected in utility integrated resource plans — the long-range plans that utilities file with state regulators to indicate how they’ll meet customer demand.

"The increase in costs associated with generator interconnection that’s caused a lot of units to withdraw from the queue leads to the need for this type of long-range transmission planning," he said.

MISO will continue to do economic modeling and engineering analysis in the coming months with the possibility of advancing an initial tranche of projects to the board for approval in December.

The biggest immediate hurdle will be winning enough support for how the cost of transmission projects can be allocated broadly. Most project costs are shared more locally among utilities.

It’s an issue among some MISO members, particularly in the grid operator’s South region.

Utility regulators in Louisiana and Mississippi and the New Orleans City Council voted against a statement of principles adopted by all other state utility commissions in MISO’s footprint, a swath of the central United States reaching from the Gulf Coast to Canada.

New Orleans Mayor LaToya Cantrell, however, urged MISO in a letter last month to push forward with its long-range transmission plan to better help the city.

"Collaborative long-range planning is the only way to expand transmission in a cost-effective way," the mayor wrote in a letter obtained by the nonprofit Energy and Policy Institute. "Given the lengthy process of transmission planning and development, and the looming threats of additional extreme weather, I am asking that you move as swiftly as possible to incorporate the climate and resilience goals of New Orleans in MISO’s transmission planning process."

More recently, the Mississippi Public Service Commission opened an investigation looking into the costs and benefits of Entergy Mississippi’s long-term membership in MISO.

The PSC cited data from Entergy showing MISO membership saved $233 million for Mississippi customers from 2014 to 2019. But the commission order indicated that regulators have questions about the long-term benefits.

Among the topics the PSC is seeking comments on are "MISO’s evolving transmission planning and cost allocation methodologies; including, but not limited to MISO’s assumptions about future generation resource portfolios and assumed increased demand tied to electrification."

Officials at Entergy declined to be interviewed on the MISO plan.

But Dan Kline, director of transmission planning for the utility, raised questions during yesterday’s Gulf Coast Power Association meeting about how the benefits of a regional transmission expansion program are determined.

Many of the projects contemplated by the plan are unnecessary under classical definitions of reliability as defined by North American Electric Reliability Corp., he said.

Soholt of the Clean Grid Alliance, meanwhile, stressed the need for MISO and its members to push forward, given the long lead time required to plan, get regulatory approvals and site new transmission lines.

"There are pressing time frames involved with getting this infrastructure built," she said. "We need to see the first tranche of projects."