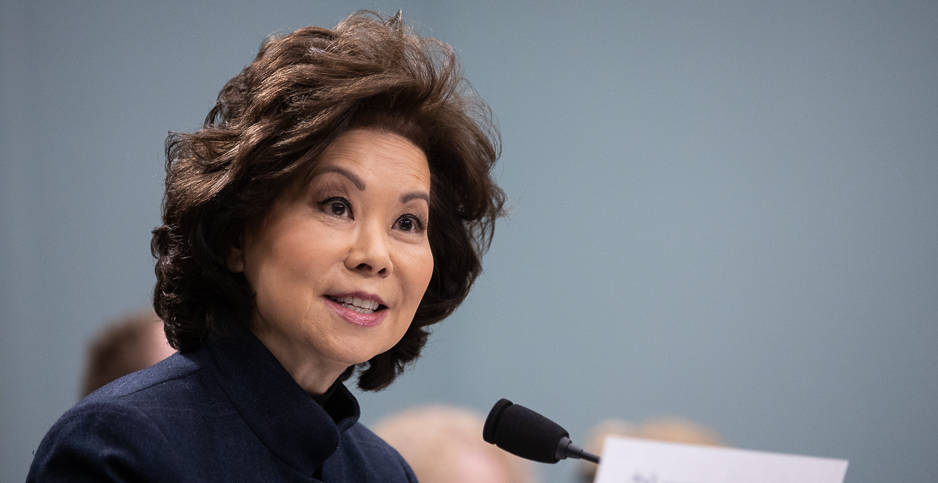 Chao is the first Cabinet secretary to resign over the riot, in which a mob incited by President Trump breached the Capitol to block certification of President-elect Joe Biden’s victory in the election.

"Yesterday, our country experienced a traumatic and entirely avoidable event as supporters of the President stormed the Capitol building following a rally he addressed," Chao wrote in a note to colleagues that she shared on Twitter this afternoon.

"As I’m sure is the case with many of you, it has deeply troubled me in a way that I simply cannot set aside."

Chao said her resignation would take effect Monday, adding that she would help ensure a smooth transition for Pete Buttigieg, whom Biden nominated to lead the Department of Transportation last month.

Chao, who is married to Senate Republican Leader Mitch McConnell of Kentucky, has served as Transportation secretary for the entirety of Trump’s first term.

In that role, she helped oversee Trump’s rollback of the clean car standards established by President Obama.

Unlike other Cabinet secretaries, Chao has kept a low profile, making few public appearances and rarely taking questions from reporters.

In her note to colleagues, Chao expressed pride in her work at the agency.

"I am tremendously proud of the many accomplishments we were able to achieve together for our country and I will never forget the commitment you have for this Department and the United States of America," she wrote.

"I am hopeful that many of you will carry forward our vision to improve the lives of Americans through this Department and beyond."

Buttigieg has articulated a much different vision for DOT, prioritizing climate change and equity.

The former mayor of South Bend, Ind., is also expected to preside over infrastructure negotiations with the new Congress (E&E Daily, Jan. 5).

DOT’s press office didn’t respond to multiple requests for comment, including questions about how Chao was preparing to hand the reins to Buttigieg.