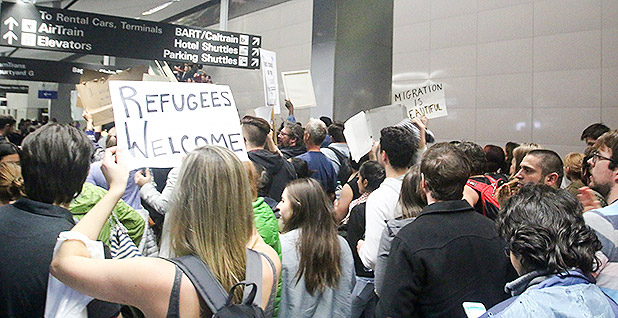 The chaotic White House rollout of a ban on U.S. entry by travelers from seven majority-Muslim countries set in motion a new immigration policy with unclear near-term effects and deeper impacts on the U.S. oil and gas industry and scientific community.

On Friday, the Trump administration issued an executive order stating that "immigrant and nonimmigrant entry" into the United States by travelers from Iran, Iraq, Libya, Syria, Somalia, Sudan and Yemen would be suspended for 90 days pending a policy review, triggering the detention of visitors and U.S. green card holders at airports around the country.

Within hours, the American Civil Liberties Union had secured a partial stay of the order, but by yesterday, both the guiding policy environment and prospects for a broader policy shift out of the White House remained unclear amid a flurry of legal challenges.

The White House over the weekend offered conflicting statements on whether the arrival ban applied to legal residents with green cards, a permit that allows a non-citizen to live and work permanently in the United States.

The executive order means that people working for U.S. companies who hail from one of the named countries cannot leave the country without risking being turned away upon their return. Lawmakers in Iran and Iraq are said to be weighing reciprocal bans that would limit American entrance privileges.

It was not immediately clear how many employees and contractors of U.S. oil and gas companies hail from the affected countries. But Iran, especially, has a long history of sending scientists and engineers to U.S. academic institutions for training. Multinational energy companies working in Iraq’s oil fields participate in personnel exchanges.

At least one employee of a U.S. oil company was apparently caught up in the weekend turmoil, as The Texas Tribune reported that an Iranian engineer who works in the United States for Chevron Corp. was detained for several hours after returning from a visit to Iran to visit a sick family member.

In a statement, the company said, "Chevron is a global company that values the contributions of all employees and partners regardless of their country of origin, religion, race, sexual orientation or gender. We are reviewing the Executive Order to understand any implications for our employees."

One place the ban’s immediate impact could be seen is at the oil and gas industry’s biggest U.S. conference, IHS Markit Ltd.’s CERAWeek, which will take place in Houston in March. The event’s media kit says the event will draw "more than 2,800 delegates from more than 50 countries" to discuss "the most urgent issues and realities to be faced in energy markets, technologies and geopolitics."

Jeff Marn, a spokesman for IHS Markit, which hosts the event, said by email that it was too early to say how the travel ban might limit speakers’ travel to the event.

Contacted yesterday, the American Petroleum Institute declined to discuss how the ban could affect the industry. "We don’t track the kind of information that you’re looking for," spokesman Michael Tadeo said by phone when asked if the group had a position on the ban.

On Friday, an online petition was launched to protest the ban that gathered signatures from prominent academics. By last night, organizers claimed to have more than 9,000 verified signatures from faculty members at U.S. institutions, including 44 Nobel laureates.

The petition says opposition to the ban stems not just from its short-term impacts on scientific work during the three-month evaluation period called for by President Trump, but from concern that it presages a policy change that would bar arrivals from the listed countries on a lasting basis.

"The unrealistic conditions required for discontinuing the suspension make it very likely that this [executive order] will turn into a permanent ban," the petition reads, arguing that the travel ban is discriminatory, is detrimental to the country’s national interests and imposes an undue burden on the scientific community.

Another concern for the industry arises from the possibility that the administration’s list of seven "countries of concern" could grow to include other majority-Muslim countries with which U.S. companies might do more business or have greater personnel exchanges. According to an analysis published online last week by Alex Nowrasteh of the libertarian Cato Institute, Saudi Arabia, the United Arab Emirates and Egypt have all been the home bases of terrorists accused of fatal attacks on U.S. soil since 1975. He found that no fatal U.S. attacks have been carried out by terrorists from the seven newly banned nationalities over that time, though they have been linked with some non-fatal attacks.

"This is like the no-fly list but with far graver consequences," Nowrasteh said in a discussion of the ban. "If President Trump was committed to banning immigrants from certain countries in order to reduce the already small risk of terrorism on U.S. soil committed by the foreign-born then he would not just ban nationals from these seven countries. For this reason, I expect his administration to expand the list of countries banned in the near future."

Saudi Arabia, in particular, has U.S refinery investments, including a 50 percent stake in the largest such facility in North America, the Port Arthur Refinery in Texas, via the state-owned oil and gas company, Saudi Aramco. Up-and-comers in the country’s energy industry have long sought out technical and business training in the West, including in the United States as well as in Europe.

Many critics of the ban have homed in on its failure to include countries with stronger terrorism ties as a reflection of the president’s conflicts of interest stemming from his real estate holdings; the Trump Corp. has current or former business interests in Saudi Arabia, the UAE and Egypt.

"To be clear, this is not a Muslim ban, as the media is falsely reporting," the statement said. "There are over 40 different countries worldwide that are majority Muslim that are not affected by this order. We will again be issuing visas to all countries once we are sure we have reviewed and implemented the most secure policies over the next 90 days."

Trump stressed his "tremendous feelings" for those affected by the humanitarian crisis in Syria. "My first priority will always be to protect and serve our country, but as President I will find ways to help all those who are suffering," he said.