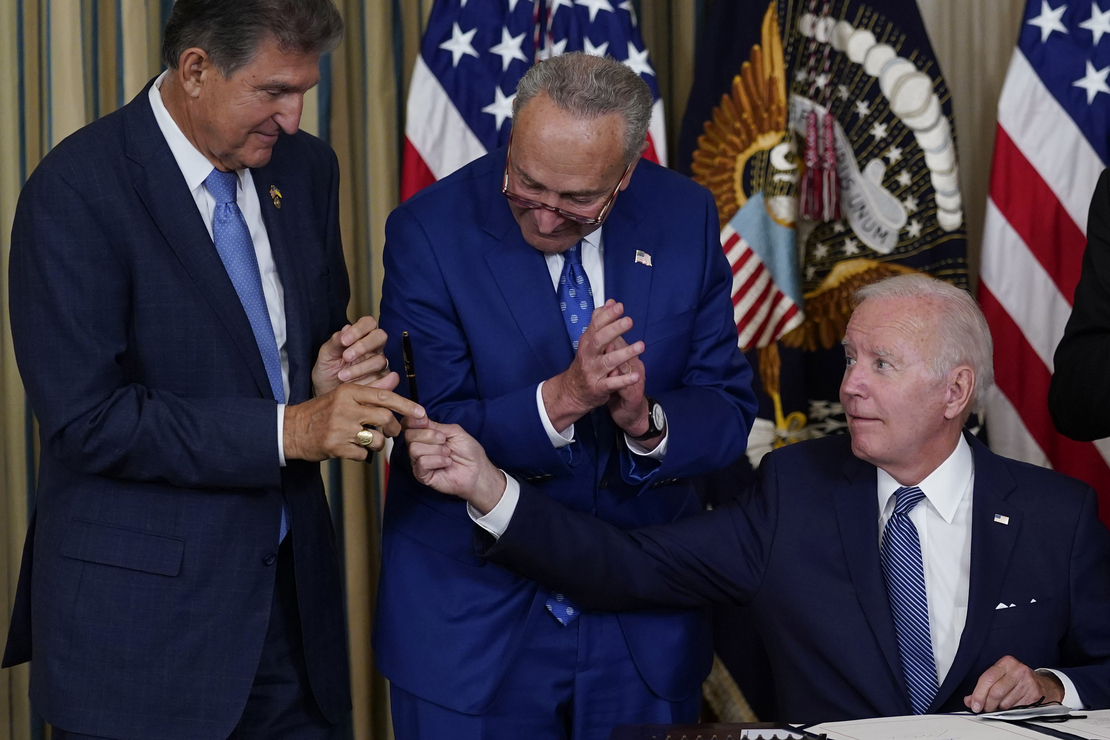 The White House and Joe Manchin are at odds over electric vehicles — again.

The latest tiff comes after the Treasury Department released tax guidance last week spelling out how consumers can qualify for up to $7,500 in federal subsidies to buy a clean vehicle. The guidance effectively provides a loophole for leased vehicles by exempting them from the made-in-America manufacturing requirements needed to receive the full value of the subsidy.

That prompted an angry reaction from Sen. Joe Manchin (D-W.Va.), who said the department was undermining the law’s intent to create a domestic manufacturing base for clean vehicles.

“It only serves to weaken our ability to become a more energy secure nation,” Manchin said in a statement. “It is unthinkable that we still depend on China and Russia for the materials and manufacturing necessary to power our nation in the 21st century and I cannot fathom why the Biden Administration would issue guidelines that would ensure we continue on this path.”

Treasury officials said they were merely following the law as it was written. The Inflation Reduction Act, which contains some $369 billion in clean energy tax credits, has different requirements for personal and commercial vehicles, which include leases. Vehicles bought under Section 30D, which covers new consumer vehicles, must satisfy domestic manufacturing requirements to receive the full value of the credit. But those requirements do not apply to vehicles purchased under Section 45W, which covers commercial and leased vehicles.

“In providing today’s guidance, Treasury is simply following the tax laws and the IRA as written,” Kristin Lynch, a Treasury spokesperson, said in a statement. “The tax laws governing ownership in a lease situation and what is a legitimate business use — and therefore what would fall under the 45W credit for commercial vehicles purchased for use or lease — are longstanding, settled, and clear.”

Manchin and Biden have been at loggerheads over electric vehicles before. Subsidies for clean cars were one of the biggest sticking points during negotiations over the Inflation Reduction Act. In June, Manchin said it would be “stupid” to electrify the country’s vehicle fleet without building domestic supply chains and a manufacturing base to support it (Energywire, June 23, 2022).

His concerns were ultimately reflected in the bill that passed in August. Subsidies for clean vehicles, which include EVs and hydrogen-powered vehicles, are essentially broken into two parts. A consumer can receive $3,500 for a vehicle with a battery made in America and another $3,500 if the critical minerals used in that battery are mined domestically or come from a country with a free trade agreement with the U.S.

The bill also introduced a series of other requirements, like income limits, price caps on qualifying vehicles and a mandate that all vehicles receiving the subsidy are assembled in North America.

The requirements ignited a debate in climate circles. Some advocates argued that the mandates would slow electric vehicle adoption and hamper efforts to curtail emissions from transportation, the largest source of greenhouse gases in America. But others argued that the requirements would accelerate the energy transition by reducing dependence on China for critical minerals used in batteries and by creating jobs and investments in American manufacturing. Those conditions could strengthen political support for climate policies in the long run, they argued.

Early returns suggest the law is spurring domestic investment. Automakers have announced plans to spend at least $40 billion on 15 new battery plants since 2021, up from five between 2018 and 2020, according to an analysis by the Federal Reserve Bank of Dallas.

The manufacturing requirements have been criticized by American allies, who argue it gives preferential treatment to domestic automakers at the expense of their foreign competitors. President Emmanuel Macron of France raised concerns about the provisions during a visit to Washington at the end of last year. South Korea has also lobbied heavily to relax the requirements (Climatewire, Dec. 2, 2022).

Hyundai has been especially vocal. The South Korean automaker has one of the best-selling foreign-made EVs in the U.S., the Ioniq 5. The company recently broke ground on a $5.5 billion EV plant in Georgia. Yet the facility won’t be completed until 2025, meaning its vehicles would not qualify for the new credits until then.

The foreign outcry over the Inflation Reduction Act’s manufacturing requirements served as the backdrop for the Treasury Department as it crafted its guidance for how to apply the EV credits. The guidance released last week provided a series of updates for potential EV buyers.

Vans, SUVs and trucks qualifying for the credit will be capped at a price of $80,000, while sedans will be capped at $55,000. It also establishes an income limit of $300,000 for families and $150,000 for individuals. The guidance notably did not include regulations for batteries and critical minerals. Instead, Treasury released a white paper proposing how those regulations could be phased in over the next two years. The department said it would propose an official rule in March.

That left the leasing provisions as the big ticket item in the guidance released by Treasury. Car dealers would be able to qualify for $7,500 for leased vehicles without meeting the domestic battery and critical mineral requirements.

Manchin had previously warned against such a move in a December letter to Treasury. “If these vehicles are deemed eligible, I can guarantee that companies will focus their attention away from trying to invest in North America,” he wrote (E&E Daily, Dec. 14, 2022). Manchin said he would file legislation in the new Congress to clarify the law’s intent.

Analysts said the disagreement stemmed from the way the law is written.

“This language could potentially open up the credits for consumer leasing depending on Treasury’s interpretation of who can qualify for a lease, which would benefit companies like Hyundai that are asking for it,” said Corey Cantor, an EV analyst at Bloomberg New Energy Finance.

Previous experience shows that dealers tend to pass on EV subsidies to their customers in order to lower the price of vehicles, he said. The bigger question going forward is whether the tax guidance alters foreign automakers’ investment in the U.S., with companies like Hyundai offering more vehicles for lease instead of investing in North American facilities, he said.

“All of this is really tenuous given the kind of lawmaker intent around it, meaning Sen. Manchin in this case,” Cantor said.