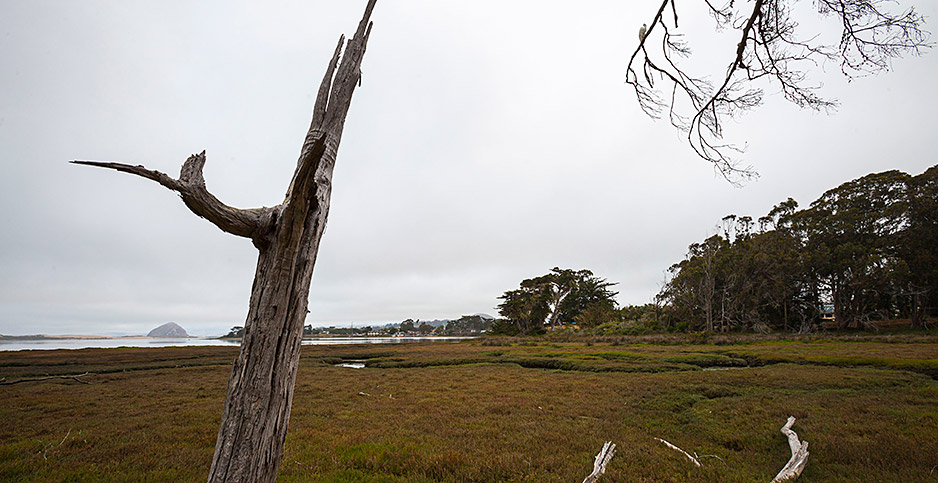 The remains of a dead tree at the Sweet Springs Nature Preserve on Morro Bay in California. Peter Bennett/Citizen of the Planet/Newscom

Trees that were poisoned and killed by saltwater are emitting greenhouses gases known as "tree farts," prompting researchers to warn of a secret warming source that could become worse as rising seas encroach on forests.

Drowned trees in what scientists call "ghost forests" increased the amount of carbon dioxide released by these ecosystems by about 25%, according to a study published last week in Biogeochemistry.

Melinda Martinez, lead author and graduate student at North Carolina State University, said the emissions they measured from dead pine and bald cypress trees, also called snags, in five ghost forests on the Albemarle-Pamlico Peninsula in North Carolina need to be accounted for.

"Even though these standing dead trees are not emitting as much as the soils, they’re still emitting something," she said. "Even the smallest fart counts."

The study reported that carbon dioxide, methane and nitrous oxide from the trees "contribute significantly" to total emissions.

Martinez said the greenhouse gases from snags are important to monitor because ghost forests are spreading along U.S. coasts.

Ghost forests span across the southern U.S. coastline from Louisiana to Maryland. They’re named for their ghostly scenery — pale trunks devoid of leaves or any telltale sign of life.

Although most ghost forests are created by rising sea levels, salty water can also infiltrate forests through canals and ditches used for agricultural purposes.

The effects of mass tree deaths on plant and wildlife can be dramatic. A study published earlier this year in Ecological Applications found that more salt-tolerant shrubs and grasses moved into North Carolina’s ghost forests. That caused a major shift in wildlife and threatened endangered wolf and woodpecker species.

Before conducting the new study, Martinez said some researchers thought the dead trees were acting as straws to suck up greenhouses gases from the soil. When the tree dies, remaining water is flushed out of the leaves, which they thought would allow greenhouse gases to diffuse up the tree.

But their research showed that higher tree stems hold less greenhouse gases than they thought.

She added that they are still unsure how greenhouse gas emissions differ between tree species and how to advise land managers on mitigation efforts. Some researchers have suggested implementing "living shorelines" made from plants and rocks to buffer saltwater surges.

"It’s a hard question to answer because snags can become a new habitat for other animals," Martinez said. "We’re hoping to get a better idea of how greenhouse gases change as the trees are dying and also get better estimates of live tree stem emissions."