Trees as a civil right: ‘All we have is cement and pavement’ 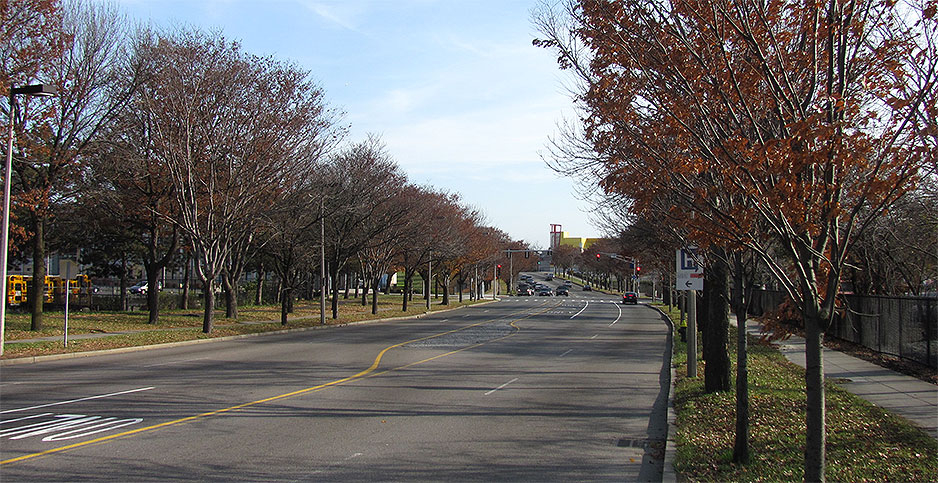 The trees of Boston's Melnea Cass Boulevard, pictured at Washington Street in Roxbury, are the source of an ongoing debate over environmental justice, climate change and urban design. John Phelan/Wikimedia

When Carmen Storms, 69, looks down at the trees of Melnea Cass Boulevard from her eighth-floor apartment, she thinks of her father, Alvin — twice driven from his home during Boston’s urban renewal boom of the 1950s and ’60s, when the city used eminent domain to raze the homes and businesses of Black families.

The only time Storms saw him cry was during the family’s second move, forced out in the name of a highway that never happened. The planned inner belt was stopped by the community it displaced. As a consolation prize, the city of Boston turned the land into a suburban-like boulevard, named it after a local civil rights icon — Melnea Cass — and lined it with 600 trees.

Today, those trees are a lonely green smirk across Roxbury, where past injustices still haunt and heat the historic and political core of Boston’s Black community. The neighborhood, where more than 80% of residents are people of color, is one of Boston’s "heat islands" — made hotter by too much asphalt and too few trees.

Despite recent defense from city officials, the Melnea Cass project is now on hold following neighborhood opposition coupled with pressure from the Massachusetts attorney general’s office.

But Roxbury residents like Storms say they won’t trust anything until they see it in writing. They fear history will repeat itself, with still more systemic racism in a neighborhood that has already endured so much.

"It’s horrifying, so horrifying to uproot something," said Storms, who moved back to this neighborhood as a young woman and stayed for the past 50 years, she said, because of the trees.

‘We will just be heating up’

As the climate changes, Boston is expecting to get steamy. The city’s climate action plan says that by 2050, Boston summers may be as hot as Washington, D.C., today. By 2100, the summers may become comparable to those of today’s Birmingham, Ala.

Roxbury isn’t alone within Massachusetts, where low-income residents are 60% more likely to live in nature-deprived areas, with Black and brown residents roughly six times as likely to be affected as white residents.

That’s also in line with national trends, with research — including a study published earlier this year in the journal Climate — showing that heat islands remain pervasive in areas where people of color were systemically denied government services and access to financial assistance under a practice known as "redlining" intended to maintain racial segregation.

While Roxbury’s tree canopy overall doesn’t fall too far behind the rest of the city, the area surrounding Melnea Cass Boulevard has just 9% tree coverage, compared with 27% on average citywide. That’s according to David Meshoulam, co-founder of Speak for the Trees Boston, which tracks the city’s tree coverage and aims to increase its size and health in communities that have suffered environmental injustice.

Boston’s plans for the boulevard have shifted over the past decade. The city first received $25 million in federal grants for its initial proposal to widen the four-lane road, but later changed course after facing opposition from neighbors who were already concerned about cars speeding down the boulevard as they exit nearby I-93.

"We have to stop in the city thinking about trees as a commodity," he said. "We can’t just willy-nilly cut down trees and say, ‘Oh, we can replace them.’ They are an asset, and we have to plan around them, not through them."

The mayor’s office defended the plan in response to questions from E&E News in late August. But spokeswoman Samantha Ormsby now says city officials, including newly hired Chief of Equity Karilyn Crockett, have been "revisiting the proposal over the last several weeks with a concerted focus on equity impacts to ensure that any proposal maximizes benefit for the community and meets the equitable standard to which we hold ourselves."

Williams said she did not trust the city’s promise to review the plan, noting that when the news first broke in The Boston Globe, it was attributed to an unnamed city official.

The announcement also came just hours after the state attorney general’s office asked the city to reconsider the project in a letter enumerating the ways in which the trees of Melnea Cass Boulevard benefit the health of Roxbury’s community and outlining the discriminatory history of the area.

‘Fighting for the green’

Yvonne Lalyre, who also lives near Melnea Cass, said she doesn’t think the city would have tried a similar project in its whiter, more affluent neighborhoods.

Public records show Boston has held shade tree hearings over Zoom throughout this summer for single trees being removed near Boston’s famed Fenway Park, home of the Red Sox, and along Newbury Street — a posh eight-block commercial area lined by luxury boutiques.

"The city has held tree hearings for individual trees being removed in a lot of whiter, more affluent areas, especially when residents are up in arms," Moran said. "The idea that there are 120 trees that would be removed, and the city is trying to squeeze the project into this exception that doesn’t apply, seems really egregious to me."

As the city reconsiders its plan, many say Boston needs to follow Roxbury residents’ lead.