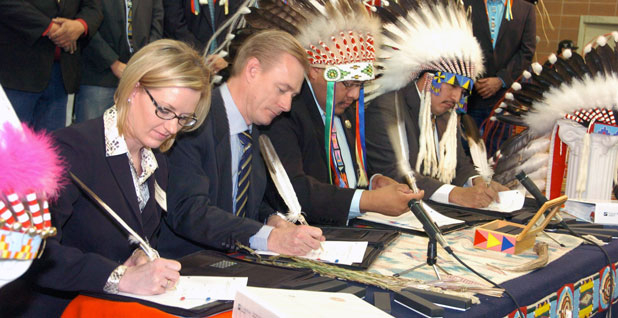 There is black gold beneath the rugged hills of the Northern Cheyenne Indian Reservation in southern Montana: millions of tons of coal that remains untouched.

Despite poverty and unemployment hovering around 45 percent, the Northern Cheyenne have repeatedly said no to developing their coal resources from the time they moved to the Powder River Basin in 1884 until today.

"When we talk about energy development, we believe that it threatens the cultural heritage of what it means to be Northern Cheyenne," said Conrad Fisher, a tribal council member. "It has to do with being environmental stewards of the land and appreciating this beautiful country we call home."

Next door, the 2.2 million-acre Crow Reservation butts up against the western side of Northern Cheyenne land. Since the 1970s, the Crow have received millions of dollars in revenues from the Absaloka mine. Money from the coal operation funds government programs and supplements school budgets. The mine is the largest private employer on the reservation, providing jobs with salaries upward of $50,000 a year.

For the dozen or so tribes whose land sits on coal, oil, gas and uranium, the economic benefits that come from extracting those resources carry the promise of upward mobility. That is particularly important for tribal communities dependent on federal government support, and facing poverty and unemployment rates many times higher than the nation at large.

As the world watches the violence in North Dakota unfold over the fight against the Dakota Access pipeline, one tribe’s fight to protect clean water and ancestral lands is sparking an environmental battle over fossil fuel infrastructure and its implications for climate change. Native leaders note it is the largest gathering of tribes in more than a century.

Indian lands hold an estimated $1.5 trillion in energy resources. That’s almost 30 percent of the nation’s coal reserves west of the Mississippi River, 20 percent of oil and gas reserves, and half of the country’s uranium, according to a 2014 report from the Property and Environment Research Center, a Montana-based think tank.

Some — like the Southern Ute Indian Reservation in southwestern Colorado and Navajo Nation, which occupies portions of northeastern Arizona, southeastern Utah and northwestern New Mexico — have benefited immensely from tapping their mineral resources. Revenues from fossil fuels are both distributed directly to each tribal member in the form of royalty checks and help supplement schools, roads and other tribal needs. In recent years, both chambers of Congress have passed legislation that would cut through some of the federal bureaucracy currently facing tribes in developing their energy resources.

And yet a handful of other tribes like the Northern Cheyenne and dozens in the Pacific Northwest have come out swinging against fossil fuel development. They say not only would fossil fuel extraction jeopardize clean water and other natural resources on which the tribes depend, but that the risk to the climate is too large.

The Lummi Nation is embroiled in a yearslong fight against the proposed Gateway Pacific Coal Terminal near Bellingham, Wash. The tribe’s resistance to the coal terminal flies directly in the face of the position of the Crow Nation, which supports the terminal because it would open up Asian markets for its coal resources.

"For some tribes, fossil fuels have been the one source of income that is relatively stable, and they don’t want to touch it," said Len Necefer, who conducted research on the Navajo Nation about values and beliefs surrounding its own energy development. "It’s self-determination at what cost, and it’s a tough thing even amongst tribes like the Navajo where energy development has had such a formative impact on the reservation."

Coal delivers jobs — but not an end to poverty

Eric Henson, a senior vice president at the economics consulting firm Compass Lexecon and research affiliate with the Harvard Project on American Indian Economic Development, said historical context is important when surveying the energy attitude divide among tribes. Under federal law, tribes are sovereign entities, free to make their own laws and govern themselves. Yet, because of forced tribal relocation onto reservation lands, in nearly all cases tribes depend on the federal government for their survival.

"All people, not just tribes, want clean air and clean water and they want to protect the environment," he said. "For tribes, though, that philosophy outlook often bumps up against the basic human need to have a job."

In recent years, as the coal industry has taken a hit, the Crow have sought to deepen their connection. In 2013, the tribe signed an agreement that gave Cloud Peak Energy LLC the option to exclusively lease up to 1.4 billion tons of coal located under the reservation. In exchange, the company paid the Crow $3.75 million, and if Cloud Peak opts in to exploring the coal reserves, payments could increase to $10 million by 2018.

As the American appetite for coal wanes, operation of the project, Big Metal Coal Co. LLC, is dependent on access to coal markets in Southeast Asia. Cloud Peak and the Crow have also partnered in supporting the Gateway Pacific terminal.

And yet unemployment on the Crow Reservation is three times higher than the national average. Poverty remains a problem. In testimony to the Senate Indian Affairs Committee in April 2015, the head of the Crow Nation, Chairman Darrin Old Coyote, stressed the critical role coal plays for the tribe.

"I simply desire for the Crow Nation to become self-sufficient by developing its own coal resources and to provide basic services for the health, hopes and future of the Crow people," he said.

Brian Cladoosby, chairman of the Swinomish Indian Tribe located an hour north of Seattle and president of the National Congress of American Indians, said economic determination plays deeply into the desire of energy-rich tribes to access their resources. Despite caring about climate change — the Swinomish were the first tribe to write a climate change adaptation plan — he doesn’t criticize those who want to tap into fossil fuels.

"Those tribes that have the opportunity to try and create an opportunity for their people, I don’t hold it against them," he said. "We’re blessed in the Northwest with still having the largest job producer, the fishing industry, but other tribes were put in places where they were thrown away, discarded."

‘Tribes have been hit by a double whammy’

Over the last decade, tribal energy policy has gone through a sea change, with Congress leading the ship.

A 2005 law, an early attempt at giving Native Americans more authority over their energy resources, allowed tribes to enter into leases without approval from the Interior Department. No tribes have taken this step, however, citing the process as confusing and complicated. A new law in 2012 allowed tribes to regulate subsurface leasing. And both the House and Senate have passed bills this session that would streamline tribal energy permitting.

S. 209, passed in December, is the latest iteration of legislation to propose amendments to the leasing process, something Sen. John Barrasso (R-Wyo.) has pushed since 2011. Most recently in the House, Alaska GOP Rep. Don Young’s H.R. 538, or the "Native American Energy Act," which passed the House last year, would give tribes more autonomy in developing their energy resources. It’s a cause House Natural Resources Chairman Rob Bishop (R-Utah) pushed in a field hearing in Santa Fe, N.M., last month (Greenwire, Oct. 5).

Yet, energy development on tribal lands is subject to the same market forces as the rest of the country, which is driving some communities to re-examine their dependence on fossil fuel extraction.

On the Wind River Reservation in central-western Wyoming, oil and gas production has historically been one of the top sources of tribal revenue for both the tribes that share the reservation, the Eastern Shoshone and Northern Arapaho, said Mark Howell, a D.C.-based lobbyist for various Indian tribes.

With the downturn in oil prices and aging well infrastructure on the reservation, both tribes are hurting.

"The tribes have been hit by a double whammy," said Howell, who represents the Northern Arapaho tribe. "You’ve had a drop in oil and gas revenue, but also because of the economy surrounding oil and gas, we’ve seen a lot of non-Indian employees of oil companies that have been laid off and their discretionary income fall, which has caused a significant drop of revenues at gaming facilities."

In an attempt to economically diversify, the Northern Arapaho are conducting feasibility analyses to determine whether solar or wind projects could be installed on the reservation.

And they’re not the only ones. The Moapa Band of Paiute Indians has nearly completed the first utility-scale solar array, 250 megawatts on the tribe’s reservation lands in Nevada, to be approved by the Interior Department.

The federal government has a trust responsibility for all tribes whether they are looking to develop fossil fuels, renewable energy or something else, said Henson, with Compass Lexecon and the Harvard Project on American Indian Economic Development.

"There’s no way to rank them, and both tribes are sovereign nations and have the right to advocate in their best interests, and they’re doing that," he said, referencing the Lummi who are opposing the Washington state coal export facility that the Crow Nation backs. "It just happens here that the interests are at odds. The best thing the feds can do is facilitate the conversation."