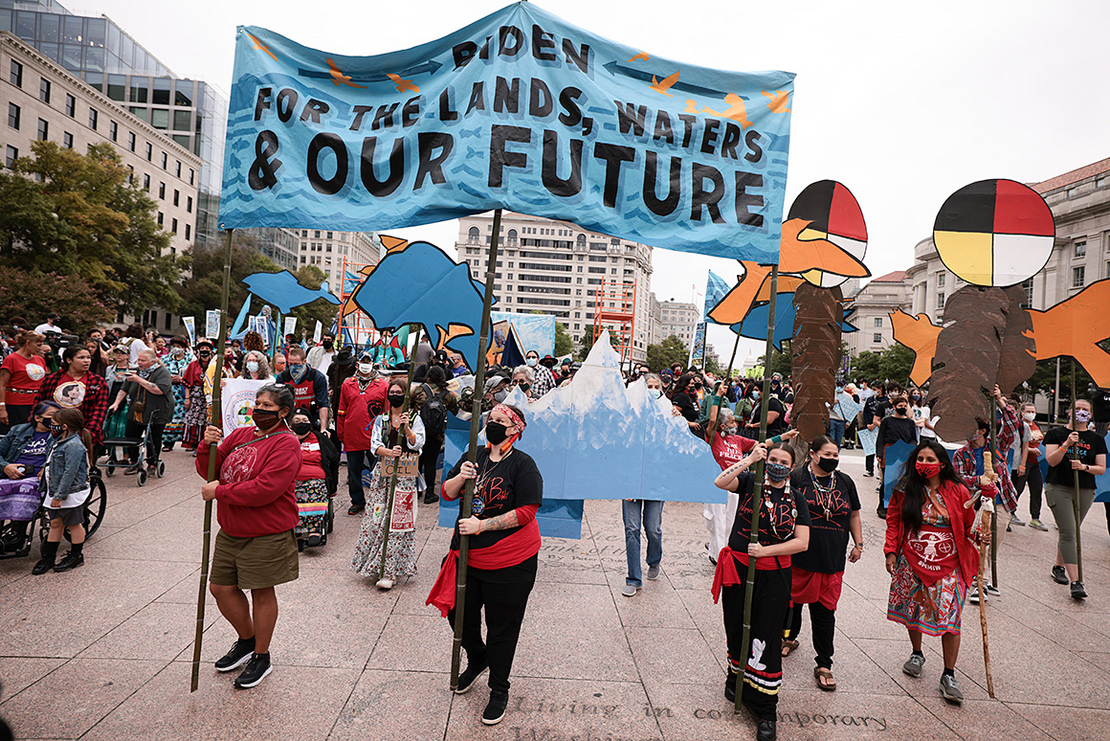 Kevin Washburn, a member of the Chickasaw Nation of Oklahoma, wants Americans to address what he regards as one of the biggest injustices in U.S. history: the theft of land from Indian tribes.

“Return of federal lands may be possible in some instances, but I encourage all of us to think about all of the options on the table — and not just return,” Washburn told the House Natural Resources Committee yesterday.

At the first congressional hearing ever to focus on the dispossession of their land, tribal members endorsed one bold option recommended by Washburn: They said Congress could acknowledge past injustices by giving Native American tribes more power to co-manage public land with federal agencies.

“What could be more restorative than giving tribes the opportunity to participate in the management of lands their ancestors were removed from?” asked Carleton Bowekaty, lieutenant governor of the Pueblo of Zuni in New Mexico.

Washburn, who’s also dean and professor at the University of Iowa College of Law and the former head of the Bureau of Indian Affairs during the Obama administration, told the lawmakers that such a move would also “broaden the federal commitment to conservation and strong stewardship of public land.”

“Tribal land managers perform better, in some ways, than expert managers,” he said.

Washburn was invited to testify before the panel after he wrote a research paper on co-management in January, calling it a “a practical and politically viable path [that] lies between the two extremes of giving away federal public lands to the states or returning all of these lands to the tribes.”

The issue has prompted much debate in the past year, most recently when Yellowstone, the country’s first national park, marked its 150th anniversary last week (Greenwire, March 1).

At the hearing, Doug Kiel, a citizen of the Oneida Nation and an assistant professor of history and humanities at Northwestern University, called the idea of co-management “innovative,” noting that the United States had taken over tribal ancestral lands “through means that were at best morally questionable and at their worst were either genocidal in either intent or effect.”

“The topic of today’s hearing is most of all about respect,” he said.

Melvin Baker, chairman of the Southern Ute Tribal Council, told the panel that his tribe is the only one in the nation with a AAA+ credit rating and that it has “a sterling record of foresight and business acumen.”

“It is essential that tribes have not only a voice in the management of their cultural resources on federal lands but actually have an opportunity to administer them,” he said.

As an incentive, Washburn also suggested rewarding federal land managers who show a “willingness to give up some level of control.”

“Federal officials who have the vision to begin such conversations and successfully develop new ways of approaching the management of public lands should be rewarded,” he said.

Committee Chair Raúl Grijalva (D-Ariz.), who convened the hearing, called the debate “long overdue” and said that co-management will provide a chance for tribes “to work alongside federal agencies” in managing both federal land and resources.

“But if we want to begin this conversation about co-management meaningfully, first we must acknowledge and come to terms with this nation’s history,” Grijalva said. “The European colonization of this continent and the founding of this country are built on the dispossession of land from Indigenous peoples by force, coercion and bad-faith legal agreements.”

Grijalva said he plans to introduce a resolution that would acknowledge the federal dispossession of land from Indigenous communities and call on the federal government to include tribes in the management of federal lands.

“Today is a starting point,” he said.

Grijalva also said that he wants the Government Accountability Office to review how federal land management agencies are working with tribes on their ancestral lands and that he plans to introduce legislation with Sen. Martin Heinrich (D-N.M.) that would provide better protection for tribal sacred sites.

“While the history of land dispossession and violence can never be fully redressed, I believe there are opportunities to bring tribal communities back into the management of their ancestral homelands,” Grijalva said.

One of the witnesses, Chuck Sams, who in November became the first Native American to lead the National Park Service, told the committee that he is committed “to seeking ways to increase opportunities for co-stewardship with tribes in the interest of all peoples of the United States and in accordance with the laws and policies governing the NPS” (Greenwire, Nov. 19, 2021).

Sams also told the panel that he has reestablished a national Office of Native American Affairs at NPS and that he plans to travel to Alaska to meet with members of Alaska’s Native Villages.

Sams announced his travel plans after Alaska Republican Rep. Don Young told him that NPS “does not have a good reputation” in the state and that tribes deserve more control over public land there.

With the hearing taking place on the same day that President Biden banned Russian energy imports, some Republican members said the committee should instead have used its time to focus on energy issues and the war in Ukraine.

“This is an embarrassment, Mr. Chairman,” Rep. Garret Graves (R-La.) told Grijalva, adding that the committee should “exercise its jurisdiction” over energy issues and address high prices.

Similarly, Rep. Bruce Westerman (R-Ark.), the panel’s ranking member, said it would be “a dereliction of duty” for the committee to have a hearing and not bring up rising energy costs.

“There’s a subject that’s being ignored that is far more important that we should all be discussing … and that is the unprecedented energy crisis,” he said.

In a statement released after the hearing, Grijalva said he applauded the ban announced by Biden but said he would not “kowtow” to demands by Republicans and the fossil fuel lobby “for an oil and gas leasing and drilling free-for-all on our public lands.”

“Trading in our environmental progress for corporate profiteering is simply not an option,” he said.