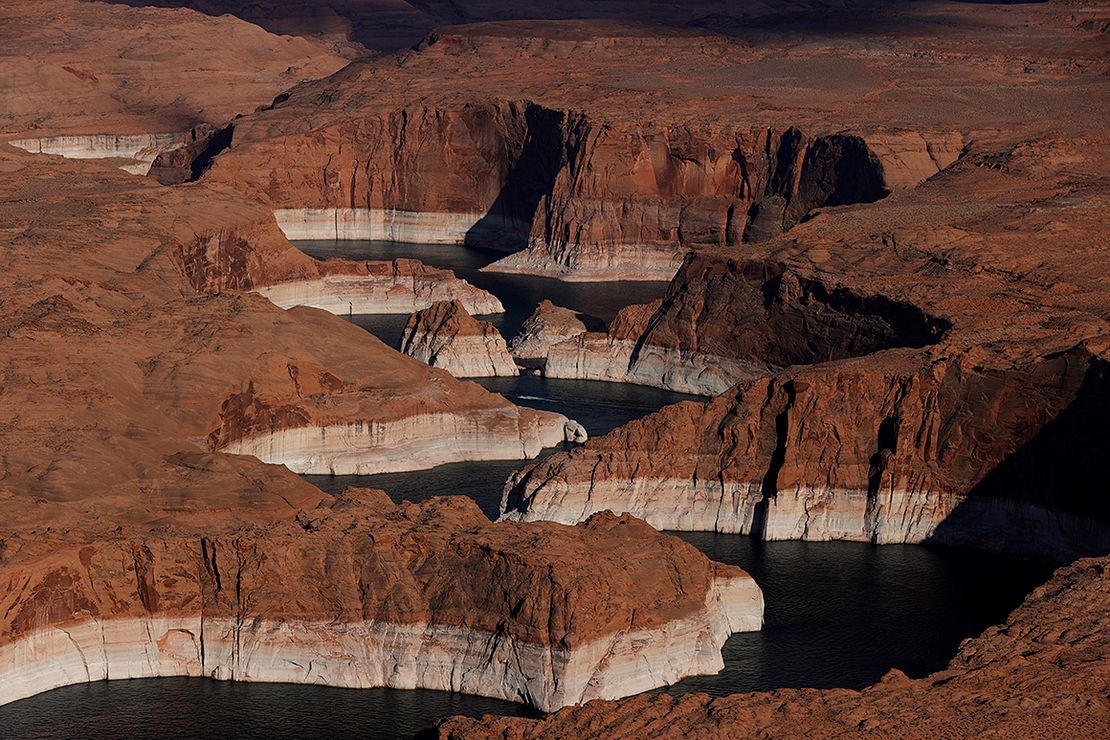 In this aerial view, the tall bleached "bathtub ring" is visible on the rocky banks of Lake Powell on June 24 in Page, Ariz. As severe drought grips parts of the western United States, a below-average flow of water is expected for the Colorado River Basin's two biggest reservoirs, Lake Powell and Lake Mead. Justin Sullivan/Getty Images

In the mid-2000s, seven states, the federal government and Mexico negotiated critical rules for the Colorado River that established how to divvy up its water in a severe drought like it is now facing.

Thirty Native American tribes — with rights to roughly a quarter of all the water in the river — were shut out of those talks.

Tribes want to make sure that doesn’t happen again. The effort offers new challenges for the seven Colorado River basin states and the Biden administration, which has repeatedly pledged to be more inclusive in regulatory efforts that affect Native Americans.

"It is fair to say that tribes were not involved in the negotiation of the 2007 guidelines," said Anne Castle, a former Interior assistant secretary for water and science during the Obama administration. "Tribes will have a seat at the table this time in the negotiation of the next set of rules. The question is what does that look like? And that hasn’t been worked out yet."

The 2007 guidelines expire in 2026 and determine how shortages are allocated across the basin. The Colorado River, which serves 40 million Americans, is currently in the grips of a more than 20-year "megadrought," and federal officials declared a shortage for the first time in August, which means Arizona, Nevada and Mexico will see cuts to their deliveries next year (Greenwire, Aug. 16).

The river’s declining flows due to climate change and drought have put a premium on tribal water.

Negotiations over new operating guidelines are just now getting underway. There is widespread agreement that they will be tougher than the last round because the basin will be grappling with a river that is drying up. Simply put, there is less water to go around.

That’s led to a rush to build out capacity for tribes to meaningfully contribute to the negotiations.

Unused tribal water could provide an important buffer for cities like Phoenix, for example, if agreements are penned to fairly compensate the tribes.

There is also a push for more widespread recognition that tribes may have better ideas for how to use the river.

"You have a group of at least 30 tribal sovereigns in the Colorado River basin who have lived sustainability there for thousands of years," Daryl Vigil, water administrator for the Jicarilla Apache Nation, said at recent conference hosted by the Getches-Wilkinson Center for Natural Resources, Energy and the Environment at the University of Colorado.

"We are having these conversations about sustainability and resiliency, why aren’t we talking to those people who are still here who have been resilient and have lived sustainably?" Vigil said.

The absence of tribes in negotiating current operating guidelines has spurred many mea culpas from the Bureau of Reclamation, the Interior’s Department Western water manager.

"Did we include everyone, particularly the tribes as we should have or would wish to have had? No," said Terry Fulp, a former Reclamation official, at the same conference.

"We tried, but we didn’t know enough about how to try, and we didn’t try hard enough," Fulp said.

But it didn’t stop there. After the operating guidelines were finalized in 2007, Reclamation undertook a basin study on the river’s hydrology. Again, the tribes were largely left out in that 2012 report, said Bidtah Becker, an associate attorney of the Navajo Tribal Utility Authority.

It wasn’t until 2018 that Reclamation finished a new study dedicated to tribal water rights in the basin. The nine-chapter "Tribal Water Study," which was written with the Ten Tribes Partnership, notes that tribal treaty rights are superior to state law and even to the Colorado River Compact, the 1922 document that set allocations among the basin’s seven states.

And it underscored significant challenges as the river’s flows decline and tribes seek to use more of the water they have rights to.

"Tribes in the Basin have a significant claim to a substantial amount of water, which they fully intend to develop and use, but which junior users are currently using," it said, "once Partnership Tribes fully use and develop their reserved water rights, those junior water users will be affected."

Put another way: If tribes were to fully use the water they have rights to — at least 3.2 million acre-feet — it would mean significantly less water for cities and states.

The Biden administration has pledged to work more closely with tribes during the upcoming negotiations.

"There has been a continued emphasis put on greater tribal involvement and participation," Carly Jerla, a senior water resource manager at Reclamation, said at the same conference, "and engaging tribes in a more meaningful way."

But that is more complicated than it appears.

Further complicating the picture: As many as a dozen basin tribes have not fully resolved or quantified their water rights, according to a paper from the Water & Tribes Initiative.

"When we are talking about these questions of how do these things work, where do the pieces fit in more specifically," said Jay Weiner, a water attorney with Rosette LLP, "it really becomes very tribe-specific based on geography, where they are in the quantification process, whether the rights are quantified by settlement or adjudication and whether they are in development as well."

The Water & Tribes Initiative concluded that fully quantifying and resolving tribal water claims "will likely increase the overall percent of tribal water right in the Basin."

There are also capacity issues. Vigil, who leads the Water & Tribes Initiative with Castle, the former Obama administration official, said tribes are expected to quickly develop the same expertise as state governments who have been fighting over the river’s water for a century.

"After almost 100 years not being part of the structure, there is an expectation that we are supposed to be at the table and giving the same input as everyone else," Vigil said. "I think that’s an unrealistic expectation, but tribes have had to step up to the plate."

Some tribes are speaking up about having a seat at the negotiating table. The Southern Ute Indian Tribe, whose reservation is in southern Colorado, has rights to nearly 129,000 acre-feet of the river’s water.

Spokesperson Lindsay Box said the previous operating guidelines did not take into account their and other tribes’ rights.

"Once Tribes begin using their full water allocations, the impacts will be felt by water users downstream who grew accustomed to having the Tribes unused water supplies available," Box said in an email. "The Southern Ute Indian Tribe will preserve tribal water rights which were a part of the Tribes treaties with the United States of America."

Vigil said that there are guiding principles that many of the tribes agree on, particularly within the Ten Tribes Partnership, which includes Box’s Southern Ute Indian Tribe. They include a spiritual reverence for water as sacred.

But in the near term, he emphasized that the tribes are looking for a basic recognition that has long been lacking in the basin.

"Part of the process we are looking for is inclusion. It’s just basic, basic inclusion," he said. "That includes a respect and acknowledgment of tribal sovereignty and the ability to be self determined."