Tribes will co-manage Bears Ears with feds in historic deal 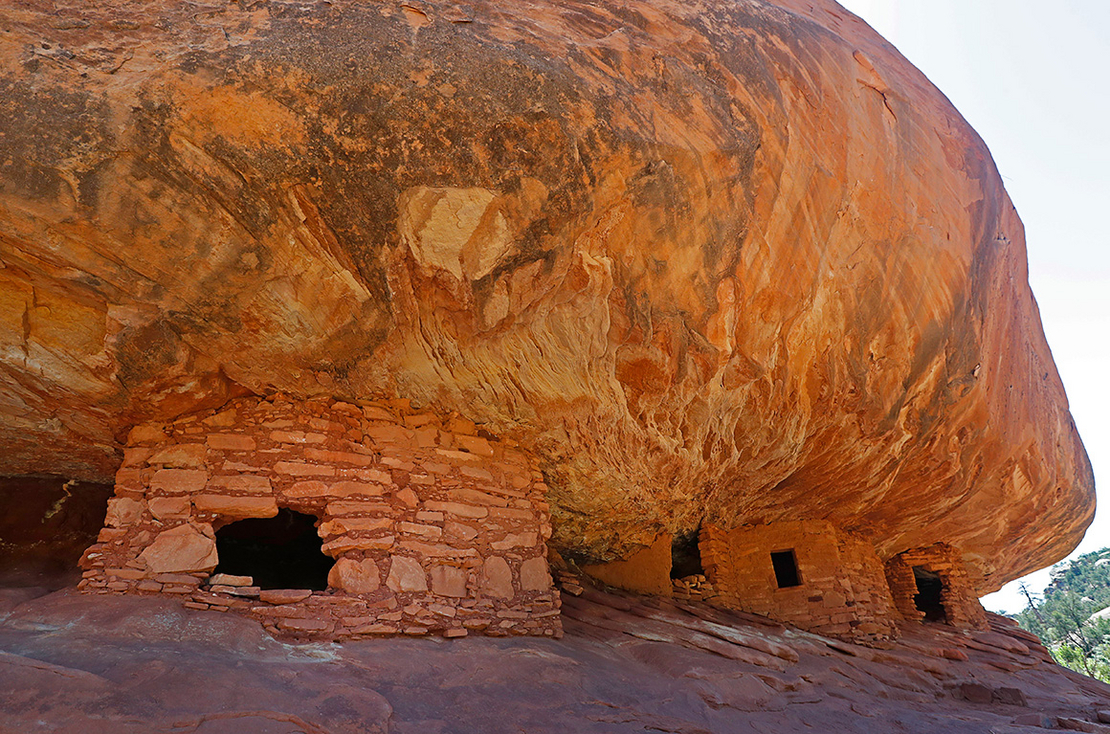 Ancient granaries, part of the House on Fire ruins, are shown here in the South Fork of Mule Canyon in the Bears Ears National Monument outside Blanding, Utah. George Frey/Getty Images

Five Native American tribes have signed an agreement with the Biden administration for sharing management of Utah’s Bears Ears National Monument with the Bureau of Land Management and the Forest Service.

The agencies signed the cooperative agreement with the five tribes of the Bears Ears Commission at a Saturday ceremony in White Mesa, Utah. They also unveiled a new traffic sign just south of the monument displaying the insignias of the Hopi Tribe, Navajo Nation, Ute Mountain Ute Tribe, Ute Indian Tribe of the Uintah and Ouray Reservation, and the Pueblo of Zuni.

The five tribes played a major role in convincing former President Barack Obama in 2016 to establish the 1.36-million-acre national monument on federal land that Native Americans view as sacred.

“Today, instead of being removed from a landscape to make way for a public park, we are being invited back to our ancestral homelands to help repair them and plan for a resilient future,” said Carleton Bowekaty, co-chair of the Bears Ears Commission and the lieutenant governor of the Pueblo of Zuni, in a statement.

Bowekaty added: “We are being asked to apply our traditional knowledge to both the natural and human-caused ecological challenges, drought, erosion, visitation, etc. What can be a better avenue of restorative justice than giving Tribes the opportunity to participate in the management of lands their ancestors were removed from?”

BLM and the Forest Service, which have jointly managed the monument since it was established six years ago, will develop a new management plan for the monument lands cooperatively with the tribal members, the agencies said.

“This is an important step as we move forward together to ensure that Tribal expertise and traditional perspectives remain at the forefront of our joint decision-making for the Bears Ears National Monument,” BLM Director Tracy Stone-Manning said in a statement. “This type of true co-management will serve as a model for our work to honor the nation-to-nation relationship in the future.”

In a statement today, the Interior Department said, “This is a first of its kind agreement — putting into practice what was envisioned by both Presidents Obama and Biden in terms of how the monument will be co-managed with the Tribes. The specificity of the agreement and the dedication of resources is moving us toward making that vision a reality.”

Homer Wilkes, the Agriculture Department’s undersecretary for natural resources and environment, added that the cooperative agreement “outlines a common vision for management of Bears Ears National Monument and protection of these sacred lands that are important to so many.”

The establishment of the Bears Ears National Monument has been a source of fierce debate in the West since Obama designated it in 2016.

Former President Donald Trump cut the size the national monument dramatically — down to 202,000 acres, or 15 percent of its original size — in late 2017. Trump’s proclamation divided the monument into the Indian Creek Unit, with 72,000 acres, and the Shash Jaa Unit, with about 130,000 acres.

Trump’s decision sparked arguments over a president’s authority to revise the boundaries of monuments established by previous presidents under the Antiquities Act of 1906; it also fueled numerous resulting lawsuits.

But the debate over the size of the monument and its boundaries continues.

Indeed, the cooperative agreement with the five tribes comes less than a month after the state of Utah approved a land-swap agreement with Interior to exchange 161,000 acres of state lands within the monument boundaries for federal lands elsewhere (Greenwire, May 19).

The cooperative agreement signed Saturday notes that Bears Ears “is both a cultural living space for Tribal members — holding the history of their traditions and cultural practices — and a location that is integral to their ceremonial practices and cultural traditions, as well as other activities and rituals.”

The land within the national monument, it adds, “has been continually used by members of Tribal Nations since time immemorial to heal, practice their spirituality, pray, rejuvenate, and connect with their history.”

Thus, the cooperate agreement “will serve, in part, to facilitate communication and understanding between the Tribal Nationals and the Federal land managers to better protect ceremonial and traditional activities within the monument, as well as to preserve and integrate traditional knowledge of the region and apply that knowledge to inform Federal land management decisions.”