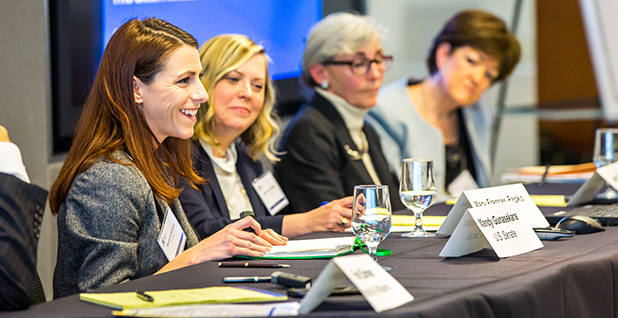 To understand how quickly President Trump’s energy and climate team has turned over since his inauguration, one meeting held about a year ago offers some perspective.

Organized by then-White House energy adviser Mike Catanzaro, the meeting on June 21, 2017, convened top aides from across the administration. The subject was "Climate policy meeting." It followed weeks of questioning by reporters about Trump’s views on global warming.

The president had just announced, three weeks earlier, that the United States would exit the Paris climate accord, and his administration was working to dismantle carbon dioxide regulations for power plants. In the White House briefing room, Trump’s press secretary declined to say whether the president accepted that climate change was happening.

"All, the purpose of this meeting is to explore whether, post Paris, we need to develop, or simply piece together from what already exists, a policy proposal that can be characterized as the ‘Trump climate policy,’" Catanzaro said in an email. "Feel free to bring others from your offices if need be."

The meeting was one of dozens discovered through public records released through a Freedom of Information Act request by the Sierra Club. It sheds light on all the players — past and present — who have shaped the administration’s policies on vehicle fuel emissions, the Clean Power Plan and the renewable fuel standard.

Two others at the meeting have been elevated to new roles, leaving their old slots empty. They are Francis Brooke, who left Pence’s office to take Catanzaro’s position, and Mary Neumayr, who has been nominated to lead the Council on Environmental Quality after serving as its de facto head.

Five remain in their spots, for now. They include Pruitt’s chief of staff, Ryan Jackson, who has been miffed by his boss’s ethics missteps, according to sources. The others are Brian McCormack, chief of staff for Energy Secretary Rick Perry; Mandy Gunasekara, a senior EPA adviser on air issues; John Moran, associate counsel to the president; and Jim Herz, associate director for energy, natural resources and science at the White House Office on Management and Budget.

The White House also convened a Sept. 20, 2017, climate policy meeting with staffers for the National Economic Council and agency deputies such as Dan Brouillette at the Energy Department and David Bernhardt
at the Interior Department. The invitation said, "The purpose of the meeting is to discuss the Administration’s position on domestic and international climate change policies."

Invitations for other meetings show who’s involved in the daily policy apparatus.

The records also show that staff members from a number of other offices outside the traditional energy policy mind hives of EPA, DOE and Interior have collaborated on the administration’s agenda.

The State Department had a number of people at the planning meeting: John Thompson, who has taken the lead on negotiating the Kigali Amendment; Mark Eshbaugh, a former National Security Council official who’s now at the State Department’s policy office working on energy, environment and science issues; Trigg Talley, a career official who runs the Office of Global Change; attorney Andrew Neustaetter; and policy staffer Chris Allison.

Brandon Middleton of the Justice Department’s Environment and Natural Resources Division had several meetings with EPA and other staff on the Clean Power Plan, a regional haze dispute in Utah, and natural gas and oil policy. Middleton served as a former Senate staffer for Attorney General Jeff Sessions.

Aaron Szabo, a former OMB aide who is now senior counsel at CEQ, was a frequent presence for major policy discussions. He has been involved with the Clean Power Plan and ozone policy and was asked to dial in for a high-level meeting on EPA’s regulatory agenda. Szabo has previously worked at the Nuclear Regulatory Commission and at OMB under President Obama, according to his LinkedIn profile.

Szabo and many of his former OMB colleagues participated in an Aug. 25, 2017, meeting with the subject line "Natural Resources & Environment Meeting," providing a look at players in the White House’s policymaking machine. They include career staffers like Jim Laity; assistant general counsel Varun Jain; and Dominic Mancini, deputy administrator at the Office of Information and Regulatory Affairs.

Career OMB staffers Rich Theroux and Chandana Achanta participated in a Sept. 7, 2017, meeting with Hyundai Motor Co. Ja’Ron Smith, who is the director of urban affairs and revitalization, was also invited — he was director of external affairs for Generation Opportunity, a grass-roots civic engagement organization linked to the Koch network that focuses on millennials. Magdalena Delahoyde, a former Heritage Foundation office manager who is now at OMB, sent out the invite for the event.