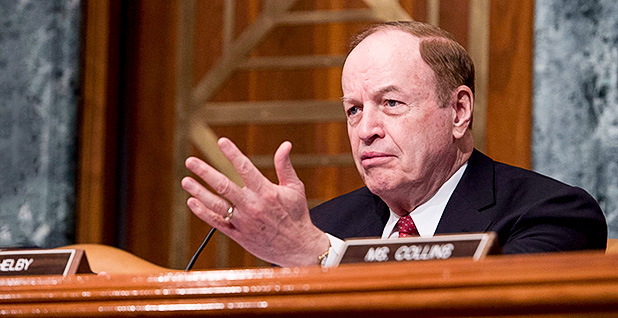 A détente over "poison pill" amendments has allowed Senate appropriators to advance seven of the 12 annual spending bills in rare bipartisan fashion, but it remains to be seen whether the truce will continue when the first so-called minibus package hits the floor next week.

Following completion of the National Defense Authorization Act on Monday evening, the chamber is expected to turn to a three-bill package that includes the $43.7 billion energy and water spending bill, as well as funding for military construction and veterans and the legislative branch.

While both sides yesterday continued to hold back contentious amendments in committee to advance the Interior-EPA and Commerce-Justice-Science measures, Appropriations Chairman Richard Shelby (R-Ala.) said the process for floor debate had yet to be determined.

"We’ll get it all together," Shelby told reporters, noting that Majority Leader Mitch McConnell (R-Ky.) and Minority Leader Chuck Schumer (D-N.Y.) determine floor strategy for each side. "We’re hoping to continue to work together."

Sen. Lamar Alexander (R-Tenn.), who will manage the floor debate for the Energy-Water measure, said yesterday he hoped to make opening statements on Monday evening and start voting on amendments on Tuesday.

Asked whether the amendment truce will hold, he responded, "We’ll see." Alexander said he expects the chamber to take some controversial votes.

"That’s what the Senate is about, is resolving controversial issues," he said. "But as long as the amendments are related to the bill, I think we should do our best to give senators an opportunity to have their say."

Sen. John Hoeven (R-N.D.), an appropriator, told E&E News yesterday he was hopeful the Senate can begin moving spending bills next week by having an "open amendment" process that will build some goodwill in the chamber.

If "people feel there is an open enough process, we can engage in regular order," said Hoeven, who added that spending bills in recent years have often been blocked or never even called up because senators were not given the chance to offer their amendments.

New Mexico Sen. Tom Udall, the top Democrat on the Interior-Environment Appropriations Subcommittee, told E&E News yesterday that he hopes members from both parties will avoid offering amendments that attempt to authorize on spending bills, a trend that he says should be curtailed.

"The authorizing committees need to be working on this stuff," he said following yesterday’s markup. "It’s so broken that people feel if anything’s moving they’re desperate to get anything on it."

"I feel good about it," he said of that language.

Interior-Environment Subcommittee Chairwoman Lisa Murkowski (R-Alaska), who is angling to see her bill packaged into a separate minibus that may hit the floor later this month, said she’s hoping to avoid poison pill amendments.

While the committee truce allowed her bill to pass with unanimous backing yesterday, Murkowski noted the rest of the Senate had not agreed to the same principles.

"I think it remains to be seen, but next week should be pretty telling," she told E&E News.

Meanwhile, in a sign of how sensitive votes can be on appropriations bills, the Environmental Defense Fund announced yesterday it was launching digital ads against vulnerable GOP House appropriators who backed an Interior-EPA bill that the group argues would cut crucial clean water, clean air and enforcement programs.

"They are going to have to choose between being a rubber stamp for Trump’s attacks on clean air and the support of moderate constituents. They can’t have it both ways," said Joe Bonfiglio, president of EDF Action.

The appropriators being targeted initially are Republican Reps. David Valadao of California, Kevin Yoder of Kansas and Scott Taylor of Virginia. All three face competitive re-election bids this fall.